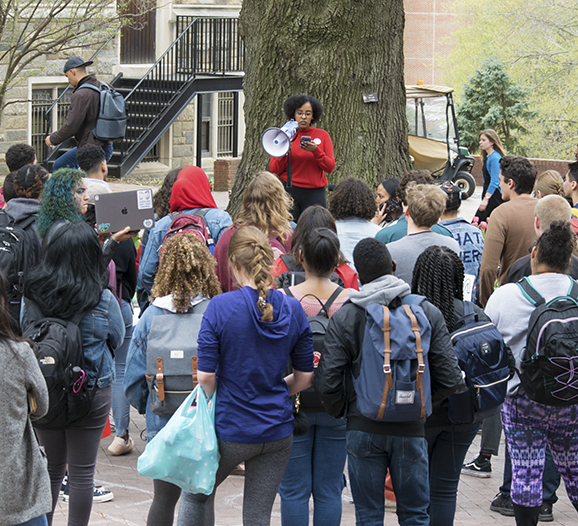 Georgetown University administrators reiterated they are moving forward with a reconciliation fund they announced last year to benefit descendants of the 272 enslaved people sold by the Maryland Province of the Society of Jesus in 1838, but did not promise to implement the semesterly fee students overwhelmingly supported in 2019, according to student representatives to the board of directors.

In the 2019 referendum, students voted to add a $27.20 semesterly fee to all undergraduates’ tuition to benefit the descendants of the GU272. The university made its first major announcement addressing the result of the referendum in October 2019, deciding to establish a $400,000 reconciliation fund in lieu of the semesterly fee, as well as community-based projects benefiting descendants.

After an Oct. 13 meeting with the board of directors’ Working Group on Student Affairs, Eliza Lafferty (COL ’21) and Escadar Alemayehu (NHS ’22), student representatives to the board, told campus media in a news conference that the university is deliberating over which projects to fund in reconciliation efforts. Administrators intend to involve descendants and the Georgetown community in the decision-making process. Members of the GU272 Advocacy Team were not included in the board meeting and were not consulted in preparation for the Oct. 13 meeting.

“It is unclear to what extent the university plans to implement the referendum,” Lafferty and Alemayehyu wrote in their report of the meeting.

Alongside the October 2019 announcement of a $400,000 reconciliation fund, the university also launched an advisory board composed of faculty, students, graduates, staff and descendants. That fall, they also announced the formation of two additional advisory groups to continue the university’s academic and research initiatives and public history efforts, as well as two university projects focused on expanding understanding of and memorializing Georgetown’s history in relation to slavery.

A university spokesperson confirmed the university plans to share an update in the coming weeks on upcoming steps the university will take to engage with its history of enslavement and current racial injustices on and off campus. However, the spokesperson did not commit to the semesterly fee or provide a concrete timeline for the impending announcement.

The spokesperson clarified that Ferrara’s reference to the referendum in the Oct. 13 meeting did not promise the university will implement the semesterly fee. No tuition fees relating to the GU272 referendum will be collected, according to the spokesperson.

Instead, the university said it will encourage community members to contribute to the reconciliation fund established in 2019.

“As an initial step, a fund — with financial resources that will meet the $400,000 commitment the University made in October 2019 (based on the amount of the proposed student fee) — has been established. While mandatory fees will not be collected, we will be inviting all members of our community to contribute to the fund,” the spokesperson wrote.

Because the GU272 Advocacy Team had asked administrators for an update on their implementation plan, Ferrara followed up with an email after the meeting stating the university’s plans to fulfill last year’s announcement.

“The Board Student Affairs Committee met earlier this past week. At that meeting, I provided a brief update on our work in slavery, memory, and reconciliation. I shared that while the necessary pandemic response had slowed down various initiatives, we were planning now to re-engage a number of efforts,” Ferrara wrote to student activists.

Ferrara intends to meet with the GU272 Advocacy Team to discuss implementing the reconciliation fund.

“One of those would be our work to move forward on establishing a reconciliation fund. As was discussed at the meeting, the plan is to engage you and other members of our community in this work,” Ferrara wrote. “We will set up a time to discuss further.”

GU272 Advocacy Team member Nile Blass (COL ’22) emphasized that the reconciliation fund fails to carry out the demands in the 2019 student referendum.

“It was clear that whatever they were doing was going to be functionally different and separate from the referendum. They were not going to overlap in any meaningful way at all,” Blass said during a press conference with The Hoya.

Although student representatives to the board say the referendum has been before the board of directors for five meetings since June 2019 and the university has explained the dialogue with GU272 descendants is ongoing, little contact has been made by the university with the GU272 Advocacy Team since their last meeting in February, according to Blass. She worried the university’s announcement is largely performative.