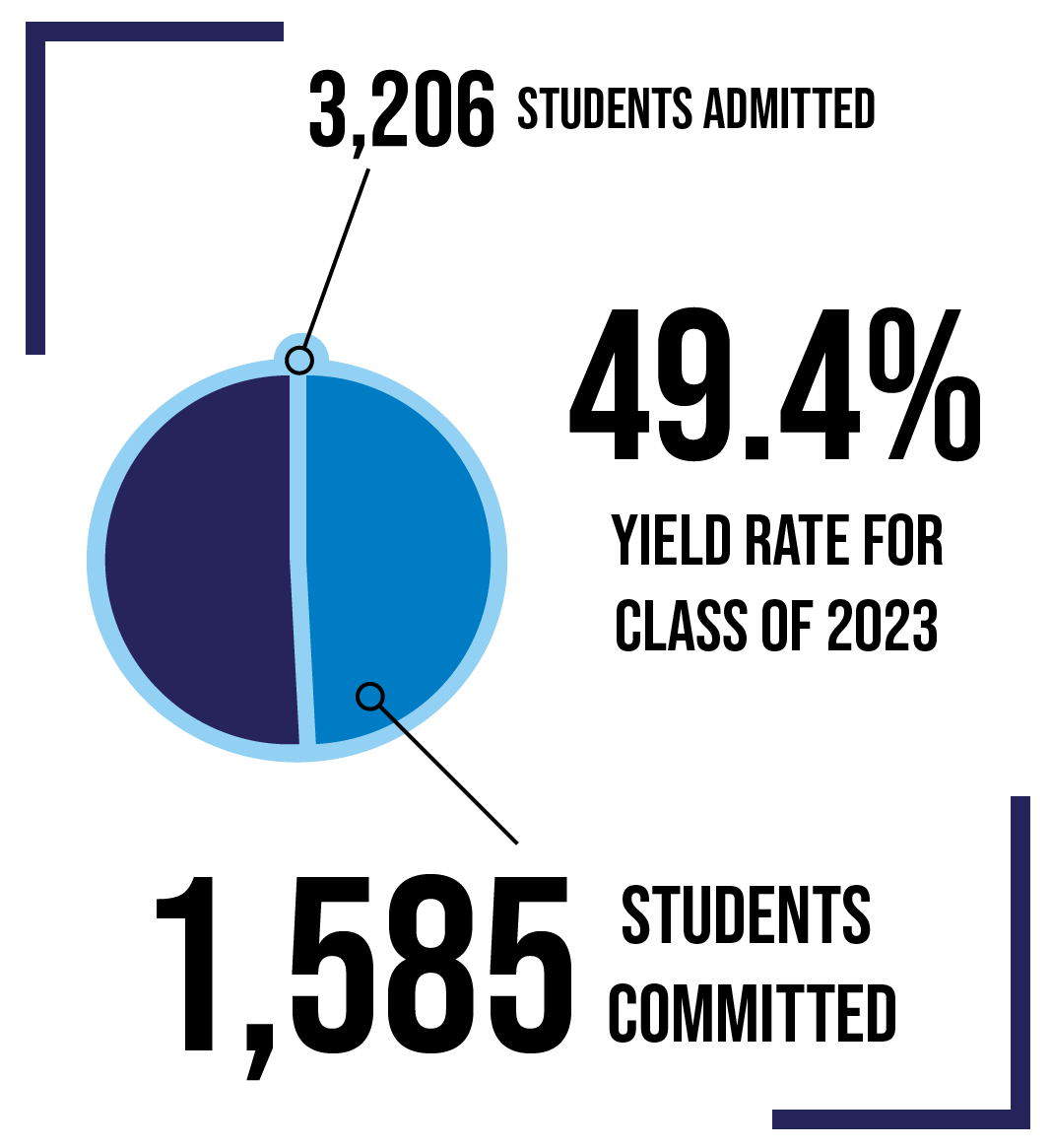 Georgetown University’s admissions yield rate for the Class of 2023 decreased slightly to 49.4% from last year’s 51% after the school’s admissions rate fell to the lowest in university history this year.

The admissions yield rate refers to the proportion of individuals who have paid their May 1 enrollment deposit to confirm their enrollment at Georgetown. Of the 3,206 admitted students, 1,585 students have committed to Georgetown as of the May 1 deadline, according to Dean of Undergraduate Admissions Charles Deacon (CAS ’64, GRD ’69).

The university plans to increase the number of enrolled students in the Class of 2023 to 1,650 by admitting students from the waitlist between now and September, Deacon said in an interview with The Hoya.

“We’re in contact with probably 50 people right now, hopefully of whom maybe 30 or 40 will end up committing,” Deacon said. “Then we’ll put a third group, maybe 100 people or 75, on an extended list, from which we’ll take the remaining people as we need them.”

The expected waitlist admissions mark a change from last year when the College, SFS and MSB all exceeded their target enrollment numbers after the university received a record number of applications. As a result of this overcommitment, students on the waitlist had a lower chance of admission.

It is better to keep the number of admitted students conservative in the first round and admit students from the waitlist to fill in the gap, rather than admit more students than the university has space for and decrease the number of transfer students admitted to remove the discrepancy, according to Deacon.

The university cannot exceed its admissions cap because of a 20-year agreement between the university and the local community that limits the total number of undergraduate students to 6,675, according to the 2017 University Campus Plan.

The yield rate and transfer acceptance rate influence each other every year, and the university prefers to admit a conservative number of students in the first round rather than admit more students than the university has space for and have to adjust, according to Deacon.

“These two numbers do work together,” Deacon said. “Last year, when we were over for the first time in maybe 50 years, we ended up having to cut back the number of transfer students to balance it out.”

The university has sent out approximately 140 offers of enrollment to potential transfer students, with the expectation that 100 of those students will commit to the university by the June 15 deadline. Spots will be available for 50 more transfer students to start in the spring semester, continuing a practice that began last year.

The class of 2023 is expected to maintain similar numbers of black and Hispanic students enrolled from the previous class, with 10% of students identifying as black and 14% identifying as Hispanic. The rate of Asian American students planning to enroll at Georgetown has significantly increased to 22% of the total incoming class over the last two years, compared to 15% of enrolled students who originally enrolled in the Class of 2021.

The Class of 2023 also features a degree of geographic diversity, with 49 states represented in the incoming cohort. All states had applicants to the university, but Wyoming was the only one that did not have any students accepted to Georgetown.

A total of 128 international students have submitted enrollment deposits to Georgetown, marking a slight decrease from last year’s 137 students.

Rising testing scores have led to a greater weight placed on students’ individual experiences in determining admission, according to Deacon.

“It’s actually a good thing, because it means we can stress the personal circumstances, whether it be personality qualities, which it the thing we look most at, or other things, such as geographic diversity or unusual talents,” Deacon said.

Still, Deacon acknowledged that in such an admissions pool, students still need to have high test scores to be competitive with their peers.

“As the overall scores continue to move up, there’s less to discriminate among them,” Deacon said. “You have to have pretty good scores to be in the running.”