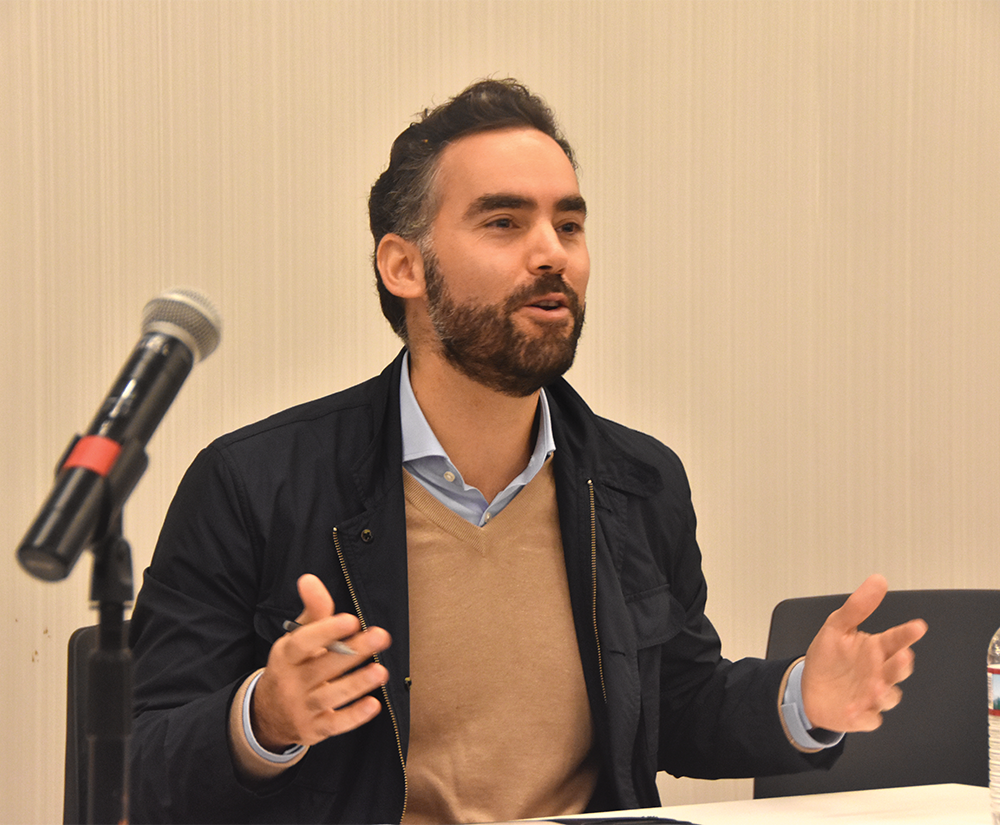 A reporter’s Hispanic heritage is not at odds with objective coverage of President Donald Trump, said Mexican journalist Enrique Acevedo in an event in the Healey Family Student Center on Monday.

Acevedo said the perception of a journalist’s Hispanic background creating a reporting bias is unfair.

“We were criticized during the campaign for not following the traditional principles of journalism, and what that meant was we were being very critical,” Acevedo said. “These policies are not in the best interest of our audience, of the Hispanic community in this country, again not only in terms of immigration but in terms of job creation, in terms of access to healthcare, in terms of protecting the environment.”

Acevedo is the news anchor of Spanish newscast Noticiero Univision — which last year won an Emmy Award for Outstanding Newscast or News Magazine in Spanish — and a frequent contributor to NPR’s Here and Now. The event was co-hosted by the Georgetown University Graduate Association of Mexican Students and The Hoya.

Early in the campaign, Univision was denied press credentials to cover many of Trump’s events.

At the event, Acevedo said although the White House has cooperated with Univision and other hispanic outlets, higher administration officials remain mostly inaccessible.

“You think that after everything that’s happened, that there’s not a professional relationship with the administration, but there is: they have someone who speaks Spanish who can go on air and provide a response to our audience in Spanish,” Acevedo said. “What we don’t have are senior voices from the administration, including, of course, the president.”

There are 56.6 million Hispanics living in the country as of 2015, according to the United States Census Bureau. In an exclusive interview with The Hoya, Acevedo said journalists must be careful not to misrepresent the views of the Hispanic community for political reasons.

“Many Hispanics are socially conservative — not only the older generations but also the younger generations — so I feel that their views are not represented accurately, because some of the conservative leaders in Congress, in society, are reticent in speaking to outlets like Univision and others,” Acevedo said.

According to Acevedo, every Republican presidential candidate since Bob Dole, who ran for executive office in 1976, has given interviews to Hispanic media.

Acevedo said Hispanic reporters benefit from a close relationship with their own community, which gives them an added dimension of context in their coverage of politics and national issues.

Acevedo cautioned against thinking about Hispanics and their interests as singular.

“It’s a sophisticated audience — much more than you’d think. Foreign affairs are constantly at the top of the concerns,” Acevedo said. “Terrorism, national security issues, are major issues for Hispanics. There’s an appetite to understand what’s going on.”

The solution to this disparity between perception and reality, Acevedo argued, is to step away from the D.C. echo chamber.

“This is probably the most important conversation we need to have right now: How do we solve our political divide?” Acevedo said. “Ironically, it’s about having more person-to-person conversation and less of this virtual experience where everything has to fit in 140 characters and it seems very artificial.”

One of the ways to achieve that human contact, Acevedo said, is to emphasize in-person reporting over commentary, which might seem distant.

“Some very accomplished journalists have been reduced to the role of moderators,” Acevedo sa id. “We need more people knocking on doors, asking questions, going through documents than people just moderating a discussion for an hour.”

Acevedo remains hopeful in the journalistic mission of highlighting the stories of communities that might be singled out or disproportionately affected.

“This is why we became journalists, because our work is very consequential, especially to the lives of our audience at Univision,” Acevedo said. “It seems like the stakes are higher than ever right now.”