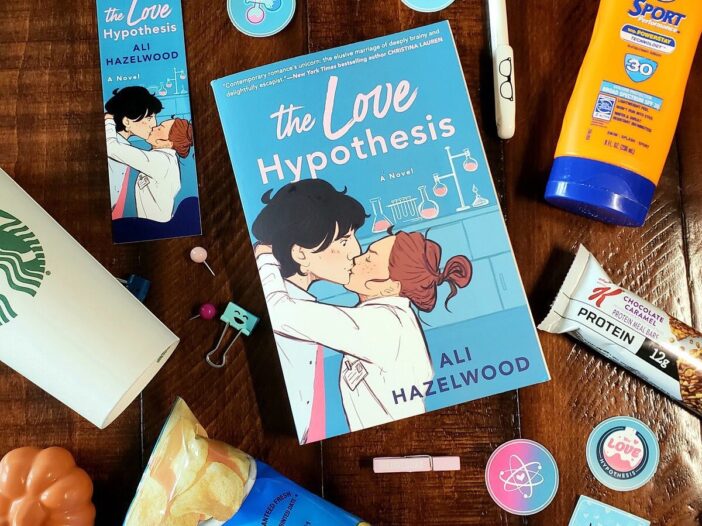 This article discusses sexual assault. Please refer to the end of the article for on- and off-campus resources.

Fake dating, STEM, academia and an attractive love interest — what more could you want from your standard rom-com?

Ali Hazelwood’s debut novel “The Love Hypothesis” begins when Olive Smith, a Stanford PhD candidate, kisses Adam Carlsen, a young professor well known for his harsh disposition. The two then enter into a fake relationship — Olive to prove to her best friend Anh that she is over her ex-boyfriend and Adam for his own mysterious reasons. Of course, these fake feelings become much more real with every weekly Wednesday date and instance of forced proximity.

This contemporary romcom was released in September 2021, quickly rising to fame on the novel-reviewing side of TikTok, aptly called BookTok, where the tag #thelovehypothesis has reached almost 50 million views. Fitting well into the romance literature trend that has taken over online reading platforms, TikTok reviewers have specifically noted that the book possesses many of the current popular romantic tropes frequently discussed in the app’s literary community, such as the fake dating trope.

The narrative success of “The Love Hypothesis” seems to lie in its uniquely scientific setting. Hazelwood, a romance writer and professor, initially moved to the United States to pursue a PhD in neuroscience. Her expertise in the field shines throughout the novel, as readers are able to gain a fascinating and almost horrifying insight into the world of academia, rife with abuses of power, low wages and a lack of diversity.

Olive and Anh experience imposter syndrome and blatant sexism in both implicit and prominent ways within their program at Stanford. Hazelwood skillfully navigates the feelings of shame, anxiety and anger after an instance of sexual harassment.

However, the novel’s reliance on the tropes of miscommunication and forced intimacy, in addition to its relatively typical characterization of the leads, are some of its most frustrating aspects. For instance, the primary love interest Adam is one-dimensional, feeding the cliche of the brooding man with a tragic backstory. Adam’s past is certainly sad, but he does not have a character beyond it. Despite 300-plus pages of seeing Adam from Olive’s perspective, it is still unclear why she loves him at the end of the story. Is it just that he is nice to her? Or that he is smart? That he’s hot?

Other characters in the novel are similarly flat, as Olive’s roommate and Adam’s best friend are just accessories to the romance, lacking individual personalities. While Olive herself does feel like a fully developed person, some of her decisions are narratively questionable, completely taking the reader out of the novel. In one scene, she literally sits on Adam’s lap during a lecture because of a lack of space. All of us have been in crowded classrooms before and have somehow managed not to sit on our professors’ laps!

The most concerning aspect of this novel however, is the way that Olive and Adam begin their fake relationship. Olive kisses Adam in the lab, trying to fool a friend into thinking she was on a date. She asks for consent before doing so, yet Adam actually does not reply before she thinks she hears a yes.

Though many fake dating tropes start with such an “unexpected” kiss, it is confusing why this book does, considering its large attention to consent. While Olive is regretful and apologetic, if the roles were reversed — an older male professor kissing a younger female student in a professional space — it would instantly be questioned. This scene feels like a workaround to the complex issue of consent, which is at odds with the careful consideration given to consent throughout the rest of the novel.

At its heart, however, “The Love Hypothesis” is enjoyable to read and hard to put down. It is the type of romance novel that feels a little bit like cotton candy — sweet, fun and fairly delicious, but somewhat tooth-rotting. So if you are just looking for a good romance to distract from never-ending exams and papers, “The Love Hypothesis” is the perfect choice. Otherwise, temper your expectations!