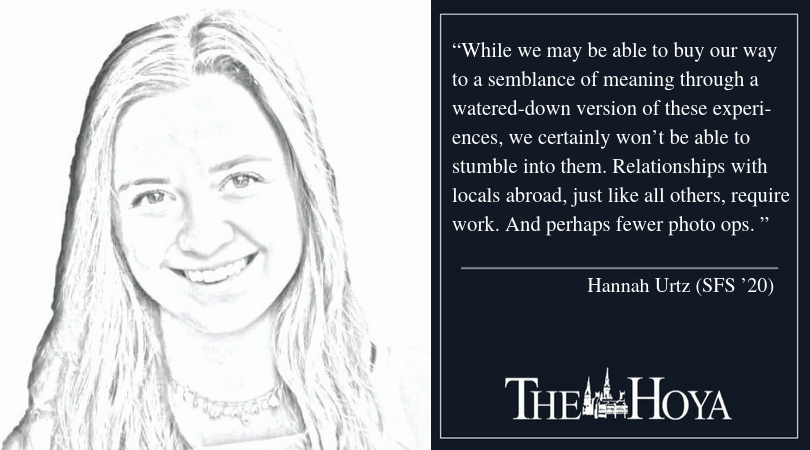 A few weeks ago, I was hiking with my classmates in Petra, the Bedouin site of ancient Nabatean ruins and a renowned UNESCO world heritage site in Jordan. The narrow canyons and spectacular rock carvings were dotted with vendors selling everything from bottled water to miniature replicas of the site. Marketing their goods, many of the men would often call out to us as we passed by.

At first, I was intrigued, thinking back to the glamorized shots I had seen on Instagram of tourists — somehow much less sweaty than I was — appearing to have a jovial time with a Bedouin man dressed in traditional garb. The photos I had seen portrayed genuine human connection: Worlds merged while overlooking a spectacular view of 3,000-year-old ruins.

However, listening to the man selling the illusion of an experience and watching other tourists staging the perfect shot, I paused. It was all too contrived.

While orchestrating scenarios for a story or photo is often acceptable, time spent studying abroad should be driven by authentic cultural exchange. Without deliberately pursuing meaningful interactions with locals, students in new countries are missing out on a huge part of the experience.

As students in foreign lands, we must consider how we interact with our host country and strive for valuable interactions with locals. Meaningful cultural exchange can shatter stereotypes and misconceptions about a place and make one feel significantly more comfortable in their new and foreign environment. It deepens the abroad experience, making it richer and more worthwhile.

A lack of authentic cultural interactions has underscored my time here in Jordan. I often feel disconnected from the locals I came to learn from and wonder how I can effectively seek out and participate in these experiences without being exploitative or derivative.

By and large, many of my organized cultural exchange activities for study abroad students, like soccer matches between Americans and Jordanians and discussions on differences between our societies, have fallen short of the mark. They often feel disingenuous; U.S. students sit patiently, waiting for their randomly assigned “cultural buddy” to expose the underbelly of Amman over a lunchtime conversation. I’ve often had to remind myself that I am not entitled to an all-access pass to Jordanian culture and that I must put in the effort to build relationships that allow me to feel integrated into my temporary home.

In my quest for this kind of connection, I have triumphed in certain arenas. For instance, at my internship, where I work with several Jordanians and conduct myself primarily in Arabic, I thrive. A friendly office atmosphere and several spontaneous lunch meetings in which I had easy and natural conversations have left me feeling energized and fulfilled, and truly connected to the country in which I live.

I have also failed, like at my program’s organized dinner with Jordanians where I spent the entire time talking with my U.S. friends when the conversation with our designated “buddy” fell flat.

However, not all experiences devoid of pure cultural understanding are necessarily exploitative, and many are certainly worth doing. The tourism industry has been a huge boon for the Jordanian economy in the past decades, and it can play an important role in facilitating a dialogue through greater exposure to the country.

As I finish out the remainder of my semester, I will try to chase the fulfilling moments of sincere connection. I will maintain an open mind in new conversations with unfamiliar faces, and I’ll let myself struggle and flourish in the discomfort of it all.

While we may be able to buy our way to a semblance of meaning through a watered-down version of these experiences, we certainly won’t be able to stumble into them. Relationships with locals abroad, just like all others, require work. And perhaps fewer photo ops.