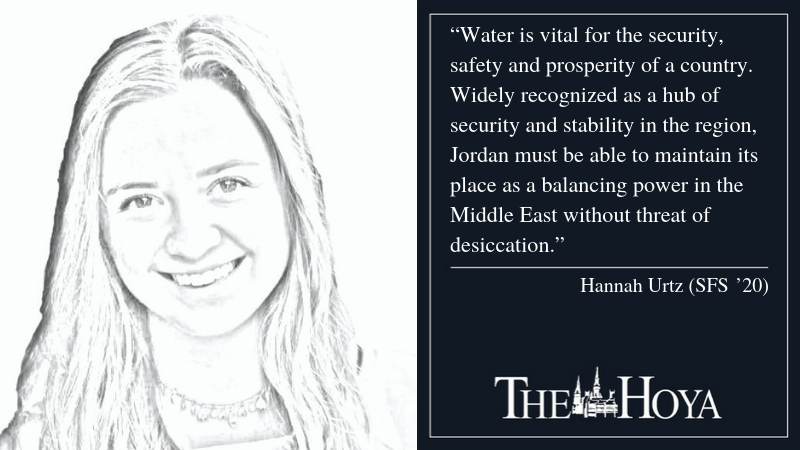 My first week in Amman, I ran out of water in my apartment. Midway through my morning shower the stream slowed to a trickle, before sputtering and completely giving up. The kitchen sink soon followed suit, as did the toilet, washing machine and ice maker. My apartment was bone-dry.

Like all residents of Jordan, my roommate and I receive our running water on a weekly basis by way of delivery truck. Individual tanks sit on the roof of our apartment building, funneling water into the designated units. If well-allocated, the water from the tank should last seven days. Clearly, we hadn’t yet figured out how to allocate our supply, and our water tank ran dry two days before it was scheduled to be refilled.

While those 48 hours without running water were tougher — and admittedly, smellier — than I would have liked, my personal drought demonstrates only a microcosm of what Jordan suffers as one of the most water-poor countries in the world.

Water scarcity poses one of the greatest threats to the future stability of the Middle East and should be treated with the same consideration as other geopolitical conflicts in the region. Without international cooperation to address the growing water crisis in Jordan and its neighbors, the area will suffer from desiccation and destabilization.

The World Bank defines water-scarce countries as those with less than 1,000 cubic meters of water per person annually. With the lowest amount of per capita available water in the world, Jordan can provide less than 15 percent of this baseline figure.

While Jordan currently receives 80 percent of its water from aquifers, estimates suggest these will be empty in 10 years’ time.

The water scarcity crisis was brought on by a long-term drought, transboundary water competition and a strain on existing resources resulting from the influx of hundreds of thousands of Syrian refugees since the start of the Syrian civil war.

Moreover, the Jordan River, which flows into the Dead Sea along the Jordan-Israel border, is suffering from severe dehydration. In the 1960s, Israel built a pumping station that diverts water from the Jordan into a pipeline system that supplies water throughout the country. In the 1970s, Jordan and Syria began diverting water from the Yarmouk, the lower Jordan River’s main tributary.

Nearly 100 billion gallons of water are pumped from the river each year, at a rate faster than they can be replenished. Meanwhile, the Dead Sea has shrunk by 40 percent in the past 60 years, and continues to decline are at an average rate of three feet per year. Yet, while all surrounding countries recognize the rate of decline, no one wants to sacrifice their access to the source.

The situation is grim — perhaps made even more so by the political implications of the shortage in the region. Experts argue that declining water rates decrease the possibility of self-sufficiency in the region, as countries like Jordan must rely on allies — and their stipulations — to help address water and crop shortages.

Projects with the greatest potential for sustainable solutions are also the most capricious, relying on the often volatile nature of relationships between countries that don’t often see eye-to-eye.

Most recently, in July of 2017 an Israeli-Jordan desalination project was put on hold after an Israeli security guard shot and killed two Jordanians at the Israeli embassy in Amman, prompting a six-month diplomatic standoff. The project aimed to slow the rate of Dead Sea evaporation and send fresh water to southern towns in Jordan and Israel

Meanwhile, some advocates believe regional cooperation on water scarcity issues could pave the way for peace between Israel, Palestine and Jordan. Water boundaries and climate politics are merely among the challenges to the tenuous relationships in the region. However, perhaps the threat of extreme water poverty could bring estranged nations together.

While policymakers and aid and development agencies focus their efforts on refugees and migration issues, terrorism and extremism, and oil control in the region, water security must be given its due consideration as a regional security issue with global implications.

Water is vital for the security, safety and prosperity of a country. Widely recognized as a hub of security and stability in the region, Jordan must be able maintain its place as a balancing power in the Middle East without threat of desiccation.

The solutions, of course, are complex and multifold. Jordan already has taken decisive steps to allocate and ration water and has developed technology that makes the most of existing liquid resources to accommodate its swelling population. Yet, this certainly is not merely a task for climate scientists and irrigation experts; rather, it is a matter of international geopolitical security, and deserves to be addressed as such by global institutions and governments alike.

In the meantime, I’ll be joining my fellow Amman dwellers in taking shorter showers — for peace’s sake.