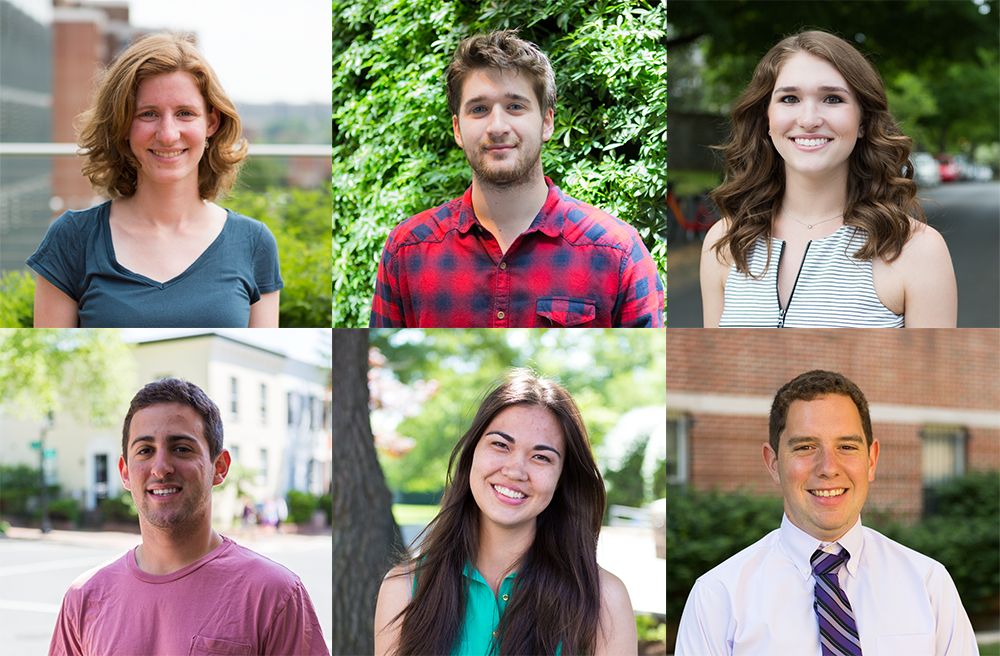 Six students will be honored as valedictorians and Dean’s Medal recipients this weekend for achieving the highest GPAs in their respective schools, with a tie between three students in the College of Arts and Sciences.

Aletha Smith (COL ’15), Elise Widerlite (COL ’15) and Paul Bucala (COL ’15) were jointly named the valedictorians of the College, all with perfect 4.0 GPAs. Smith was selected to speak at the College’s Tropaia ceremony after she and Widerlite submitted sample speeches. Evan Fierstein (MSB ’15) was named valedictorian of the McDonough School of Business with a 3.99 GPA and will speak at the MSB Tropaia ceremony today.

Mina Pollmann (SFS ’15) also maintained a perfect 4.0, while Blake Meza (NHS ’15) had the highest GPA in the School of Nursing and Health Studies, a 3.967. Both will be awarded their school’s Dean’s Medal, as the School of Foreign Service and the NHS do not appoint valedictorians.

Smith majored in German and English and played the piccolo in the pep band. She spent the spring semester of her sophomore year studying in Germany and studied at SFS-Qatar during the fall semester of her junior year.

Smith did not set out to become valedictorian, and she said that her academic success was a result of curiosity and a strong work ethic.

“Each class was never really about getting the A ¬— it was about learning as much as I could from the class and putting as much of myself into it [as possible],” Smith said. “There’s a lot more to college than just your GPA.”

In her speech at the Tropaia ceremony today, she will focus on how Georgetown’s Jesuit values set it apart from other universities.

“It was a surprise to me that the Jesuit education would become so important,” Smith said. “The core requirements ended up being really interesting and … sparked my general passion for different things and changed the path that I thought Georgetown was going to take me on.”

After graduation, Smith will likely move to Seattle to look for paralegal work. She aspires one day to work in international law.

Widerlite, originally from Bethesda, Md., majored in English with minors in journalism and psychology and studied in Copenhagen for a semester. A former staff writer for The Hoya, she also is a dancer with the Georgetown University Dance Company, the creative director for Spoon University, a peer advisor for the College and gave summer tours for the Office of Admissions.

“It’s not just about the grades. There’s so much more to Georgetown, so I’m glad I was involved in as many things as possible,” Widerlite said.

Although she was accepted to the Georgetown University Law Center through its early assurance program, Widerlite deferred her offer and instead will work at NBCUniversal’s page program in New York City for a year.

“I worked at ABC News last summer, and I’m more interested in learning about the entertainment side, so that’s why I’m really excited about the page program because you get to learn about all different facets of the industry,” Widerlite said.

Bucula, a government major, worked as a research assistant for the government department, interned for various think tanks in the D.C. area and was involved with D.C. Reads. For a nine-month period, he studied abroad in Tajikistan, where he studied Farsi.

Bucula, like his co-valedictorians in the College, credits his success to a strong work ethic.

“I just worked hard my first semester and got all As and thought, ‘Oh, that’s not that bad,’” Bucula said. “So if you work hard, you get all As.”

He does not yet have plans for after graduation.

Pollmann, originally from Vancouver, Wash., majored in international politics with a concentration in foreign policy. She was involved with Truth and Human Rights in North Korea before spending her junior year at Oxford University. In her senior year, she was involved in the Vietnamese Student Association while simultaneously writing two theses about Japan’s foreign relations.

Despite her devotion to her research, particularly for the Institute for the Study of Diplomacy, Pollmann has always held academics as her priority.

“I was always going to put schoolwork first,” Pollmann said. “Decisions about internships, jobs, club commitments, all of that would come after I knew that I could do the best that I could do in the courses that I chose to make a commitment to.”

After graduation, she will work as a producer at TV Tokyo, a Japanese television network in Foggy Bottom, though she aspires to eventually return to academia.

Meza majored in human science and completed the pre-med track. He studied abroad over a summer in Argentina, performing bedside visits with local patients and lab research with NHS professor Dr. Pablo Irusta. After graduation, Meza will attend the University of Pennsylvania’s Perelman School of Medicine, where he will pursue a combined M.D./Master of Public Health degree.

“Ideally, I can see myself using the masters in public health to do some type of clinical research. For my senior internship this year I did some sports injury prevention research looking at surgery in Major League Baseball pitchers. … I think with the masters in public health, I really want to focus on something that will make an impact on the population,” Meza said.

Fierstein majored in accounting and finance in the MSB. Outside of class, he is involved with Georgetown Collegiate Investors and Sigma Phi Epsilon.

After graduation, Fierstein will begin a full-time position as an analyst at Perella Weinberg Partners, where he had internships the summers after his sophomore and junior years.

“Once I worked there, I liked the culture, and I liked the fact that I could see that I would be getting a lot of responsibility from day one,” Fierstein said.

Correction: A previous version of this article incorrectly stated that Smith studied in Germany during her junior year, when in fact, she spent the spring semester of her sophomore year in Germany.