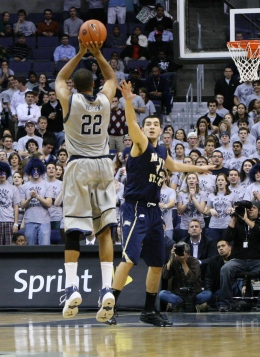 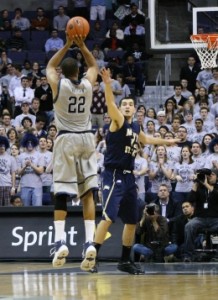 In the back corner of McDonough Gymnasium’s John Thompson Lobby, surrounded by the trophies of past Hoya triumphs, stood Julian Vaughn. Cornered by reporters, the 6-foot-9 junior, his arms behind his back, answered questions about Georgetown’s prospects for the year, his soft-spoken voice barely audible above the general chatter of the event.

Above him, pictures of Patrick Ewing and Alonzo Mourning adorned the wall. Looking at the undersized, unknown and understated forward, it was hard to imagine that he would be the next in the great line of Hoya big men.

“I think we’ve all been getting up a lot of shots in practice and outside of practice. You’re definitely going to see a difference,” Vaughn said that October afternoon, weeks before the Hoyas tipped off against Tulane.

Vaughn’s prediction proved to be a prophecy because in the three-and-a-half months since being cornered by reporters, the junior has claimed a spot in the starting five and is quietly averaging a respectable 8.2 points and 5.3 rebounds on a team dominated by the Big Three of Chris Wright, Austin Freeman and Greg Monroe.

A star at Oak Hill Academy in Mouth of Wilson, Va., Vaughn, who now stands at 6-foot-9, 250 pounds, a full 20 pounds over his lanky frame from his senior year, was known as a shooter as much as a post presence. His Scout.com profile described him as someone with “the ability to play on the perimeter as a face up forward.” On a star-studded squad, which USA Today ranked No. 1 in the nation, he averaged 8.2 points, 10.2 rebounds and four assists per game.

A three-star recruit on Rivals and a four-star by Scout, which ranked him the 14th-best center in the Class of 2007, Vaughn’s college list read like a who’s who of college basketball on the eastern seaboard. Georgetown, NC State, Wake Forest, Georgia Tech, Pittsburgh, Maryland and Florida State all offered scholarships to the Vienna, Va., native, who was named Mr. Basketball for the state of Virginia by the Roanoke Times.

While Vaughn’s DC Assault teammate Austin Freeman, who had committed to Georgetown, tried to convince Vaughn to join him on the Hilltop, Vaughn felt that the best place for him was in Tallahassee, Fla., at Florida State.

“I was recruited and stuff to come here,” Vaughn says.  “Austin and [I] played together in summer ball. He wanted me to come, but it just didn’t work out for me.”

At Florida State, Vaughn became a solid role player for the Seminoles, averaging three points and 2.2 rebounds in 13.3 minutes per game. Vaughn was even named sixth man of the year by Florida State at the end of the year, but after a year in the Sunshine State, he was drawn back to the area where he grew up.

“I wanted to get back to the area, and I wanted to play with Austin again so I decided on Georgetown,” Vaughn says of his decision to transfer to the Hilltop after his freshman season at Florida State.

Granted a waiver by the NCAA, Vaughn was able to forgo a mandatory year on the sidelines, which accompanies most transfers, and got on the court right away for the Hoyas.

In his first year on the Hilltop, Vaughn saw his minutes and his production decrease from his time in Tallahassee. He saw considerable minutes in early-season blowouts, and in a thumping of Connecticut to open Big East play he played 12 minutes and had two points and two rebounds. His minutes continued to fluctuate from game to game, and as the Hoyas’ season unraveled and Head Coach John Thompson III reworked his lineup, Vaughn found himself passed over by other bench players like Omar Wattad and Nikita Mescheriakov.

While Vaughn played in 30 of the Hoyas’ 31 games,  he never played more than a half of basketball, averaging 1.8 points and 1.7 rebounds in 8.8 minutes per game for the Hoyas, who bowed out in the first round of both the Big East tournament and the NIT.

“You know it’s tough,” he says of his decreased production last year. “But you can’t get down. I just worked hard.”

After a disappointing season personally and collectively, Vaughn knew he needed to work hard in the offseason if he ever wanted to have an impact on the court for the Hoyas. The departure of DaJuan Summers to the NBA and Wattad to Tennessee-Chattanooga meant that a spot next to Greg Monroe was there for the taking.

Sophomore Jason Clark says it was less about skills and more about confidence.

“He had a great, great offseason,” Clark says. “Both me and Julian, we both needed to get our confidence coming in from last year, and I think that’s what happened.”

Monroe says that the confidence was born of long hours in the gym.

“He worked extremely hard at the end of last year and this summer, coming into this year,” Monroe says. “He works hard during practice, comes before and stays after, so I mean, it’s definitely paying dividends for him.”

After locking down a starting spot before the Hoyas’ season opener at Tulane, Vaughn began to grow in Thompson’s offense. Seven points, five rebounds and two assists in 24 minutes at Tulane was followed by a disappointing performance against Temple’s frontcourt, when he managed four rebounds and was held scoreless.

A couple of double-digit performances in blowout wins, however, helped Vaughn regain his confidence heading into the Hoyas’ first tests against Butler and Washington.

Against a pesky Butler defense, Vaughn managed four points, five rebounds and three blocks while co-star Monroe went wild for 24 points. It was four days later in Anaheim that Vaughn had his coming out performance.

Against then-No. 17 Washington, Vaughn torched the Husky defense for a team-high 18 points, seven rebounds and an assist. The Huskies, in a damned-if-you-do, damned-if-you-don’t situation of choosing between focusing on either Monroe or Vaughn in the paint, were rolled off the court in a 74-66 victory that was not as close as the score suggested.

“It helped with the experience and being older,” he says. “I definitely feel more comfortable with what I’m supposed to do. We have a lot of chemistry as a team. We’re very unselfish, and we share the ball pretty well. We find who’s hot that night and who’s feeling it, and we keep moving the ball and get open shots.”

Georgetown jumped out to a 15-4 record and a top-10 ranking on the backs of Monroe, Freeman and junior guard Chris Wright, but less conspicuous was the role Vaughn has played in the Hoyas’ success this season. Vaughn is now satisfied to remain near the lane after changing his game from high school, when he used to roam around the court. Adding an inside presence for the Hoyas that was not always evident with the perimeter-oriented Summers playing alongside Monroe, Vaughn has made defenses decide whether they want to focus on Monroe in the paint or play straight up and respect both Hoya bigs.

No game demonstrated that reality better than Georgetown’s pseudo-upset of then-No. 9 Pittsburgh. Against a tough Panther frontline, Vaughn dished out six assists to go with his 11 points and five rebounds.

Holding a precarious 63-58 lead, Monroe had the ball in the paint when he was met by two Panther defenders. Giving a head fake, Monroe went up and dished to Vaughn, who was standing on the left block, for an easy jam and foul, which he converted to give the Hoyas a commanding eight-point advantage.

“Definitely, it’s always good to have another big man that people have to give a lot of attention to,” Monroe says. “It opens it up for me because you can’t double team, because we have someone else who can score too. He definitely opens a lot up for me.”

Vaughn caught some of his teammates by surprise with his Monroe-like passing ability in the post, which garnered comparison to Steve Nash from one reporter.

“[No], I didn’t know that [he was a great passer], but he’s been putting that on display,” Clark says.

Freeman wasn’t surprised at all

Freeman also said Vaughn’s mindset has helped him this year.

“This year he’s keeping an open mind and just playing basketball,” he says. “I’m happy that he’s playing real well right now. It’s too good to have him down there [on the block]. It’s good to have him and Greg down there getting rebounds and making it harder for the opposing team to get an easy bucket.”

As his play has improved, Vaughn has also become something of a mentor to the younger Hoyas.

“Yeah, he shows [the younger guys] stuff,” freshman forward Jerrelle Benimon said. “He showed me how to be tough, obviously. He’s been in the ACC and the Big East so he definitely knows how everything works.”

Amid a brutal stretch that features games against four top-10 teams in 13 days, Vaughn says it’s important to remain focused.

“The Big East, I think, is the toughest [conference] in the country right now,” he says. “Especially playing on the road in hostile environments every day, there’s not a lot of time to prepare for teams, like two days, or one day [last week] to prepare for Syracuse. So we have to be really strong mentally, stay focused and come to play hard.”

Monroe is happy to have Vaughn’s offensive presence, and Clark is impressed with his passing, but Thompson thinks it’s the little things that have made the difference for Vaughn and the Hoyas this year.

“His effort and his unselfishness [have been important]. He’s been very unselfish about his game, about his willingness to give up his body,” Thompson says. “There have been countless rebounds this year where he hasn’t necessarily gotten the rebound. He goes flying in there, and you see arms and elbows and he gets a finger tip on it and someone else comes up with it. I just think that’s a sign of how willing he is, how unselfish he is, and how committed he is to this team.”

The Hoyas are going to need that effort going forward if they want to beat Duke on Saturday and come out of the second half of the Big East schedule in one piece. Vaughn believes the Hoyas’ mindset and chemistry are what separates this year from last year.

“We’re definitely a lot more mentally strong,” he says. “We believe in each other a lot more than we did last year.”

No longer the shy, unknown forward of last October, Vaughn has given his teammates reason to believe with his performance. Perhaps one day, that hardware in the lobby will be his, and his image will be emblazoned on the wall along with the other great Hoya big men. “