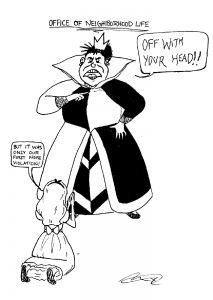 Students who live off campus have had enough. Enough of Student Neighborhood Assistance Program intervention in the smallest of social gatherings. Enough of draconian responses to open trash can lids. Enough of arbitrary punishments often compounded by so-called “tone policing.” Although part of an off-campus community, students are not held to the same standard of conduct as their neighbors and receive excessive punishment for their offenses. The Office of Neighborhood Life must consider the agency of its citation policies and reorient them so that they are truly in the best interest of students, neighbors and the administration.

Under the guise of protecting students from getting a 61D noise citation — an offense qualified as a misdemeanor — from the Metropolitan Police Department, SNAP has sought to rein in revelry in the neighborhoods surrounding campus. For many students, it appears this enforcement is undertaken with little to no effort toward a standardized process of adjudication. SNAP’s overarching guidelines are purposely vague, which lead to ad hoc distinctions between which offenses constitute mere warnings and which warrant a formal write-up.

Considering that the name of the organization is the Student Neighborhood Assistance Program, the ONL needs to recognize that these often unfair policies have eroded the little trust students have in reporting off-campus incidents.

Administrators in the ONL have fostered an inhospitable climate for students living off campus through a deliberate yet simultaneously arbitrary policy of student conduct sanctioning. The ONL shies away from proportional punishment and due process. Trash violations — such as a mild overflow from the trash lid — can result in more severe consequences than hosting a wild night of bacchanalia in the thick of Burleith. Washington, D.C., regulation states that trash can lids cannot be angled more than 45 degrees, so the ONL must conform to this criterion if it seeks to standardize its regulations and criteria for doling out citations.

Moreover, these trash sanctions — often hours of supervised work in university programs, offices, buildings, residence halls or off-campus programs — many times come without warning. If harsh repercussions for minor violations are the norm, the office that administers them should listen to student appeals with the understanding that citations often have arbitrary rationales.

While the objective of the ONL is to mediate conflict so that students are not exposed to the full punitive force “real people” suffer from, the administration must standardize how punishment is meted. Minor violations must incur proportionate penalties. To further rebuild the trust between students and the ONL, SNAP must reconsider its noise violation policies. SNAP could instead establish a 10-minute grace period to give students time to cut down on noise before giving a citation. This recommendation, while taking away the “bite” of SNAP, mitigates the arbitrary nature of the everyday cases SNAP encounters while rebuilding student trust.

The ONL must become a facilitator for better neighbor-student relations instead of a vehicle of punishment. In this way, the Georgetown Community Partnership or even the ONL could promote more events that cater to both student and neighbor interests, such as neighborhood-student potluck get-to-know-you dinners, community service volunteering programs or community-fostering group events in the fall at Volta Park. These events would be a strong step in the campaign to show neighbors that students are not menaces, but rather regular young adults who have respect for their community. They would also show students that neighbors are not curmudgeons, but normal people with interesting histories and families to raise. In this way, the ONL can serve as a much better conduit for understanding between neighbor, administrator and student.

So far, the ONL has not treated students living off campus with respect or given them a fair stake in their community. Building a better community grounded in genuine respect, trust and understanding is the best way for these groups to coexist on this Hilltop we call home.