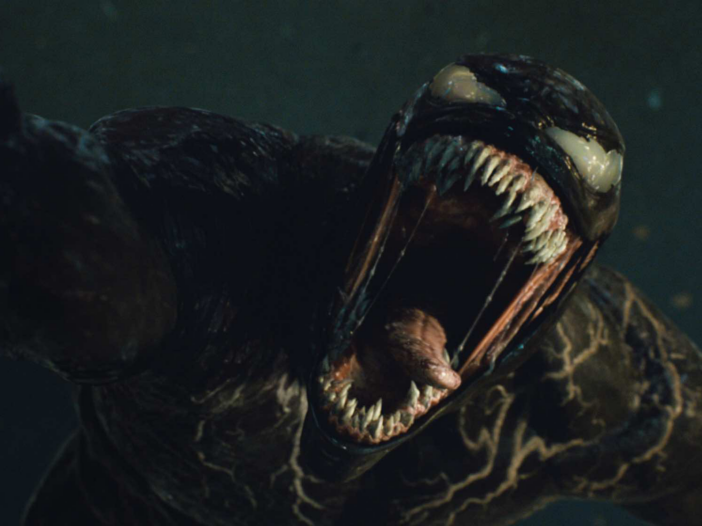 The slimy, wisecracking, extraterrestrial symbiote that came to theaters in 2018 returned Oct. 1 with similarly mixed results.

The titular inky beast, Venom, wormed his way into audiences’ hearts three years ago in “Venom,” now followed by Columbia Pictures’ 2021 sequel “Venom: Let There Be Carnage.” The new film gives fans of the original everything they want — 97 minutes of a thinly scripted, humor-infused, substance-devoid plot that whirls around a predictable rivalry between two CGI monsters.

Directed by prolific motion capture actor Andy Serkis, “Venom: Let There Be Carnage” is a superhero action-comedy that sees Tom Hardy reprising his dual role as the scruffy journalist Eddie Brock and the voice of Venom, a volatile alien who inhabits Eddie’s body. The pair brawl and bicker like a married couple as they are drawn into the unhinged world of psychotic serial killer Cletus Kasady (Woody Harrelson).

After Eddie’s interview with an imprisoned Kasady goes awry, the serial killer bonds with another bloodthirsty symbiote whose power rivals Venom’s, called Carnage. With San Francisco now under attack, Eddie and Venom must overcome their differences to defeat this murderous monster known as Carnage.

To Serkis’s credit, “Let There Be Carnage” is a film that understands its own ludicrous essence. The movie wastes no time with exposition by assuming that its audience is acquainted with the antagonistic chemistry of its main characters, launching straight into its central plotline of battling CGI monsters. The film seems to relish its own lunacy, as Serkis piles fantastical imagery and laugh-a-minute gags, like Kasady biting part of Eddie’s hand, upon each other, milking the movie’s brief runtime for all its worth in terms of cheap lines and fight scenes.

But there remains one inevitable truth at the heart of this absurd film — if audience members were to critically analyze “Let There Be Carnage” for just a second, they would realize that, when held to any reasonable standard of filmmaking, this movie fails in almost every single way.

“Let There Be Carnage” is an absolute mess, and the central plot is frustratingly predictable and adds little to the canon of the Venom universe. The script, while displaying marginal improvement compared to its 2018 predecessor, fails to flesh out most supporting characters and undercuts the film’s few emotional moments with campy jokes.

The cinematography is generally weak, as it foolishly resorts to replicating its predecessor’s propensity for poorly-lighted shots and a murky, dull aesthetic, reminiscent of 2016’s “Batman V Superman: Dawn of Justice.” The film’s final act, though it displays an agreeably thrilling CGI-driven battle, resorts to a dated damsel-in-distress format that exemplifies the film’s lack of originality and taste.

A lot of the film’s problems also come from the mishandling of its central villain. Though Woody Harrelson manages to imbue Cletus Kasady with a reasonably menacing screen presence, Kasady is so poorly written that even the undeniably talented Harrelson cannot fully compensate for the lack of character substance. As a whole, the character of Carnage, the symbiote that bonds with Kasady, is a disappointment. The red monster, while intimidating in appearance, is ultimately a one-dimensional antagonist devoid of any motivation beyond wanton destruction.

The film is not entirely without merit, however, as the pugnacious chemistry between Eddie and Venom gives this otherwise disastrous piece of cinema an action-comedy aspect that relies on the odd dynamic of its central characters. Hardy, in fact, delivers a deliciously over-the-top performance, executing his lines with erratic, vein-popping enthusiasm.

Regardless, there is little to celebrate in “Venom: Let There Be Carnage,” and though many might characterize the film as innocuous, dumb fun — the movie is, in a way, quite dangerous for cinema.

“Let There Be Carnage” made more money in its opening weekend than any other film released during the pandemic besides the latest James Bond installment, “No Time To Die,” and it boasts a laudable audience score of 84% on Rotten Tomatoes. As this film and others like it continue to produce such large sums of money, more serious and well-made dramas may lose the ability to obtain widescreen releases.

If films like “Venom: Let There Be Carnage” have their way, cinema will become a strictly absurdist affair.