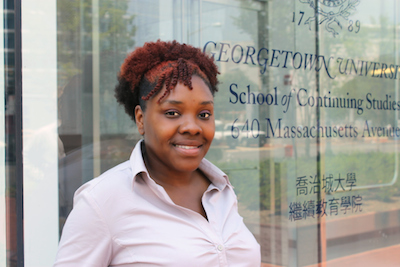 After the university officially partnered with the Pat Tillman Foundation in May, two graduate students, Wayne Johnson (GRD ’15) and Bonnie Hayes (GRD ’15) were among the 2014 scholar class.

The scholarship fund, which was created after the death of NFL player and veteran Pat Tillman, supports the education of around 60 students from the military each year. This year, the foundation selected 59 students out of more than 7,500 applicants.

Johnson is currently studying international development in the School of Foreign Service’s master’s program. When on active duty in the military, Johnson, 29, led a counter-improvised explosive device assignment in Afghanistan, spent two years at an army research lab and became an active commander for a parachuting unit.

“I was happiest when I was doing the bomb work because I felt like I was helping people. When I was doing disaster work, that was also a good cause,” Johnson said. “I learned about myself that it’s important to me that I’m engaged in the group cause and helping others.”

When he finished his service, Johnson decided to apply to Georgetown for a variety of reasons including its good reputation, excellent professors, religious affiliation and access to internships.

Johnson credits Elizabeth Ferris’ INAF-698 class “Introduction to Humanitarian Crises” as instrumental to his career path. The class covered different types of aid and how they are delivered across the world.

“The world of humanitarian organizations is an imperfect one, but I think — I hope — that students came away from the course realizing that humanitarian response is constantly evolving in the search for more effective response to people whose lives have been shattered by war or disasters,” Ferris wrote in an email to The Hoya. “The big weakness is the seeming inability of the international system to prevent conflicts in the first place and to devote the necessary attention to post-conflict, post-disaster reconstruction when the television cameras have moved on.”

According to Ferris, Johnson seemed to be extremely engaged in the issues discussed in class.

“He was an enthusiastic and interested student, he asked lots of questions about the reading and class presentations,” Ferris wrote. “I think he was moved by some of the situations we covered and came away with both a better understanding of how the system works — and hopefully many more questions.”

Hayes, 32, the other recipient of the scholarship, is studying in the Sports Industry Management Program at the School of Continuing Studies. Hayes served on the Air Force for seven years, including a stint as a mental health technician in Kuwait. She helped soldiers involved in IED attacks, an experience which propelled her interest in helping war amputees. Currently, Hayes works at Walter Reed National Military Medical Center.

“The degree is going to help me do one of my dreams, my biggest dream, which is to have my own sporting complex geared toward war amputees,” Hayes said.

Hayes said she chose Georgetown because she knew it would provide her with knowledge to help her achieve her dream.

“At the time, Georgetown was ranked sixth in the nation or in the world,” Hayes said. “It’s awesome because it’s close to me and I wanted to go someplace that had a whole bunch of instructors who were already in the industry who I could learn from.”

Hayes said that one particular professor, Bobby Goldwater, provided useful advice for her future. Goldwater said that he enjoys Hayes’s ability to work effectively in groups.

“Bonnie is a very thoughtful individual,” Goldwater said. “In especially her group projects, she was certainly a valued contributor. She works very well in a team environment. She was very thoughtful in all of her contributions throughout the semesters.”