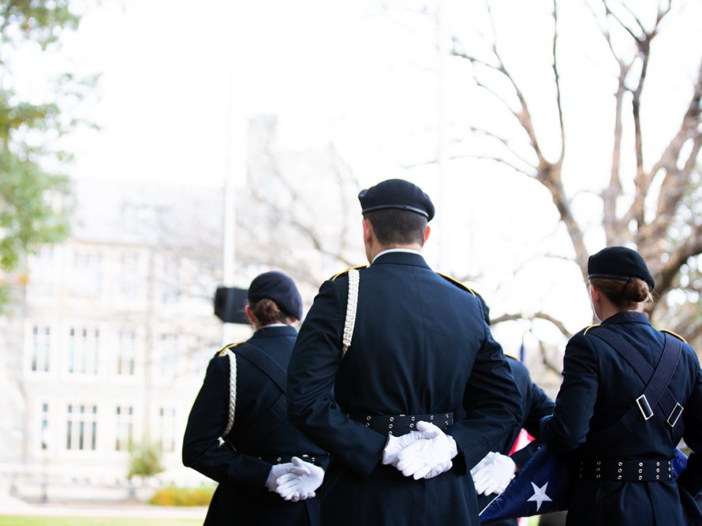 At the ceremony, DeGioia shared his gratitude to different organizations that aim to support the Georgetown veteran community, including the Veterans Office and GUSVA. DeGioia commended the veterans and active-duty members of the Georgetown community for the lasting impact of their service.

“Your integrity, respect, imagination, passion, service, resilience, the discipline and hard work that so many of you have demonstrated by returning to school after military service, even balancing the demands of both school and active-duty service, shows great sacrifice, strength of character and depth of leadership,” DeGioia said.

The Georgetown community invests in veterans’ programs and education on campus through career counseling and financial support, allowing veterans in the community to meet their academic needs and maximize their possibilities, according to Howe.

“Thank you for not only being here today to honor our veterans but, more importantly, thank you for your cura personalis for our veterans,” Howe said. “For ensuring that Georgetown sees the gifts and challenges, needs and possibilities, of the men and women who once wore our nation’s cloth.”

In his speech, Howe emphasized the existence of many active-duty military students, student veterans and military families at Georgetown and acknowledged Brown’s leadership on campus and commitment to supporting veterans.

The ceremony began with a posting of the colors by Georgetown’s ROTC Color Guard, followed by a performance of the national anthem sung by the Georgetown Chimes, the university’s oldest all-male a capella group.

Following their speeches, Brown and DeGioia presented Howe with the flag that had flown on the flagpole on Copley Lawn since last year’s Veterans Day ceremony, as per GUSVA’s tradition of gifting the flag to each year’s keynote speaker.

“The flag that President DeGioia and I just presented to Colonel Howe spent the last year flying across the Georgetown campus, and it represents the passing of all cumulative knowledge gained by veterans on these grounds this year,” Brown said.

The Hoya Battalion, a group of student cadets from five different Washington, D.C.-area universities, proceeded to raise a new flag, which hit the top of the post just as the Healy Hall bells rang out.

Just after the flag was raised, Javon Price (SFS ’21), reserver at Joint Base Andrews, cadet and Air Force ROTC member, stood up and sang the lyrics of the Armed Forces Medley with pride. Many veterans and other audience members began to follow in his example, standing and singing when their respective army division’s song began to play.

Singing during the medley honored the three core values of the Air Force: integrity, service to others and excellence, according to Price.

“Part of it was intuition, and part of it was pride,” Price said in an interview with The Hoya. “I’m proud to serve, and the very least I could do was sing the song. I thought it was a cool way to embody all three core values that we have in the Air Force.”

Following the ceremony, DeGioia hosted a reception in Riggs Library for veterans, the Veterans Office workers, staff, students and faculty, many of whom shared stories of their own service and the service of others.

The Veterans Day celebration is just one of the many activities the Veterans Office is organizing for this November’s Military-Connected Awareness Month. The office will also host events such as a “Veterans in Government” panel Nov. 14, the U.S. Department of Veterans Affairs’ GI Bill School Tour on Nov. 15, the Ruggles Lecture in Military Medicine on Nov. 18 and the VET Ally 2.0: Addressing the Veteran Identity event Nov. 19.

Veterans Day observances should be primarily celebrating the contributions of current, past and future service members, according to Alazar Zewoldi, Veterans of American University club president, who was in the U.S. Army from 2014 to 2018.

“Lots of people try to make Veterans Day solemn,” Zewoldi said in an interview with The Hoya. “Really, it should be a celebration of service for those serving, those who have served and those who will serve.”