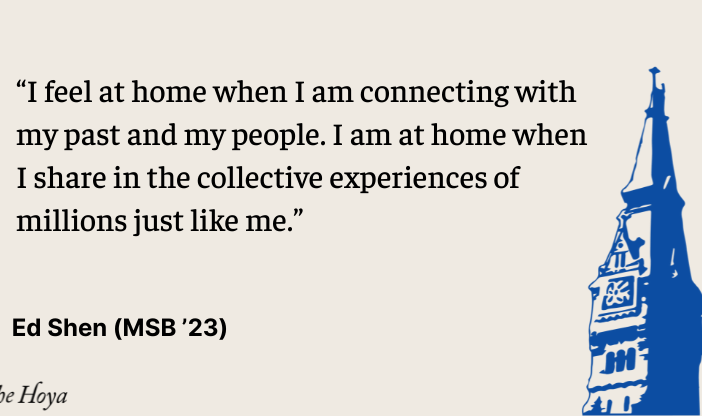 I came to America at a young age, and it’s where I was raised. The rolling hills of the Great Plains are where I called home. Home is dancing through golden fields of wheat and running along lovely little streams and creeks. It’s a walk by the river and driving up and down the long straight roads that cut through the vast prairies like lines on a chessboard. But when I walk through the streets of New York City’s Chinatown and Flushing neighborhoods, seeing the roasted ducks hanging in the windows and hearing the chatter of Mandarin all around tugs at something within me.

I made a special effort to get a haircut in Chinatown this summer. Walking the crowded streets on the way to the barbershop evoked feelings of nostalgia and homesickness like no other. Reading posters and signs in Mandarin, seeing laundry hanging out of windows and making conversation with the aunties and the hawkers, I couldn’t help but feel something stirring within my bones.

My parents grew up in China: my father in the bustling city of Shanghai and my mother in the countryside. I was born in Shanghai, but I have only seen it a few times on family vacations. Whenever I visited, it felt foreign, like any other vacation destination. It didn’t feel like home. I understood Mandarin and even the Shanghai dialect. I looked the part and acted it too, but I never felt that natal attraction I expected to feel. How could the hustle and bustle of a metropolitan supercity in China be my home, when all I had known were the rural farmlands of America?

My father would tell stories of times past. He would take the ferry and walk the noisy bustling streets of Pudong, Shanghai, on his way to school. On the road home, he would buy a snack from the same food cart every day. He spoke of playing games like jianzi in the schoolyard with friends and sauntering around the Waitan, a waterfront district, at night. As he spoke, I would listen intently, nodding along, yearning to understand his experience. His face would glow and his eyes would gaze off into the distance as his mind brought him back to a different realm. Charmed by memories of a different time, he seemed so far away, in a world that I had never known.

I experience Shanghai through memories, pictures, videos and FaceTimes with my grandma. The buildings scrape the floors of heaven and the crowds flow like waves in the ocean. The bustle of passersby talking and walking and vehicles honking and crawling along consume my senses. Aromas and flavors of street food float through the air and draw your attention. The resplendent displays and neon lights that light up busy avenues entice you in, begging you to join the crowds.

What home means to me has shifted; home is not only an address or a building. Home is a feeling, a comforting touch and a familiar scent. The sense of peace and belonging at home rests deeper in the soul than any other emotion. I feel at home when I am connecting with my past and my people. I am at home when I share in the collective experiences of millions of those just like me.

I still FaceTime my grandma sometimes. My grandma has spent her whole life in Shanghai. She almost exclusively speaks the Shanghai dialect, a dialect so different from Mandarin that it sounds like a different language. I can understand her but can only respond with broken sentences. Now I am learning to speak the dialect to communicate with her in our native tongue. Through learning this language, I am piecing together the fragments of a different life, one of a seamstress’s grandson who walked home to Pudong every day — one of someone I could have been.

There is a city in my bones, a culture that I belong to that I am just now embracing. It feels like home.

Ed Shen is a junior in the McDonough School of Business.