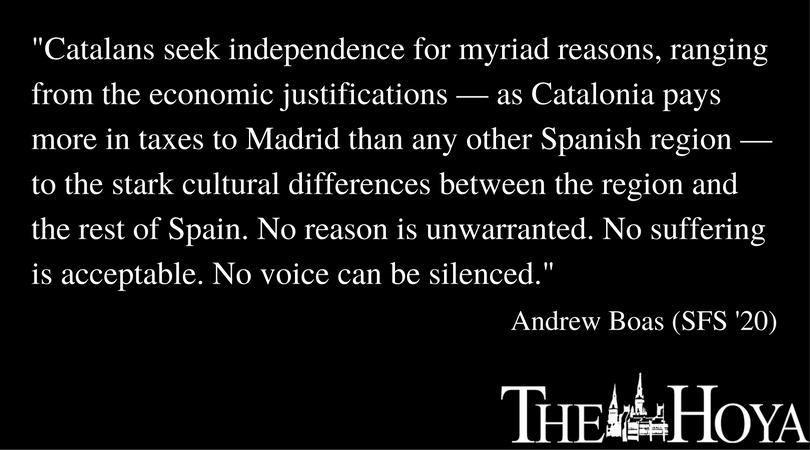 The distinction here is negligible in practice but essential in theory. I believe that Catalans, citizens of the autonomous community of Catalonia in Spain, deserve the right to determine their own future, and most importantly, to decide whether that future rests in or outside Spain.

On Oct. 1, I found myself watching in horror an ocean away as Catalans were physically assaulted by the Spanish Civil Guard while trying to vote in an independence referendum that had been deemed illegal by the Spanish Central government.

On Oct. 1, Catalans voted in a landslide to leave Spain and become an independent state. Of the more than 2.2 million Catalans who voted, nearly 90 percent backed independence, according to the BBC. The country, the European Union and the United Nations cannot ignore the cries of Catalonia any longer.

I was horrified, but not surprised. Spain’s history of oppression in Catalonia extends back more than 300 years; unfortunately, after centuries of political and cultural suppression, Catalans are accustomed to far worse than injuries at the hands of a militarized police force sent from Madrid.

My belief in the importance of a people’s self-determination is a part of my identity as a Jewish man and a Zionist.

The empathy I hold for the Catalan people is in many ways selfish, partly a byproduct of my appreciation for the Catalan language and culture but above all a manifestation of my Zionism.

If I support the Jewish people’s right to exist freely and independently in our homeland, how can I deny this same destiny, one that I hold as an inalienable right, to Catalans?

I am not Catalan, nor am I Spanish. My opinion on self-determination may be valid, but my views on independence in this case are at best irrelevant, if not entirely uncalled for. I am still unsure how I personally would have voted in the recently held independence referendum, and yet that decision is inconsequential.

I am speaking out in strong support of Catalonia’s right to build the future it chooses. I have no right to judge what that future should look like.

I recognize that the Catalan people, time and time again, have advocated for independence. They have expressed their longing for a Catalan Republic through polls and peaceful protests. Their resolve to make their voices heard, despite the threat of violence by a state that violates their rights with rubber bullets, batons and tear gas, is admirable. Catalans are proud Europeans in an age of Euroskepticism, multilinguals in a time of closed-mindedness and fierce supporters of liberal social values when they are being bombarded around the world by authoritarianism.

I am distraught to witness the suffering of innocent people. Catalans seek independence for myriad reasons, ranging from the economic justifications — as Catalonia pays more in taxes to Madrid than any other Spanish region — to the stark cultural differences between the region and the rest of Spain. No reason is unwarranted. No suffering is acceptable. No voice should be silenced.

My personal investment in Catalonia comes in part from my friendships with Catalans, of course, but it comes more prominently from an empathetic sense of similar history and shared destiny.

Both Catalans and Jews have unduly suffered for centuries at the hands of powers that have censored, persecuted and oppressed them.

Both have been contradictorily forced to assimilate while being vilified for assimilating too well. Both have been accused of being too successful, having too much power and controlling the economy, all the while being treated as second-class citizens — as was the case for Jews throughout not only medieval history, but also during the events preceding World War II and in countless other incidents. Both have been made to part from their ancestral tongue, abandon their heritage and doubt the legitimacy of their dream to live freely in their homeland.

Today, Israel exists as a testament to the Jewish people’s triumph over this system of oppression. I hope that one day Catalans are also able to experience this freedom on a path they have chosen for themselves.

Andrew Boas is a sophomore in the School of Foreign Service.