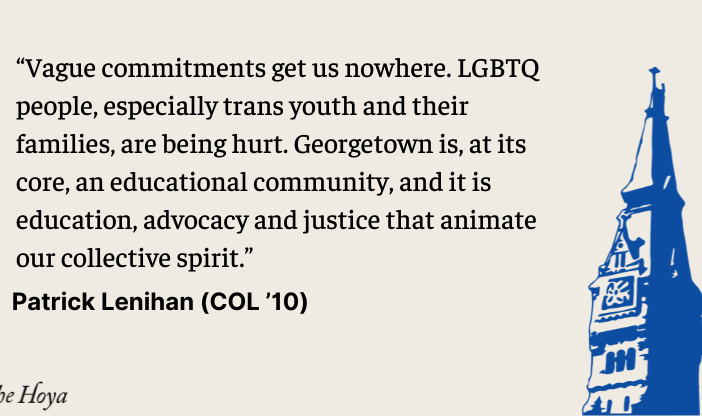 Georgetown has a decent track record of supporting LGBTQ people, which makes sense. Supporting the LGBTQ community, and understanding and advocating for LGBTQ people, is in keeping with the university’s mission to educate reflective lifelong learners who are responsible, active participants in civic life and who live generously in service of others.

That’s why the decision by the Georgetown University Alumni Association (GUAA) to host its marquee biannual event in the midst of a battlefield for LGBTQ rights without helping attendees understand that battle is perplexing. In doing so, GUAA fails to uphold the key tenets of the university’s mission and instead gives tacit approval to state cruelty toward LGBTQ people and their families.

In May 2021, GUAA announced it would host John Carroll Weekend in Nashville, Tennessee, from March 31 to April 3 of 2022, which is this weekend. John Carroll Weekend is meant to reconnect graduates from all over the world with the spirit of the university. Typically, the event includes academic programing, entertainment and an awards ceremony. This year’s honorees include Speaker Nancy Pelosi, among many others, who will be recognized for her contributions as a friend and ally of the Georgetown community.

LGBTQ people face significant persecution and violence around the world, including here in the United States, in spite of significant progress made for LGBTQ rights in recent decades. Over the past year, an unprecedented number of anti-LGBTQ bills have begun making their way through state legislatures around the country. It’s no wonder LGBTQ youth in the U.S. are four times more likely to attempt suicide than their peers.

I am a proudly out gay man, my family members are strong allies, and we are all Hoyas. We emailed University President John J. DeGioia (CAS ’79, GRD ’95) in June 2021 about these disturbing initiatives in Tennessee and our concern over holding John Carroll Weekend there. While we initially suggested relocating the event to somewhere with a less homophobic state legislature, we later asked university and GUAA leadership, in the spirit of constructive engagement, if they would host a panel or discussion on the role of state governments in contemporary politics.

We thought this was a balanced way to address admittedly polarizing issues without taking too aggressive a position, allowing Georgetown to foster dialogue and understanding about these troubling laws without actively alienating any parties.

After months of conversations, and commitments from university and GUAA leadership to host substantive programming every day of John Carroll Weekend, the agenda that GUAA initially published included not a single LGBTQ-related event, and no mention of state level politics.

In private correspondence with my family, a member of the university leadership stated that after deliberations, the university and GUAA leadership did not believe a panel or discussion-based program would be successful for countering the anti-LGBTQ political environment because of limited attendance and low registration for similar programs in the past.

GUAA’s solution was to host an “especially visible” reception to “celebrate” Georgetown’s LGBTQ and allied communities. The reception, included in a subsequent iteration of the event’s agenda, is set to include remarks of an undefined nature. There is no certainty Tennessee’s anti-LGBTQ laws will be addressed. And while GUAA has published a statement regarding anti-trans laws in Tennessee, the statement does not mention the broader assault on LGBTQ rights in Tennessee and makes only vague commitments.

Vague commitments get us nowhere. LGBTQ people, especially trans youth and their families, are being hurt. Georgetown is, at its core, an educational community, and it is education, advocacy and justice that animate our collective spirit. This year’s John Carroll Weekend reflects none of that.

There is absolutely no time to wait. GUAA must address LGBTQ issues at every event of this year’s John Carroll Weekend, and the association must commit to doing more going forward. That is the only way to uphold Georgetown’s mission and actively live the university’s values. We owe it to ourselves, and to all LGBTQ people.

Patrick Lenihan is the Vice President of Communications for Grindr. He graduated from Georgetown College in 2010.