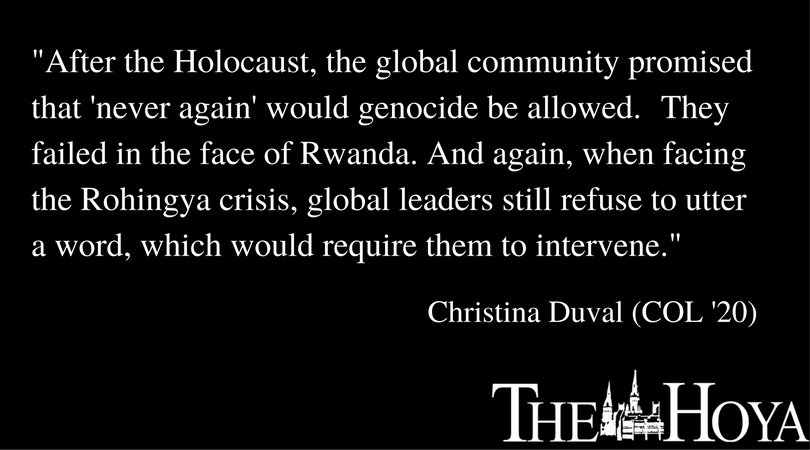 As the Rohingya crisis in Myanmar rages on, many in the international community have highlighted the inadequate response of Aung San Suu Kyi, Myanmar’s state counsellor — a position akin to prime minister —  and international symbol of human rights. Yet, the apathy of the global community in actually addressing the crisis is the real failure.

If the international community continues to fail to intervene in the Rohingya genocide, its critiques of Suu Kyi ring especially hollow.

Discrimination against the Rohingya — a predominantly Muslim minority group in Myanmar — is not a new phenomenon. In the last several months, however, persecution has dramatically intensified, leading to a massive refugee crisis in which nearly half a million Rohingya have fled from Myanmar to neighboring Bangladesh, according to National Geographic.

The crisis did not emerge from thin air. From 1962 to 2015, Myanmar was led by a brutal military dictatorship. Turmoil roiled the country as the government warred with ethnic minorities. Protesters — including Buddhist monks — were killed in the street, and political dissidents were held in minute jail cells. Conflict and violence are hardly new to Myanmar.

What is new is Western attention. This August, following a mass exodus of Rohingya refugees to Bangladesh, Western news outlets jumped on the tragedy. Soon, articles about it were everywhere.

Even as media outlets have cried out about the crisis, the reactions by international governments has been nearly nonexistent. This international apathy shows the hypocrisy of criticisms of Suu Kyi’s relative silence. International outrage should be directed at the continuing crisis, rather than at the actions of Suu Kyi.

Suu Kyi now holds a place of power in Myanmar as the de facto leader: A clause in the constitution of Myanmar prevents those whose spouses or children are foreign citizens from becoming president; as such, she cannot ascend to the office.

Yet, Suu Kyi has been remarkably quiet on the violence inflicted upon the Rohingya. Praise has turned into criticism as many leaders and human rights activists call on Suu Kyi to condemn the violence and military actions. The West has now soured on its darling, to such a degree that some have called for the revocation of her Nobel Peace Prize.

Suu Kyi will not lose her Nobel Prize, as many have demanded — nor should she: Despite the errors of her current action, they do not invalidate the amazing work she has done for her country.

For years, Suu Kyi was the light that led and inspired her people to push for a democracy. Few people in the world, including past Nobel Peace Prize winners, are perfect. Even Mother Teresa — who won the Nobel Peace Prize in 1979 — had her flaws; she condemned all those who sought abortions. Though we critique Suu Kyi’s inaction, we should maintain respect for her past.

Moreover, it is important to note that Suu Kyi has virtually no power over the military in Myanmar. The military holds 25 percent of seats in the Burmese legislative assembly and retains strong control over the country. As the violence towards the Rohingya is largely perpetuated by the military, it is unclear whether Suu Kyi could make a significant difference.

While the idealist in me wishes my former idol would live up to her past as a symbol of human rights advocacy, the realist in me acknowledges why such action would be difficult.

Throughout this discussion, the international community’s involvement in the Rohingya crisis continues to be minimal.

After the Holocaust, the global community promised that “never again” would genocide be allowed. It failed in Rwanda, Armenia and Bosnia. Yet again, when addressing the Rohingya crisis, global leaders refuse to utter that word, which would require them to intervene under United Nations doctrine.

As Western leaders and citizens fret about Suu Kyi’s failings, thousands of Rohingya still toil in destitute refugee camps in Bangladesh. While the world calls on Suu Kyi to step up in the face of this ethnic cleansing, the true failing is that of the global community’s inaction.

Christina Duval is a sophomore in the College. She is the academic programming coordinator of No Lost Generation, a group dedicated to refugee advocacy.