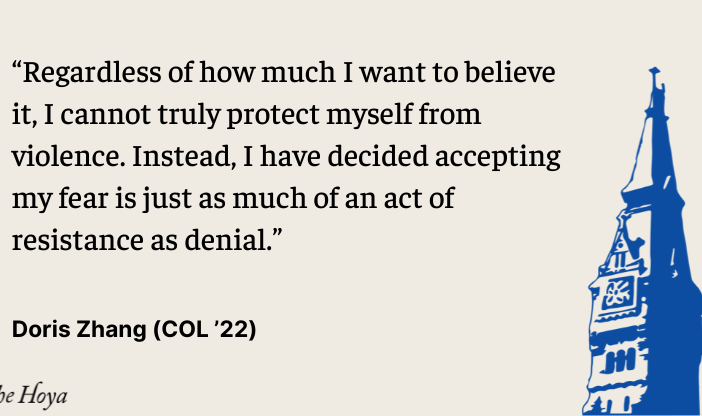 CW: This article directly references racism and anti-Asian violence. Please refer to the end of the article for on- and off-campus resources.

“We all deserve to be safe,” author Nicole Chung affirmed after yet another Asian woman was recently murdered — Christina Yuna Lee was stabbed over 40 times after being followed into her New York City apartment.

I no longer refer to these brutal incidents as part of a wave of anti-Asian violence in the United States. The violence is not a wave. Rather, it has become a new reality since the beginning of the COVID-19 pandemic, with only a few fatal incidents making their way into mainstream American consciousness.

I know Chung is right — my Asianness and my womanhood should not diminish my right to safety. I also know that walking outside, especially alone at night, I cannot assume I have the safety I deserve. I can only hope that if I project enough confidence, enough “don’t fuck with me” attitude, and stand tall at my 5’10” stature, my efforts might deter other people from attempting violence.

But I know regardless of what I do, my face, my skin and my body make me a target. Regardless of how much I want to believe it, I cannot truly protect myself from violence. Instead, I have decided accepting my fear is just as much of an act of resistance as denial.

Nearly a year ago, when a white man in Atlanta shot and killed eight people, six of whom were Asian women, my body forced me to feel a fear that I had refused to internalize despite the already prevalent anti-Asian hate crimes during the pandemic. I was never naive that the scapegoating of Asian people led to violence — I had seen elders harassed and attacked on the street, and others being told to go back to their country. However, I had tried, and often succeeded, in not perceiving those racist attacks as a threat to my personal safety.

The Atlanta shooting was different. Maybe different because so many people were killed; maybe because the attack happened indoors, meaning nowhere was safe; maybe because once again my parents, who live an ocean away, were telling me to be extra, extra careful walking on the streets. For the first time in a long time, my brain was unable to tame my body’s visceral feeling of fear. When I walked on the streets of Rosslyn in the days following the shooting, my body told me to walk a little faster, look around more, project as much strength as I can.

In a twisted way, though, I also felt lucky that I was not accustomed to experiencing such acute fear before that moment. As an Asian woman, I have been luckier than many: I have not been harassed, save a few catcalls, I have never been told to “go back to my country” and I have never encountered physical violence. Having had this luck also meant I was unsure how to deal with the newfound fear I felt in my body — unlike before, I was no longer able to lie to myself that there was nothing for me to be afraid of.

I hated that I felt so helpless in the face of fear. Somehow, it felt like my fear meant the racists had won. I did not want the perpetrators of hate to have the power to make me feel unsafe in my own body.

In the months since the Atlanta shooting, I have felt varying degrees of safety. Walking alone, at night, it still feels like someone might come out of nowhere to hurt me. I am still an Asian woman and anti-Asian hate crimes have continued; not much has changed.

But now, instead of seeing fear as a relinquishing of power, I now see my fear as a reminder of the safety I and other Asian people in this country deserve. I no longer stay silent about my fear, hoping a projection of strength will ward off the racists. Instead, I write about my fear here, as a reminder both to myself and the world that we all deserve to be safe.

Doris Zhang is a senior in the College. Full disclosure: Zhang previously served as The Hoya’s F’21 Engagement Chair.