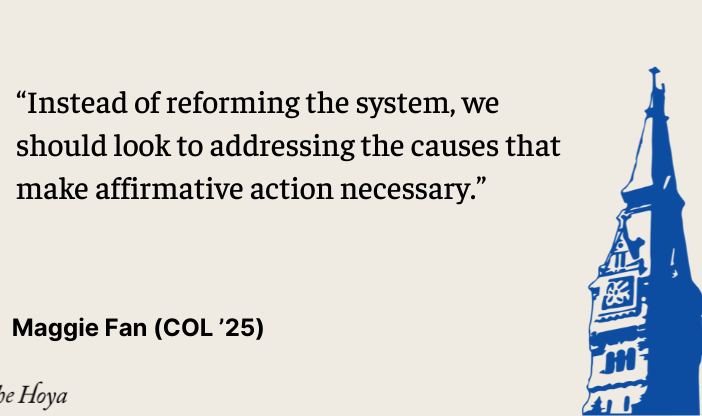 Can a system built by oppressors really benefit the oppressed? Affirmative action is a set of policies within any organization that seeks to include underrepresented people and prevents discrimination against minority groups. Modern-day affirmative action policies, however, perpetuate a racial hierarchy that excludes the exact group of people the policies were designed to include.

The phrase, affirmative action, was first explicitly used in 1961 in President John F. Kennedy’s Executive Order 10925. The order attempted to improve the hiring practices of government contractors, stating, “the contractor will take affirmative action to ensure that applicants are employed, and that employees are treated during employment, without regard to their race, creed, color, or national origin.” Today, these policies have transcended above the workplace sphere and into university educational policies. Many universities have adopted affirmative action policies to recruit students from marginalized backgrounds.

Several white students have challenged these policies. In 2016, a white woman named Abigail Fisher sued the University of Texas at Austin after admissions officers denied her application. Fisher claimed that applicants of color who were less qualified than she had stolen her spot. The court eventually ruled in UT Austin’s favor, stating that the university’s policies were constitutional. Lawsuits like these have become increasingly commonplace — unsurprisingly, most of them are filed by white women.

I admit that affirmative action has its downfalls. Growing up with the model minority myth hovering over my head, I always knew that I was held to a higher standard than the average student. Stereotypes and societal pressures expected me to perform at a higher level solely because Asian people are unnecessarily grouped under a monolithic label.

However, statistics have shown that its policies have had a noticeable effect. Today, more than half the workforce consists of minorities, women and immigrants.

Though the system assuredly has its downfalls, affirmative action policies are still necessary. So, maybe abolition isn’t the right cause to head. Perhaps, all we need are some provisions. Provisions targeting inferior schooling and improving social and educational inequalities may provide marginalized communities with access to equal and effective schooling that not only ensures their attendance but will also improve performance in school.

In targeting these inequities, we must address the problems of redlining, aversion to diversity and unequal school funding. According to a U.S. Commission’s report on civil rights, schools with predominantly students of color receive on average $2,000 less per student in funding than schools with significantly fewer students of color. By eliminating local funding completely, state legislatures can deny white, wealthier communities the opportunity to disproportionately gain advantages in funding their public schools through local property taxes. Compared to schools with mostly white students, predominantly minority schools receive less funding, contributing significantly to the disparities in academic achievements and students’ merit when college admissions come into play.

Maggie Fan is a first-year in the College.