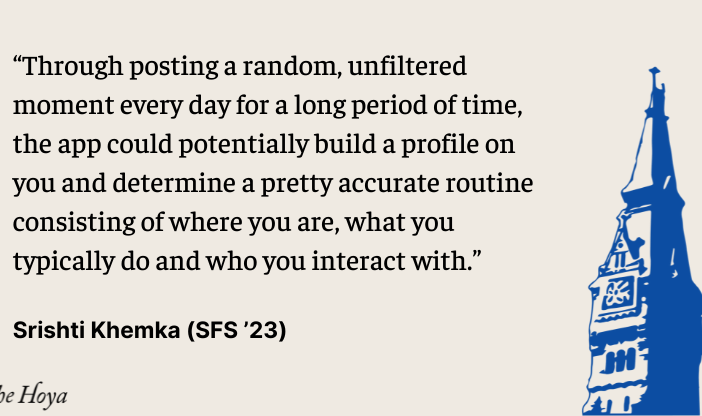 Halloween is over, and the creepiest things on campus are not the rotting pumpkins or leftover fake cobwebs, but the new social media app BeReal.

BeReal, the newest social media craze that seems to have a hold on Georgetown University, seeks to promote “authenticity” by asking users to post their real everyday lives rather than a filtered picture taken at the perfect time. The app claims to help users “discover who your friends really are in their daily life,” but it is really a frightening privacy intrusion in an era of already extensive data collection.

BeReal notifies all users at a random time once a day that they have two minutes to post what they are doing at that moment. It captures and posts both the front and back side of the camera, so followers can see what users are doing at that precise moment. Users don’t have to post on time, but they cannot look at their BeReal feed until they post for the day. BeReal is completely unique in its premise of explicitly asking people to post something at a certain time and denying people access to their feed until they post. The app’s purpose is to strip away the polished posts and filtered photos to present a more realistic reflection of daily life. When I scrolled through a BeReal feed myself, I thought it did a really good job of doing that as I saw everyone’s quirky selfies of themselves lying in their beds or clinging to a cup of coffee for dear life in Lauinger Library.

Despite this noble mission, BeReal’s encouragement of daily posts hints at a much more dangerous reality. Through posting a random, unfiltered moment every day for a long period of time, the app could potentially build a profile on you and determine a pretty accurate routine consisting of where you are, what you typically do and who you interact with. This is no different, of course, from many social media platforms, such as Facebook’s laserlike ad targeting and Snapchat’s Snap Map feature. However, the difference between BeReal and other popular social media platforms is that we did not understand the extent of data abuse and collection of these platforms five years ago the same way we do today.

We have already seen the potential dangers of social media data collection. The Chinese government has surveilled citizens using the messaging app WeChat, and hackers like Tom Liner have been known to scrape social media profiles and sell detailed information about users to the highest bidder on the dark web. While BeReal’s privacy policy is under the jurisdiction of the European Union’s General Data Protection Regulation laws and promises to not sell personal data or information without prior consent, this social media platform could potentially choose to sell your data to third parties as it becomes more popular and more profitable, making you vulnerable to mild to extreme invasions of privacy ranging from targeted advertising to full surveillance. Even worse, data scrapers could hack the social media app and create a detailed profile of your routine based on your BeReal posts, which the platform can hold for up to three years after the last use of the app and sell to the highest bidder or maybe even worse. With or without the app’s consent, the privacy of its users is in danger.

To promote its new platform, BeReal has been sponsoring events held by various clubs on Georgetown’s campus to promote usage. Armed with all of the evidence of previous social media abuses, we have the power and knowledge to shape our engagement with it. With the specialized focus the app seems to have on college campuses like Georgetown at the moment, we as a community have the ability to make a statement about this app: We do not want it. We do not want to make ourselves vulnerable to the potential dangers that lurk behind “being real.” We do not want to become another chapter in the current story of social media use and abuse.

Srishti Khemka is a junior in the School of Foreign Service.