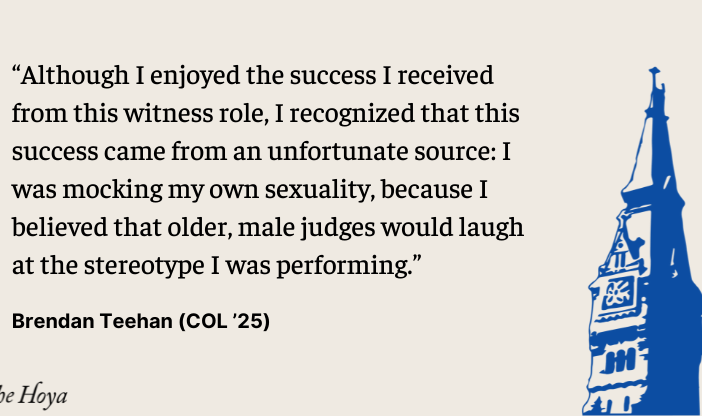 During practice for an upcoming competition, one of my captains on the Georgetown Mock Trial (GUMT) team approached me, in front of our team, to discuss a witness role I was going to play. He asked me, “Brendan, you know how you told me that every witness you play is just gay and sassy?” Although I was surprised that he brought this comment up in front of my teammates, it forced me to confront the previously unquestioned observation that each of my witness portrayals had played into gay stereotypes.

I am one of very few openly queer members of GUMT, and by next year, I will be the only openly queer man on the entire 30-person team. These demographics are a byproduct of a culture in mock trial that rewards both heteronormativity and masculinity. This culture is not necessarily the fault of GUMT as an organization, or any of its members, but rather it exists because mock trial is structured to uphold different standards for its queer competitors.

The American Mock Trial Association (AMTA) — the organization that runs college mock trial competitions across the country — relies on volunteers, often practicing attorneys, to judge all competition rounds. As a member this year, I participated in six tournaments, each of which had four rounds and an average of two to three scoring judges per round. The overwhelming majority of these judges were white, male and over fifty, and these shared demographics mean our judges often have similar perspectives on what makes a trial “good.”

Since the judges are predominantly responsible for determining GUMT’s successes and losses, the team’s practices often consist of discussions weighing how this older, white, male audience will respond to a certain witness line or case theory. Consequently, attorneys on the team regularly curate their performances to fit hypermasculine standards. Time and again, judges praise our male attorneys for their aggressive tones and commanding presences, whereas our female attorneys are docked points for presenting the same qualities. Character witnesses, however, usually score highly for their theatricality and ability to entertain. To cater my role to these criteria, I thought playing a gay witness was a no-brainer.

I was assigned to be a witness in my first competition this semester, and along with the attorney I worked with, I tapped into some common gay stereotypes for the character I played. I exaggerated my theatrical mannerisms and wrote that my job was as “a floor manager at Aéropostale,” which became a team favorite. Although I knew I was playing a caricature, I was proud of my writing and my performance, and I anticipated that the judges would find me funny. It worked. At the competition, I was regularly ranked one of the top witnesses in each round I performed in, and I ended that tournament with an all-regional witness award.

Although I enjoyed the success I received from this witness role, I recognized that this success came from an unfortunate source: I was mocking my own sexuality, because I believed that older, male judges would laugh at the stereotype I was performing.

My success as a gay witness has also had unforeseen consequences for my sense of self-worth on GUMT. From regularly being cast as flamboyant, “character”-style witnesses, to being asked by one member where to buy “a cute women’s blouse,” (unfortunately, I had no idea), my first year in this club has been marked by feelings of tokenization. I cannot help but see connections between how I portrayed my witness roles and the questions I received about fashion. Although the majority of GUMT tryouts test my abilities as an attorney, I often worry that my next three years in this organization will only involve playing the token gay witness.

Instead, I hope to spend the next three years deconstructing the unspoken association between queerness and theatricality. Although part of the solution involves AMTA diversifying its judging population to include currently underrepresented perspectives, mock trial teams must also recognize their queer witnesses as multi-faceted performers. Throughout the six tournaments I attended this year, I have encountered flamboyant men at each competition performing similarly queer-coded witness roles. Although gay mock trial members are often incredibly talented in caricature-based queer witness roles, and should have the right to leverage their queerness to find success in mock trial, we are also intelligent, hardworking and well-rounded, as both non-character witnesses and as attorneys. And given the chance, we are ready to prove that our worth is far greater than playing a stereotype.

Brendan Teehan is a first-year in the College.