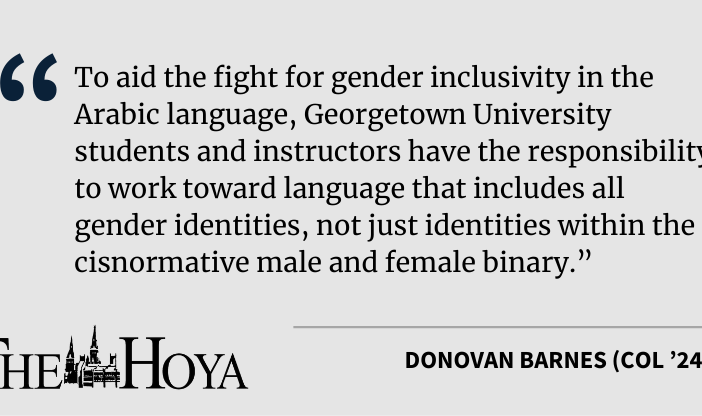 I was extremely nervous to begin studying Arabic at Georgetown University. Like most people who study Arabic, I had some valid concerns about learning a language radically different from my first language, English. I never thought about how the language intersected with a person’s gender identity, however, until I began taking courses. I realized the lack of gender-inclusive Arabic pronouns excludes nonbinary and gender-nonconforming students interested in learning the language.

Gender-neutral pronouns are not widely taught in Arabic courses at Georgetown, likely because inclusive pronouns are still developing in the Arabic-speaking community. To aid the fight for gender inclusivity in the Arabic language, Georgetown students and instructors have the responsibility to work toward language that includes all gender identities, not just identities within the cisnormative male and female binary.

Exploring inclusive pronouns is not a simple task; gendered language in Arabic is inescapable. Unlike English, Arabic assigns gender to all its pronouns aside from “we,” including its object pronouns, possessives, tenses and more. Some words even change gender depending on the subject. Arabic designates gender to its “they” and “you” pronouns as well. It remains a monumental task to completely and naturally deviate from gender within Arabic. Nonbinary and gender-nonconforming students are reminded of a very uncomfortable reality when learning and speaking Arabic: The language is not suited for them.

Often cited as gender-neutral workarounds, the dual of “they” and “you” — هما and أنتما — are the most popular alternatives in Arabic. These pronouns are not without their faults, however. Both pronouns are still gendered with separate masculine and feminine forms. Further, these pronouns are rarely used in colloquial speech, so they may elicit confusion from native speakers. Using these pronouns for a singular person would be even more confusing.

While the current gender-neutral standard in Arabic may have its flaws, the standard remains an option for nonbinary and gender-nonconforming people. The push for gender inclusivity in Arabic is ongoing, and the Georgetown community must facilitate the conversation on gender inclusivity within Arabic courses. Deviation from the norm would certainly raise some traditionalist eyebrows, however, and not in a curious, eager-to-accommodate way.

Arabic has historical and contemporary ties with Islam and religious tradition, and it may be challenging to deviate from the language’s norms. Nonetheless, Arabic speakers whose gender identities do not align with the norms of the language should not have to compromise their identity. They deserve representation.

Institutions of higher learning like Georgetown can and should be at the forefront of this gender-inclusive conversation. Instructors can encourage student experimentation and the eventual standardization of gender-neutral language and pronouns in Arabic courses. Students can help their LGBTQ+ peers feel included and valid through language exploration. Organizations like the Georgetown University Press — a university-affiliated publisher of books and journals — can include gender-neutral language in their Arabic education materials. Students, instructors and publications can set the precedent for all others to follow.

Donovan Barnes is a first-year student in the College.

This article was updated on Mar. 26, 2021 to reflect the nature and purpose of Georgetown University Press.