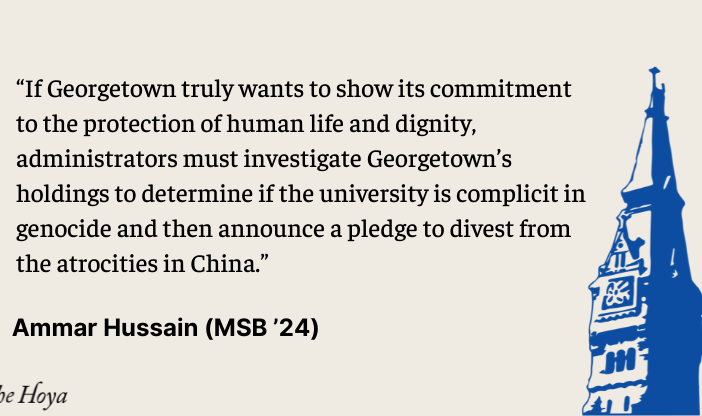 “Recognizing that the endowment shall not be used as a tool to promote a political agenda, the University shall continue to integrate its commitment to social justice, protection of human life and dignity, stewardship for the planet, and promotion of the common good into its investment management practices,” the SRI website reads.

On Jan. 23, 2022, the GU Muslim Student Association and Hong Kong Student Association penned “An Open Letter Calling for Divestment from Ongoing Genocide and Crimes Against Humanity” with co-sponsorships from the Georgetown Bipartisan Coalition, College Republicans and College Democrats.

The letter aims to hold the university accountable for its silence and compliance regarding the Chinese government’s genocide against Uyghurs and other ethnic groups. It calls on Georgetown to reject the actions of the Chinese government and divest itself from any investments that may implicate the university in the ongoing genocide in the Xinjiang Uyghur Autonomous Region.

If Georgetown truly wants to show its commitment to the protection of human life and dignity, administrators must investigate Georgetown’s holdings to determine if the university is complicit in genocide and then announce a pledge to divest from the atrocities in China.

There is clear evidence that the Chinese government’s abuses amount to genocide. The Chinese Communist Party has detained up to three million people, consisting mostly of Uyghurs, a Turkic ethnic group native to Xinjiang. Detainees have been subjected to torture, enforced disappearances, forced labor and repressive population control measures, including forced sterilizations.

The Newlines Institute similarly found that the Chinese government is responsible for breaching the 1948 Genocide Convention by committing genocide against the Uyghurs.

The Chinese government claims that their detention camps are necessary to fight extremism. The government has explained further that the camps are merely “vocational training” centers meant to re-educate the Uyghurs, but the evidence overwhelmingly rejects that narrative.

Detainees have provided detailed descriptions of the torture and humiliation they faced and footage posted online reveals the terrible conditions inmates are subjected to.

This is not a political matter — taking action transcends partisan politics. The United States government has continuously indicated under both the Trump and Biden administrations that it wholeheartedly rejects the Chinese government’s actions.

In 2020, the Senate unanimously passed the Uyghur Human Rights Policy Act of 2020, which imposed sanctions on certain individuals involved with the genocide. Then, in January 2021, the U.S. became the first country in the world to officially label the atrocities as genocide.

More recently, President Biden signed the Uyghur Forced Labor Prevention Act into law in December 2021; the bill banned imports of all goods whose supply chains potentially touched forced labor in the Xinjiang region. In an age of hyper-polarized politics, this has been one issue on which both parties have reached a consensus.

Georgetown would be in clear violation of its SRI Policy should it be complicit in the genocide through its investments. The very first strategy Georgetown lists to implement the SRI Policy is “Do No Harm.”

As part of this strategy, the website says that “the University shall use reasonable efforts to avoid investments in companies that have demonstrated records of widespread violations of human dignity.” As such, it would be unconscionable to invest in any company whose products were directly or indirectly made by Uyghur forced labor in Xinjiang.

The university further explains that its SRI Policy “aligns the university’s investment strategy with its commitment to social justice, protection of human life and dignity, stewardship for the planet and promotion of the common good.”

Divestment is not a new concept for Georgetown. On Feb. 6, 2020, Georgetown’s Board of Directors announced a commitment to divest from all public securities of fossil fuel companies, given that fossil fuels are a detriment to the environment. Given this precedent for divesting from morally reprehensible sources, Georgetown should do the right thing and apply this same thinking to the Uyghur genocide.

Georgetown must take several steps to properly advocate for human rights. First, Georgetown must thoroughly investigate its holdings, funds and other financial instruments to determine whether any are connected to the genocide. Second, the university should immediately pledge to divest from any investments that would make Georgetown complicit in the genocide. Third, Georgetown should publicly announce a commitment not to invest in any such holdings, funds and instruments in the future.

As students, it is imperative that we sign onto the open letter, pressuring the university to publicly confirm that it is adhering to its SRI Policy as it relates to the Uyghur genocide.

Ammar Hussain is a sophomore in the SFS/MSB. Ammar is on the executive board of the GU Muslim Student Association and works as a Fellow for the Office of Muslim Life. The views expressed are his own and are not reflective of those of the MSA or OML.