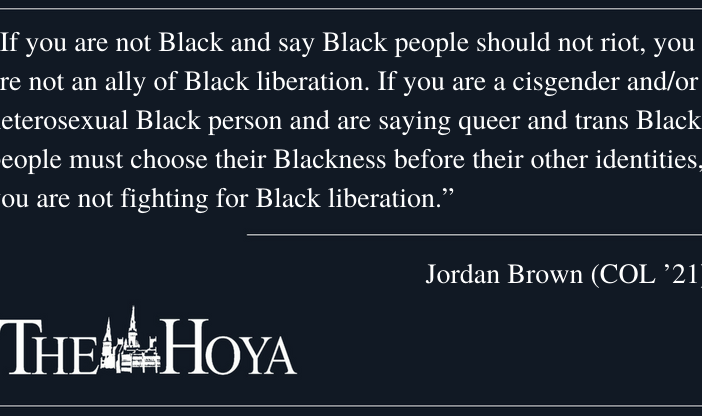 As a queer Black person, I come from a long line of freedom fighters. From the abolitionist Maroons of my family’s home country of Jamaica to movement leaders like Gloria Richardson and Marsha P. Johnson to disabled Black women such as Fannie Lou Hamer and Harriet Tubman, I am incredibly proud of my legacy. Even if I am not directly descended from these people, they and their spirit of resistance are a part of my heritage.

Everyone I mentioned was considered radical for their time. Tubman did not beg slaveowners for her freedom, and Johnson did not meekly request civil rights from the state or the police. They were revolutionaries. They defied the systems that oppressed them and simultaneously envisioned a world where all Black lives — women, transgender, queer, disabled and fat Black lives — matter.

My heritage does not include people who believe the best philosophy of liberation is one that focuses on the comfort of our oppressors. My heritage is not peaceful protests or “not all cops.” It is slave revolts and “fuck 12.” My legacy is not pinkwashing — when military institutions portray themselves as gay-friendly to distract from their violent imperialism — or rainbow capitalism. It is the irrefutable fact that Stonewall, the first pride, was a riot against police violence. My heritage says the powers that be will not grant social equality. Rather, marginalized people will demand and seize it ourselves.

This legacy of resistance informs my politics. My legacy tells me that, because modern law enforcement originated as patrols to hunt down escaped slaves, there is no way to reform it. We must abolish the entire system of policing because it is inherently designed to limit the freedom of Black people. My legacy tells me that, because capitalism arose at the same time as the slave trade — which wrote off disabled Black people as literally worthless because they could not do manual labor and only understood Black women to be incubators for more slaves and therefore more capital — we must push for a world without capitalism because it is inherently anti-Black, ableist and misogynist.

My heritage is also one of radical love, a love that intentionally includes the most marginalized in our society instead of focusing on abstract, mollifying concepts like diversity and representation. For allies, radical love does not mean only sharing aesthetically pleasing graphics about anti-Black violence online or posting a pointless black square on your feed. Radical love means challenging anti-Blackness — including misogynoir, transmisogynoir, colorism and anti-Black ableism — wherever you encounter it, whether that be in your family, in your friend group, on your social media timeline or at protests.

Without intersectional, radical love, only certain Black lives matter: those of cisgender, heterosexual, non-disabled Black men. There is a reason so few people know the names Charleena Lyles — a mentally ill Black woman who was murdered by police in Seattle — or Layleen Polanco — a trans Afro-Latina who was found dead at Rikers Island — as opposed to George Floyd or Rayshard Brooks. The absence of intersectional, radical love is the reason why neither Toyin Salau nor Matthew Rushin is getting as much news coverage or public outrage as Floyd or Brooks.

If you center yourself and your personal comfort instead of the most marginalized Black people, you are not an ally or freedom fighter; in fact, you are an enemy of the fight for Black liberation. This movement necessitates listening to Black women, unlearning ableism and protecting Black queer and trans people.

Black liberation means fighting — yes, fighting, whether it be against state or interpersonal violence — for all Black lives. None of us will be free until each of us is free.

Jordan Brown (she/her or he/him) is a senior in the College.