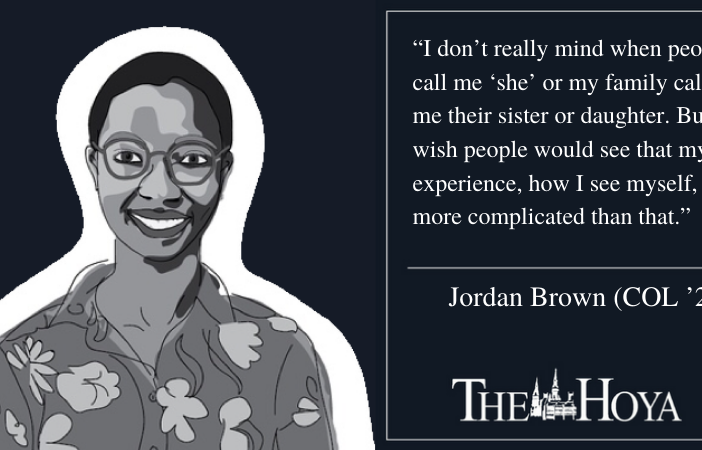 If you’re on social media sites like Tumblr, Twitter or Facebook, you’ve probably seen queer and trans people and allies make jokes about how “gender is fake.” The joke is based on the fact — not opinion, but fact — that the gender binary Western society has socialized us to believe isn’t as set in stone as we were taught. Many people now accept that there are more than two genders and that things like makeup and certain haircuts do not belong to only one gender. Even biological markers of sex like chromosomes, hormones and genitalia do not fall into two completely separate camps. That is, gender is fake.

Transgender people are a prime example of the fact that gender is not a predetermined, unchangeable fact of human existence. Trans people do not represent some new phenomenon; they have always existed in various societies throughout history. However, they probably did not call themselves trans. They probably still called themselves women or men, even if they didn’t identify with how everyone else saw them, because of the widespread, steadfast belief in the gender binary that led to transphobic violence. My experience is pretty similar to what I’ve described. Even now, I still often call myself a woman; however, my conceptualization of myself is far more complex.

As a kid, everyone thought I was a run-of-the-mill tomboy. I had an irrational hatred of Barbie dolls and the color pink. I refused to wear dresses until an eighth grade dance mandated that girls wear them. I spent more of my time playing with boys than I did with other girls. In sixth grade, when my school had different summer reading books for male and female students, I asked if I could read the boys’ book because the one I was assigned was “too girly.. I ended up being right about that one, though — the book was terrible.

However, there was something more going on beneath the surface that I never really told anyone about. In second grade, my notebooks had “I want to be a boy” scrawled in every margin. Every time I’d find a dandelion, I would wish to be a boy. I would later learn that most other people assigned female at birth didn’t constantly have these kinds of thoughts.

For most of my life, this didn’t affect me too much — I was just still kind of a tomboy. I cut my hair short senior year of high school. My style runs the gamut from frilly pink skirts to button-downs and suit jackets. I get called “sir” or “man” out in public relatively often. About three years ago, I started to call myself gender nonconforming and introduce myself with both she/her and he/him pronouns, and my friends call me either one. I didn’t think too much about it — until recently.

According to most definitions, I’m not cisgender; however, I don’t necessarily identify as trans. I still feel very much tied to the experience of Black womanhood. Because I am Black, assigned female at birth and seen by most people as a woman, my experiences and interactions are inherently affected by misogynoir, a form of oppression faced by Black women. I don’t really mind when people call me “she” or my family calls me their sister or daughter. But I wish people would see that my experience, how I see myself, is more complicated than that.

Calling myself gender nonconforming or using two sets of pronouns doesn’t fully capture how I feel about myself genderwise. I’m not nonbinary or agender —  my uncertainty is due to the fact that I feel tied to both “extremes” of gender: man and woman. I don’t know how to explain that when I’m doing my Spanish homework, it just makes more sense for me to refer to myself with masculine adjectives, or that sometimes when I think of myself, I think of myself as a guy. But, I still use she/her pronouns and like wearing dresses. And that’s fine because, well, gender is fake.

I was talking to an acquaintance the other day about gender. They said to me, “I don’t know how you identify,” and I laughed and said, “I don’t either.” Lately, I’ve been thinking that I need to hurry up and figure out this whole gender thing so other people can understand my identity. But I don’t know if people even need to understand it. I just need them to know that gender is fake.

Jordan Brown is a junior in the College. Queering the Narrative appears online every other Thursday.