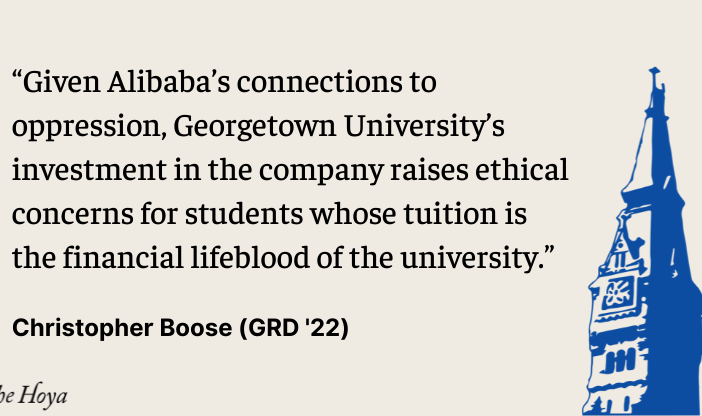 With inflation already squeezing families’ budgets, Georgetown University’s latest tuition hike may have students and their parents wondering how Georgetown spends its dollars. They may be surprised to discover something hiding behind student activities fees and dining plan subscriptions: support for foreign forced labor. Students won’t find it listed out on their Student Accounts bill, but Georgetown students are indirectly connected to ongoing atrocities the Chinese government has committed against Uyghur and other Turkic minorities in Xinjiang. Amid growing student concerns about connections to the genocide, now is the time for Georgetown University to act by divesting from complicit Chinese companies.

In an Aug. 12 filing with the U.S. Securities and Exchange Commission — the government entity responsible for regulating stock trading and other investments — Georgetown reported that as of June 30, 2022, it had acquired a direct $12 million dollar investment in Chinese e-commerce giant Alibaba. Alibaba is considered the Amazon of China based on its similar business models and the large volume of sales conducted on its platform. It is also complicit in the People’s Republic of China’s (PRC) ongoing mass internment and oppression of Uyghur Muslims. The PRC’s actions, which the independent Uyghur Tribunal and the United States have both deemed a genocide, have seen over a million Uyghurs and other Turkic peoples detained in a large network of concentration camps and subjected to mental, physical and sexual abuse.

Alibaba’s ties to the Uyghur genocide are brazen. Until recently, the company barely made an effort to hide them. In December 2020, the surveillance trade publication IPVM reported that Alibaba “openly offer[ed] Uyghur/ ‘ethnic minority’ recognition as a cloud service.” This feature would alert potential users of the service, such as social media companies enforcing strict government censorship, any time Alibaba detects videos of a member of the Uyghur community on their platforms.

Alibaba also owns the hugely popular platform Taobao, one of the most visited websites in the world, which has been used to auction the belongings of Uyghurs unjustly imprisoned. Alibaba has also implicated itself in the government’s deliberate campaign to crush Uyghur identity through its cooperation with the People’s Liberation Army, developing cutting-edge military technologies.

Given Alibaba’s connections to oppression, Georgetown University’s investment in the company raises ethical concerns for students whose tuition is the financial lifeblood of the university. While tuition dollars are not directly invested in the endowment, students pay tuition for access to the education that University provides, an education that is financially supported in part through investment returns. Resulting from this financial connection, students must contend with the risk that their dollars indirectly support genocide abroad.

Faced with this concern, a dozen student groups with over 100 students petitioned for change this Spring. The undergraduate student senate followed up with their own unanimous resolution urging the university administration to act. As of now, however, Georgetown has failed to act on the student demands, compelling the undergraduate senate to reiterate its concerns this month. A new proposal to Georgetown’s investment watchdog committee would do just this, applying principles from Georgetown’s own Socially Responsible Investing Policy, which promises to “Do No Harm” by avoiding “investments in companies that have demonstrated records of widespread violations of human dignity.”

The University has done this before. In 2020, Georgetown’s Board of Director committed to divesting from fossil fuel companies as a part of its Socially Responsible Investing Policy. Georgetown also has a history of reevaluating its investments abroad. Back in 1986, Georgetown’s administration had the courage to divest itself from apartheid South Africa, setting aside investments that made up around a sixth of the university’s endowment at the time.

While the administration hasn’t responded, Hoyas are certainly not alone in their advocacy. By voting for divestment, Georgetown’s student senators joined the ranks of student advocates at Catholic University and the University of Maryland, Baltimore County. In January, Yale University’s Advisory Committee on Investor Responsibility announced it would open an investigation into its own endowment’s potential links to human rights abuses in the PRC.

By raising these concerns, Hoyas positioned Georgetown to be a potential leader on divestment. Administration inaction, however, may leave the university complicit in genocide and a laggard among its peers. It is time for Georgetown to take a page out of their own Socially Responsible Investing policy to “Do No Harm” by divesting from Alibaba and scrutinizing the rest of its portfolio.

Christopher Boose is a graduate student in the College.