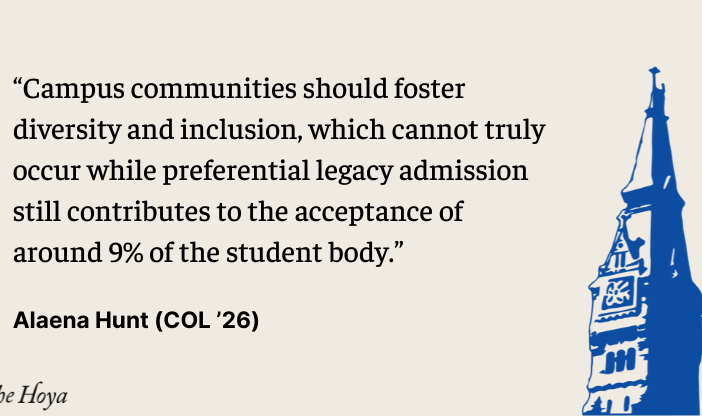 When I chose to attend Georgetown University, I was most excited about the variety of perspectives I would engage with on a campus in a huge metropolitan area. Coming from Stowe, Vt., a very white and socioeconomically advantaged area, I had not experienced much socioeconomic, racial and ethnic diversity. However, upon my arrival to campus, I found striking parallels to my hometown. I believe the lack of socioeconomic, racial and ethnic diversity at Georgetown is partly a result of the university’s practice of preferential legacy admissions, which creates an unhealthy community of exclusivity that should not be on a college campus. If preferential legacy admission were no longer used, I believe Georgetown would be much more diverse.

At Georgetown, an astonishing 21% of students come from the top 1% of median family income, and 74% of students come from the top 20%, while just 3.1% of students are from the bottom 20%. We can conclude from these statistics that Georgetown’s student population is disproportionately wealthy, excluding students in lower income brackets from accessing a Georgetown education. Preferential legacy admissions only perpetuates this exclusion because when admissions officers give preference to students who have relatives that attended Georgetown, these students predominantly come from higher income families, so their preferential treatment prevents the percentage of students in the bottom 20% from growing substantially, thus perpetuating socioeconomic exclusion.

The community Deacon refers to is a homogenous community in which there is grave socioeconomic, racial and ethnic exclusion, and that is not the type of community that belongs in a campus providing higher education. Campus communities should foster diversity and inclusion, which cannot truly occur while preferential legacy admission still contributes to the acceptance of around 9% of the student body.

Although I recognize a college community is strong when there are familial connections between graduates and current students, this argument does not take into consideration the importance of making universities accessible to different demographics. Creating a community in which family tradition is continued should not be a concern of the admissions office, as its job is to admit students who have earned their place in the incoming class and will make our campus community more inclusive and diverse.

No current student who was admitted with a boost from legacy status should feel a sense of guilt or imposter syndrome. There is no question that students who benefit from legacy preference are often highly qualified themselves. However, I still insist that, for future classes, legacy should not be considered so all applicants begin on a more equal playing field.

At Georgetown’s traditional first-year convocation, the new students walk through a tunnel of graduates. I noticed during my convocation that many of the graduates had a badge that said “Hoya Parent” in big lettering. I also noticed that most of them were white and wearing designer brands. I wondered how that tunnel of graduates, as well as the students walking through it, would change if Georgetown did not practice preferential legacy admissions. Johns Hopkins University has ended its practice of preferential legacy admissions and the school has reported that the reform “has resulted in a diverse student body with high academic abilities.”

Not considering legacy status in admissions decisions would make available more spots for students from a wider variety of racial, socioeconomic and cultural backgrounds. In the decision between diversity and legacy, the correct choice is diversity. There is no doubt in my mind that getting rid of preferential legacy admission would foster a more diverse and open community.

Alaena Hunt is a first-year in the College.