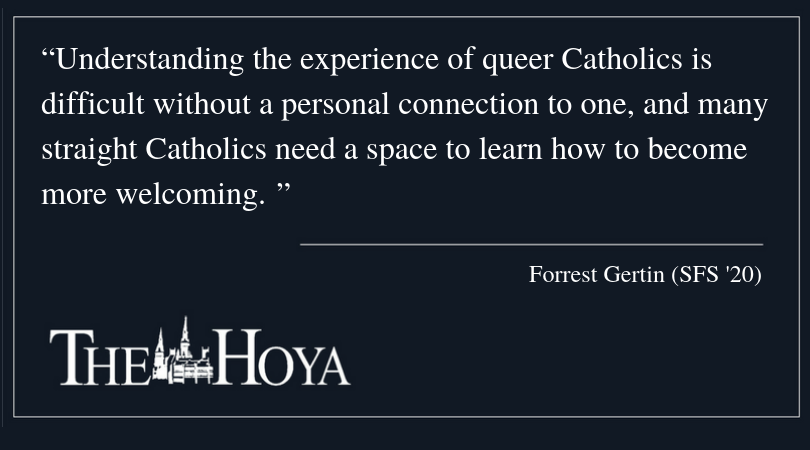 Once a month, the Catholic community here at Georgetown University hosts “Hospitality Sunday.” We order food, decorate Dahlgren Quad and stick around after Mass while faith groups advertise their programs. In September, a gay student ordered the food. A gay student played the piano. A gay student read the psalm. Openly gay students tabled for Catholic retreats, and several more simply came to worship like they do every Sunday.

When the news of the 2016 Pulse nightclub shooting in Florida reached me, I looked to my faith. Pope Francis’ statement did not even mention that the victims were unified by one key characteristic: They were LGBTQ. I felt ignored. So, I called my priest, who helped me work through that conflict between my faith and gay identity.

Other LGBTQ Catholics at Georgetown find similar comfort in their faith. One, a leader on the Catholic Student Advisory Board, which aims to connect the Catholic chaplaincy with students in a way that meets students’ needs, described Catholicism as a place of “strength and solace.” Another, a Catholic retreat leader, said confession was a chance to get guidance while coming out. He said he “leaned on [his] faith in coming out … for answers, and for the strength to do it.”

But when asked what the Catholic chaplaincy does for LGBTQ students at Georgetown, these students agree: not enough. “Campus ministry doesn’t do anything for the gay Catholic community,” Harry Clow (MSB ’19) said. “There are no conversations on it, yet it’s something that’s of global and national importance to the Catholic Church.” An effort to collaborate with GU Pride found support from “mostly Protestant ministry,” but not the Catholic chaplaincy, according to Madison Alvarez (COL ’21), GU Pride’s director of advocacy.

Georgetown is well-positioned to begin discussions about LGBTQ and Catholic identities. Our campus holds not only an observable presence of involved, LGBTQ Catholics but also a community of young people with a wide range of views on Catholic issues. They have an appetite to address them: Student-led activism around the clerical sexual abuse crisis made Georgetown reconsider its honorary degree policy, and GU Women in Faith has hosted discussions on increasing the role of female leaders within the church. Georgetown should capitalize on student interest and intellectual resources like the Initiative on Catholic Social Thought and Public Life to lead dialogues on Catholicism and LGBTQ identities.

Rev. James Martin, S.J., in his seminal book on Catholic and LGBTQ reconciliation, “Building a Bridge,” noted that respecting and recognizing LGBTQ Catholics requires carrying out ministry to their communities. Separately, the 1993 Catechism of the Catholic Church instructs that we be “accepted with respect, compassion, and sensitivity.”

Yet the Catholic chaplaincy conspicuously avoids even the easiest opportunities to provide such ministry: When the LGBTQ Resource Center brought Martin to campus last spring, the Catholic chaplaincy did not sponsor the event. I’m tired of hearing Rev. Greg Schenden, S.J., director of campus ministry, say, “We have an LGBTQ center because we’re Catholic!” each year at the New Student Orientation Jesuit Values Panel, as if that’s a panacea for true outreach.

Effectively ignoring this community leaves LGBTQ Catholics feeling unwelcome. Citing the fall 2017 Love Saxa debacle, Clow said, “When we’ve had issues on campus that have intersected with Catholicism and with homosexuality, there’s been nothing from campus ministry.” Others talked about how their less-involved friends feel excluded when officials do not offer perspectives to balance the loud voices from conservative, anti-LGBTQ Catholics. Chad Gasman (COL ’20), a past president of GU Pride, described a series of interactions with Catholic ministry that were “surface level, with no attempt to address or acknowledge the rampant homophobia within the Church. It always feels like ‘love the sinner, hate the sin.’”

Outside of campus ministry, Georgetown already does a lot for its LGBTQ students. The LGBTQ Resource Center, the Crossroads living learning community and wide-ranging support from administrators, LGBTQ and allies themselves, are examples of an outstanding campus cultural change over the last decade.

However, a greater acceptance of LGBTQ students on campus should not be confused with an effort toward inclusion by the Catholic chaplaincy. Student leaders have offered myriad suggestions on how to fill that void. Perhaps the simplest is an LGBTQ Catholic faith community or prayer group. Other ideas include service outreach to a homeless shelter serving LGBTQ youth paired with reflection on said service and resources from the Jesuits on how to balance LGBTQ and Catholic identities. Such events would realize the Catholic “responsibility to make everyone feel visible and valuable,” as Martin describes in his book.

Even if not a single LGBTQ student showed up, such events would be good for straight Catholics. The status quo suggests that they don’t understand LGBTQ Catholic students, who currently don’t feel comfortable in the Catholic community because of its long history of institutional homophobia or its expression in parishes back home. Understanding the experience of LGBTQ Catholics is difficult without a personal connection to one, and many straight Catholics need a space to learn how to become more welcoming.

Forrest Gertin is a junior in the School of Foreign Service.