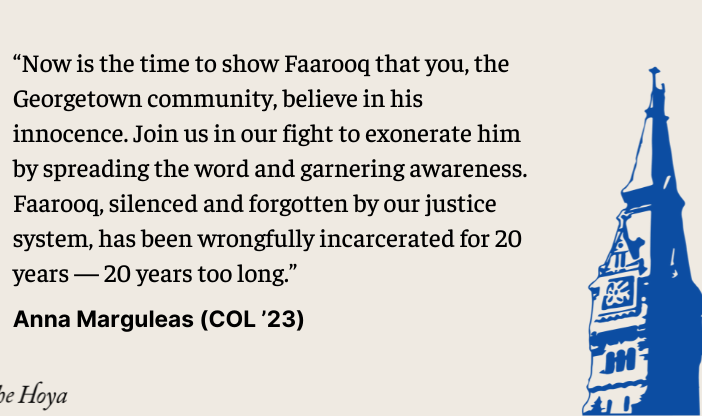 Georgetown University’s “Making an Exoneree” class has secured three exonerations during its four years of operation. I am fortunate enough to be a student in the course’s fifth year. My group, “Team Faarooq” — made up of Ty Greenberg (SFS ’22), Symone Harmon (COL ’22) and myself — believes our case will be the fourth. We are working to exonerate Andrew D. Lee (now Faarooq Mu’min Mansour) who has been imprisoned for 20 years for a crime he did not commit.

Having reviewed the case in its entirety and gotten to know Faarooq on a personal level, we support his innocence — and know that significant exculpatory evidence exists.

On March 25, 2002, Shauna Sandercock, the owner of a video game store, was murdered in the back room of her establishment. Her gun, stolen during the commission of the crime, was found in the possession of a known criminal in Atlanta months after the murder.

A friend of Faarooq’s has signed an affidavit stating that the two of them were together outside of his house while the true perpetrator committed the crime. Most importantly, DNA profiles of two different men were found on the victim but were never run through the Combined DNA Index System (CODIS), a national database that consists of the DNA profiles of convicted offenders. CODIS also includes profiles developed from evidence in unsolved crimes and evidence used to identify missing persons.

Faarooq was scientifically excluded as matching neither of these profiles. The answers that CODIS could provide are essential to his exoneration.

On March 29, 2002, three dozen police officers and SWAT agents surrounded Faarooq Mu’min Mansour outside of his family home in Columbus, Ohio. Without knowing the crime for which he was being arrested, Faarooq believed this was a case of mistaken identity. Following the advice of his father, he allowed the police to handcuff him and take him for questioning. Unbeknownst to Faarooq and his parents, he would never return home.

Faarooq was wrongfully convicted in 2003 of robbery, kidnapping, rape and murder. He was, consequently, sentenced to life in prison without the possibility of parole.

At the root of his wrongful conviction is the insidious, pervasive and fatal grip that racism holds over the United States and its justice system. The Innocence Project found that “innocent Black people are seven times more likely to be wrongfully convicted of murder than innocent white people.” The statistic is even higher when the victim is white.

His case is representative of how white supremacist ideology relies on the stereotyping of Black men as predators to justify mass incarceration, and Faarooq, a wrongfully convicted Black man, understands the role that racism played in his trial and conviction.

Addressing the jury in his closing speech during sentencing, Faarooq noted that innocent Black men are too often accused of raping and murdering white women. For the past 20 years, he has been one of countless innocent Black men wrongfully convicted and wrongfully incarcerated. His jury, supposedly composed of 12 of his “peers,” included only one Black member, Faarooq said.

Ever since his conviction, Faarooq has maintained his innocence and pleaded for more DNA testing to be done, knowing that it will prove without a doubt that he is telling the truth. His case, however, is at a standstill due to the denial of his motion to request a new trial.

Additionally, the three eyewitnesses who saw the suspect inside of the video store on March 25 were all white and their descriptions of the suspect’s physical appearance did not match Faarooq. Two of them picked Faarooq out of a photo lineup. The photo of Faarooq used in the lineup, however, was around a year old and did not match his appearance at the time of the crime.

What’s more, the defense never called an expert witness to address potential issues with the administration of the photo lineup, or concerns about cross-racial identification, stress factors and weapon focus.

Now is the time to show Faarooq that you, the Georgetown community, believe in his innocence. Join us in our fight to exonerate him by spreading the word and garnering awareness. Faarooq, silenced and forgotten by our justice system, has been wrongfully incarcerated for 20 years — 20 years too long.

Anna Marguleas is a junior in the College.