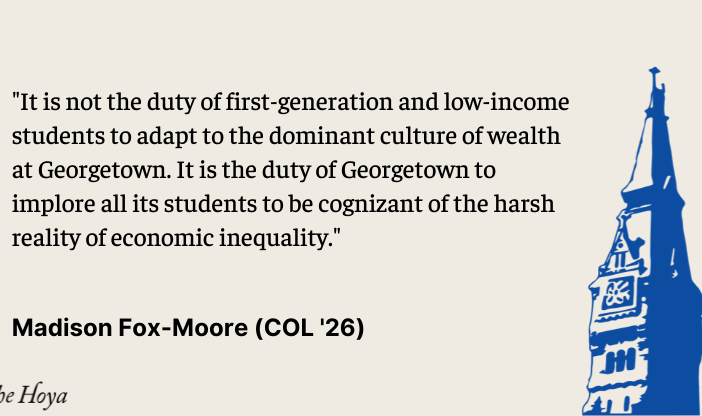 It is no secret that, as a university with more students from the top 1% of the income scale than the bottom 60%, Georgetown University’s wealth distribution greatly favors the upper class. While Georgetown has strived to increase the representation of low-income students on campus, the social impact of socioeconomic disparities remains the elephant in the room for its less advantaged students. Elite universities have a duty to rectify the invisibility of class privilege to those who hold it; Georgetown can do so by expanding existing programs such as the class “Mastering the Hidden Curriculum” to expose the realities of socioeconomic diversity to its privileged student body.

In 2004, Georgetown joined the growing effort of schools like Notre Dame, Brown and Northwestern to increase the representation of First-Generation Low Income (FGLI) students at elite universities through the Georgetown Scholars Program (GSP). The GSP supports FGLI Hoyas through grants, mentorship, advocacy and community building, which have enjoyed widespread success. The graduation rate for GSP students is 94%, which is 3.6 times higher than the national graduation rate for first-generation college students.

One of the most valuable GSP resources is the “Mastering the Hidden Curriculum” (MHC) course. This two-credit course is open to all students, but GSPers receive priority registration, and the course is largely guided by its two GSP Teaching Assistants. The course is meant to equip students with the skills and cultural capital to navigate Georgetown’s academic community and collegiate environment,” and it largely succeeds in this endeavor.

From discourse on the unique identity of FGLI students to presentations from the Cawley Career Education Center, the MHC course provides invaluable resources for its students. Classes focus on the power of privilege, the persistence of classist structures on college campuses and the diversity of FGLI experiences. For me, as a first-year student who has never before had the courage to publicly identify as FGLI, the power of the MHC course came from its ability to create an atmosphere where socioeconomic diversity was undeniably visible and welcome.

This class, however, falls short in its potential; FGLI students are unfortunately all too familiar with the structural barriers faced not only when applying to elite universities, but also when attending them. These obstacles are present daily in the cost of going out, the financial stress of purchasing books and the unrelenting onslaught of “How have you never been to …?”

It is not the duty of FGLI students to adapt to the dominant culture of wealth at Georgetown. It is the duty of Georgetown to implore all its students to be cognizant of the harsh reality of economic inequality.

In a nation where 44% of millionaires identify as “middle class,” the privilege of wealth is often a bubble. This bubble blinds upper class Americans to the privilege associated with socioeconomic status: cultural capital. Defined as “institutionalized widely shared, high status cultural signals … used for social and cultural exclusion,” elite cultural capital manifests itself in knowledge of office hours, campus resources and the unspoken mechanisms of higher education. Without the privilege of elite college preparatory resources, FGLI students often lack awareness of the need to use office hours to cultivate relationships with professors and the career preparation that universities offer. This effective denial of resources will continue, so long as the holders of cultural capital remain blind to their privilege.

By expanding access to the MHC course to all students, Georgetown can begin to deconstruct the class bubble. Instead of only teaching FGLI students how to adjust to a campus with very little socioeconomic diversity, Georgetown can make the realities of socioeconomic diversity known to all of its students. This would work to create a more prepared, mindful student body. Georgetown prides itself on molding future public servants, but in order to create better leaders, this education must holistically encompass America’s diversity.

Georgetown should transform the MHC course into a 3-credit class that fulfills the university’s engaging diversity requirement. Georgetown mandates that students take two courses with the engaging diversity attribute to ensure that students recognize “the plurality of human experience,” yet out of the 54 courses offered for the Spring 2023 semester that satisfy this requirement, very few mention class, socioeconomic diversity or economic inequality. Georgetown has failed to meaningfully address the reality of class for far too long, and it is imperative that its curriculum acknowledges socioeconomic diversity as a meaningful component of the human experience.

The MHC course should continue to be offered as it stands for FGLI students, as its community-building atmosphere provides refuge from the often overwhelming culture of privilege on the Hilltop. The course’s aims, however, should be expanded to educate students of all backgrounds.

First-Generation Low Income students have a home in the GSP at Georgetown, but this is not enough. The university has a responsibility to make its students well-rounded citizens, and this includes instruction on the privilege of wealth.

Madison Fox-Moore is a first-year student in the College.