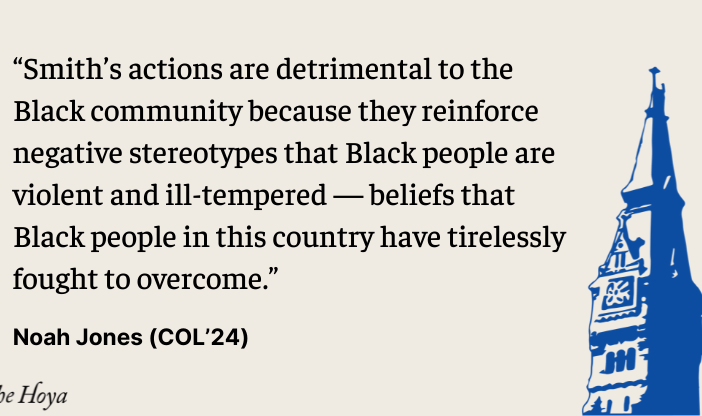 The Oscars are known for esteem and grandeur, as actors, actresses and filmmakers are awarded Hollywood’s highest honors. Yet this year’s ceremony was tarnished by the unbecoming actions of renowned actor Will Smith.

While presenting an award, Chris Rock made a joke about Jada Pinkett Smith, Smith’s wife, and her lack of hair, exclaiming he couldn’t wait to see her star in “G.I. Jane 2.” He was referencing her alopecia, a condition that causes severe hair loss.

Will Smith initially laughed, but it quickly became clear that he was offended by the joke when he got up and slapped Rock in the face.

This single act risks justifying violence and insult in the entertainment industry, but its implications will likely be much greater. Smith’s actions are detrimental to the Black community because they reinforce negative stereotypes that Black people are violent and ill-tempered — beliefs that Black people in this country have tirelessly fought to overcome.

The backlash was swift: Smith was banned from attending the Oscars for 10 years. He has faced widespread condemnation for his irrationality, violence and toxic masculinity.

Kareem Abdul-Jabbar, a Hall of Fame basketball player, was one of many celebrities to vehemently speak out against Smith’s actions. In a blog post titled “Will Smith Did a Bad, Bad Thing,” Abdul-Jabbar talks about how damaging Will Smith’s slap was to the Black community, as he says, “One of the main talking points from those supporting the systemic racism in America is characterizing Blacks as more prone to violence and less able to control their emotions.” In Abdul-Jabbar’s view, “Smith just gave comfort to the enemy by providing them with the perfect optics they were dreaming of.”

Those who defend and continue to promote systemic racism in the United States often characterize Black people as more predisposed to using violence and experiencing greater emotional instability than white people. By assaulting someone, Smith has given comfort to the enemy, reaffirming their preconceived notions about Black people.

This incident will prompt many to continue to marginalize and suppress Black people as well as grant people misplaced authority to continue perpetuating racism.

As a Black male student at a predominately white institution, this incident and the debate surrounding it have been particularly poignant for me. I am constantly fighting against the shackles of stereotypes that are inherently linked to my race. People look at me and assume I will have a volatile reaction to a negative situation.

I regularly endure classmates’ confused expressions that implicitly question my qualifications for being a Georgetown University student. I walk into stores on M Street in Georgetown, and store employees automatically follow me. By slapping Chris Rock, Smith played into those stereotypes.

These harmful stereotypes have potentially life-threatening implications. A study conducted by the Kaiser Family Foundation found that 71% of Black Americans say they have experienced some form of racial discrimination or mistreatment during their lifetimes, and 48% say that at one point they felt their life was in danger because of their race.

Many of these instances stem from implicit biases, which characterize Black people as more dangerous and violent simply because of the color of their skin. These biases have been perpetuated by the media, hate groups and those with racist ideologies.

Although this incident occurred March 27, the impact of the slap is just as palpable today as it was on the day of the event.

His actions on a night that should have been celebrated — Smith won the award for “Best Actor” shortly after the slap — instead helped to perpetuate the stereotypes that Black people in this country face. By resorting to violence, Smith also set a poor example for Black men and women who look up to him.

What makes the whole situation worse was that Smith tried to justify his actions by claiming to be a superhero-like protector. Now, young Black girls and especially Black boys are much more likely to follow in his footsteps. Instead of being an inspiration, with that slap, Smith became an embarrassment and his actions contributed to the perpetuation of racist stereyoptyes that continue to plague Black people to this day.

Noah Jones is a sophomore in the College.