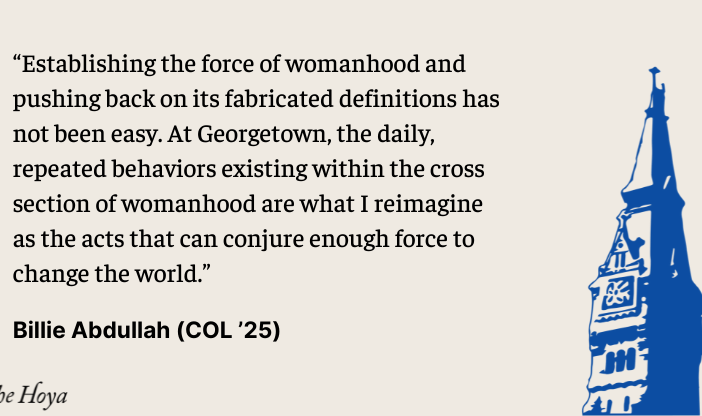 This past semester, I’ve realized that womanhood is a force to be reckoned with. And when I say womanhood I don’t mean a singular identity: in my opinion, it is not. It is a plethora of identities. Womanhood is a watering hole where individuals meet, gather and foster knowledge, where there is a mutual understanding of a societal inferiority that is implicitly encountered on a daily basis. The collective energy emanating from the strength of this community creates this aforementioned force.

Why is this a force to be reckoned with? I find myself reevaluating this question every passing moment as someone who is continually emitting energy. At times, even though I feel that the force deserves and demands to be reckoned with, the response I receive is not always reflective of this. Dismissal, disregard and discarding seem to be a commonalities experienced amongst my fellow feminists, or anyone who gathers at the watering hole of womanhood.

Defeat is a constant when we are aiming for an utopic future. Many of us give up when there is push back. And rightfully so. There is only so much energy we can emit without receiving anything in return. Many of us stop listening or engaging whenever the energy we emit is not reciprocated.

Transforming what can feel like useless energy at times is difficult. During her talk at Southern Illinois University Carbondale in 2014, author and activist Angela Davis helped me conceptualize the idea of energy you don’t always necessarily feel you have. “You have to act as if it were possible to radically transform the world. And you have to do it all the time,” she suggests.

I interpret that to imagine the force as something that can be reckoned with, even when you don’t necessarily have the energy yourself.

Establishing the force of womanhood and pushing back on its fabricated definitions has not been easy. At Georgetown, the daily, repeated behaviors existing within the cross section of womanhood are what I reimagine as the acts that can conjure enough force to change the world. Reimagining things as simple as walking back from a class in Walsh or Car Barn with a classmate to my dorm as actions that have the power to tangibly affect the quality of my day, week or month. Or going to an event, observing, participating or even facilitating and immediately feeling the overwhelming amount of forces combined within a room. You may be asking yourself while reading, “how can you feel this energy?” It’s something I still can’t exactly put my finger on, but I feel as though the watering hole metaphor is something that easily helps me articulate the unspoken understanding. It can be a shared simple snap, or a smile. It can be a sigh, a scoff, a step, a side eye or a stop in the middle of my sentence.

I am thankful for these simple moments. They remind me that forces, although sometimes not received with equal and opposite reactions, can have a seismic effect when combined. It comes and goes. Like a wave. Or ripple in a puddle … or a watering hole.

Returning to the watering hole is something I decide to do everyday at Georgetown, especially as someone who resonates with the shared narrative of a young black woman. And it is something I ask the community of womanhood here at Georgetown to build upon. It can be as simple as walking with a classmate you have shared a commonality with during a class discussion.

Imagining the strength of individual energies when simply placed together is what matters. Not just because you both come together at the watering hole of womanhood, but because the reckoning demands it. And it is a force that demands itself to be felt.

Billie Abdullah is a first-year in the College.