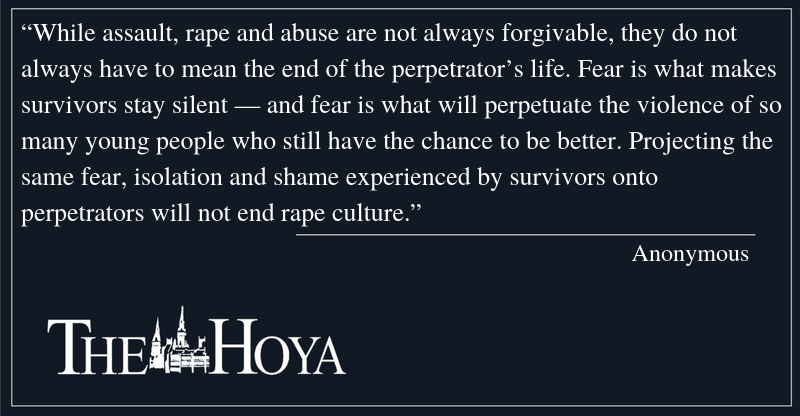 This article discusses sexual assault. Please refer to the end of the article for resources on and off campus.

I am a Georgetown University student and a survivor of multiple instances of sexual assault. When I see Christine Blasey Ford telling her story, I am not proud; I am not empowered — I am heartbroken.

Heartbroken that this woman, who could be me in 20 years — a woman with a career, a family, a life that seems happy and full — is still haunted by those moments of weakness, shame and fear that I had hoped would pass.

What Supreme Court nominee Brett Kavanaugh is accused of doing to her is terrible. It is wrong to laugh at someone’s pain, to control someone just because you can, to press your hand over someone’s mouth and make them fear for their life. Using someone’s body to make yourself feel powerful is an act that forever taints your humanity.

I agree with those who criticize our justice system, which too often allows young men to get away with assault and then grow to write our laws. I agree that girls deserve better than just being told to be careful. I agree that it is unfair that I have to get out of bed in the middle of the night to check that my door is locked.

I want the people who have hurt me to understand that I will carry the weight of what has happened to me to job interviews, to my wedding, to my children’s weddings and probably to my grave. I want them to promise to never, ever hurt someone again in the same way.

Campuses, cable channels and kitchen tables are trying to figure out how to create safe spaces for survivors of assault — endless conversations about how to encourage those who have been hurt to come forward, to end cycles of abuse, to protect future generations. There are also some brave, wonderful men stepping forward as allies, standing with people who have been abused or assaulted, and publicly condemning the culture that makes this experience so commonplace.

But what I want — more than statements of support or a place to talk about my experiences — is a safe space for those who do not understand why Kavanaugh’s actions were wrong. For those men who see nothing more than a little fun in shoving women into bedrooms, backseats and alleyways across the country and around the world. I want those individuals to have a space to question what the tide of public opinion is saying without the fear of persecution, because fear is the fastest way to stop conversation.

These spaces must be created with the same care with which we facilitate conversation among survivors. They should respect the anonymity and uncertainty of those struggling to understand the consequences of their behavior, while also being sure to provide clear messaging about the damage caused by assault.

I understand that there is a limit to this thinking. Not all offenders deserve freedom; not all people want to change and grow. But, just as we want the world to see us as more than the objects and victims they turned us into, we must look past the ugliness we see in the actions of these individuals and try to find a common humanity, a common respect for one another, and a common goal to become people outside of our trauma and our mistakes.

But as I scroll through Facebook and see the anger and rage of my brilliant, powerful friends of all genders, I cannot help but fear what this attitude means for our future. I believe that the survivors of these assaults will prevail as our society continues to progress. But for the sake of all those who could be spared my fate, I am not willing to write off every young man as a lost cause.

I want people to come forward and say, “Yes, I have taken a drunk girl home with me,” “Yes, I have leaked private pictures,” or “Yes, I have kept going when she told me stop.” And I want those people to have a space where others are waiting to explain — to teach and inform them of the consequences of their actions. Because while assault, rape and abuse are not always forgivable, they do not always have to mean the end of the perpetrator’s life. Fear is what makes survivors stay silent — and fear is what will perpetuate the violence of so many young people who still have the chance to be better.

Projecting the same fear, isolation and shame experienced by survivors onto perpetrators will not end rape culture. Instead, we must explain — not to the allies, not to those great men we all know who would never hurt us, but to the ones who need to hear exactly what their “harmless” actions mean. We do not need more places for the already vocal allies to express their support. Rather, we need a way to get perpetrators talking about why they behave the way they do.

If I were a man accustomed to hurting women, the current tone of conversation about sexual assault would not make me want to learn and change. Ford’s story and the media storm surrounding Kavanaugh and others in his position would only force me to be more careful and more deeply entrenched in my behavior.

We, the victims, know better than anyone else that our past does not — and should not — define our future.

Resources: On-campus resources include Health Education Services (202-687-8949) and Counseling and Psychiatric Services (202-687-7080); additional off-campus resources include the D.C. Rape Crisis Center (202-333-7273) and the D.C. Forensic Nurse Examiner Washington Hospital Center (844-443-5732). If you or anyone you know would like to receive a sexual assault forensic examination or other medical care — including emergency contraception — call the Network for Victim Recovery of D.C. at 202-742-1727.  To report sexual misconduct, you can contact Georgetown’s interim Title IX coordinator at 202-687-9183 or file an online report here. Emergency contraception is available at the CVS located at 1403 Wisconsin Ave NW and through H*yas for Choice. For more information, visit sexualassault.georgetown.edu.

The writer is a student at Georgetown University.

The Hoya is taking the rare step of publishing an anonymous Viewpoint. We have done so at the request of the author, a survivor of sexual assault whose identity is known to us and whose safety could be jeopardized by its disclosure. We believe publishing this Viewpoint anonymously is the only way to deliver an important perspective to the Georgetown community. We invite you to submit a question about the Viewpoint or our vetting process by contacting the Opinion Editor at [email protected]