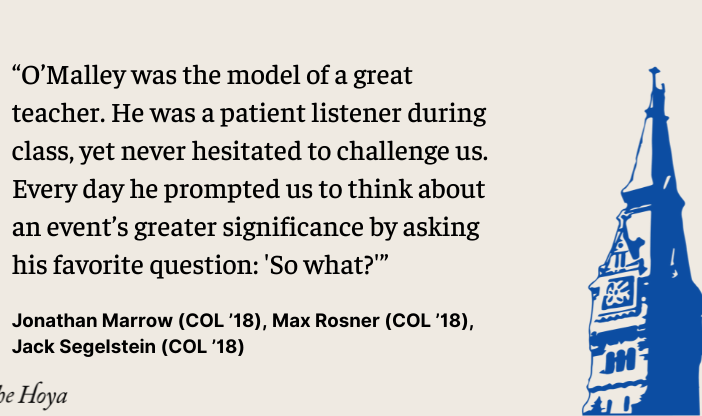 Every so often in a student’s life, a teacher comes along who is so vibrant, so engaging and so empathetic that they build your love for learning in new and unforgettable ways.

Fr. John W. O’Malley, S.J., who passed away in Baltimore on Sunday, Sept. 11, at the age of 95, was one such teacher. A long-tenured priest, historian and professor who published dozens of books on the religious culture of Early Modern Europe, O’Malley was among the greatest religious historians of the 20th and 21st centuries. His writing won him numerous lifetime-achievement awards, honorary doctorates and book prizes, and, influenced major public voices like Fr. James Martin, S.J.

Behind this impressive resume was a loving and holy man, whose passion for teaching captivated his students. It is teachers like him that Georgetown needs to do more to recruit and foster.

Our junior year at Georgetown, the three of us took O’Malley’s legendary course, “Two Councils: Trent and Vatican II.” Over the course of one semester, he placed the two titular events, which occurred four centuries apart, in the context of a fascinating conversation about theology, church governance, rhetoric and reform.

The debates that occurred in the two councils came alive for us in our small classroom in the Walsh Building, as O’Malley continually asked us to relate history to the present. The questions we addressed (how do large institutions like the Catholic Church deal with change? How do cultural shifts affect religious belief and practice?), were timeless, yet grounded in the histories we studied.

O’Malley was the model of a great teacher. He was a patient listener during class, yet never hesitated to challenge us. Every day he prompted us to think about an event’s greater significance by asking his favorite question: “So what?”

He was generous with his time, as evidenced by teaching us at the age of 90, and prioritized getting to know his students. Prayer was a constant for him. He had a child-like smile. He was deeply human, but also felt that his life was about fulfilling something greater.

The three of us quickly became close with O’Malley, as we delighted in the conversation, humor and advice he offered. We often joined him at Wolfington Hall, where he hosted dinners, said Mass and introduced us to his brother Jesuits. He wanted to hear about our lives as much as we wanted to hear about his. We once joined him for the opera at the Kennedy Center, where his love for the art form made the experience ever more special.

After we graduated, O’Malley remained a part of our lives and continued to advise us with his typical warmth and humor. When one of us was struggling at the start of our career, O’Malley, who loved Italian food, remarked: “the Italians have a phrase: ‘l’appetito vien mangiando’ — sometimes the appetite only comes with the eating!” He never ceased to joke about his passion for pursuing his ideas, once telling us: “I wrote three books of history about three councils, and now I’m writing another book to tell people what I said in those books, for those who weren’t listening!”

An exemplar of interreligious understanding, he cherished the conversations that his books spurred with those of other faiths. This was no different from the way he dealt with students. One of us is Jewish, and O’Malley built his faith and love of religious history just as strongly.

On his Georgetown Jesuit Community profile, O’Malley wrote that the nicest thing anyone ever called him was “the archenemy of the superfluous word.” His writing, which made history accessible without sacrificing detail, was never inflated or pretentious. And neither were his actions. He did not indulge in his accomplishments or see professional success as a measure of a life well lived. His soul was humble, his personality warm and kind. He liked to joke about many things, but was never sarcastic about God’s love and presence in our lives.

Georgetown, the Jesuits, the Church and the Academy have all suffered a loss with O’Malley’s passing. But his writings will continue to inform, and his memory will bless his former students and colleagues. We would like to see the university make an effort to find the great teachers — not merely subject-matter experts and researchers — that can change students’ lives.

For the three of us, O’Malley will always be the devoted, elderly Jesuit, who wrapped up a long, late class of theological debate with the smiling, playful words, “ok, nighty night!” We are confident that he is looking down from above, willing us, and all of his many students, to live lives of joy and passion.

Jonathan Marrow, Max Rosner, and Jack Segelstein graduated from the College in 2018.