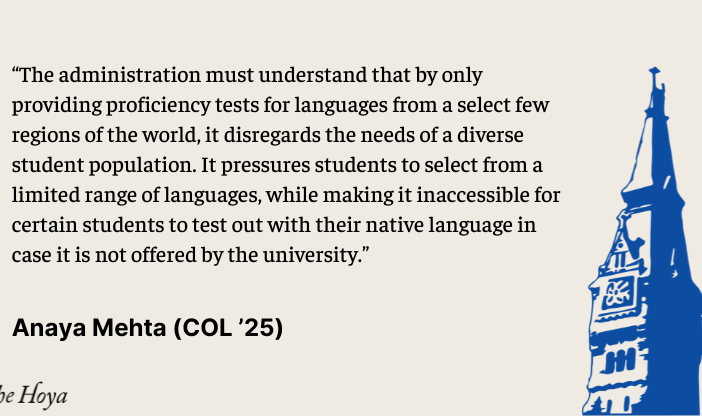 Just to fulfill my requirements for graduation, I had to pay over $200 to show I was proficient in a language I’ve been speaking my entire life.

The administration must understand that by only providing proficiency tests for languages from a select few regions of the world, it disregards the needs of a diverse student population. It pressures students to select from a limited range of languages, while making it inaccessible for certain students to test out with their native language in case it is not offered by the university. Ensuring that the university has free proficiency tests for all students, regardless of the languages they speak, is an important step toward acknowledging campus diversity.

As a first-year student, I passed my proficiency exam in Hindi given that I grew up in India, and am a native speaker who has spoken and written the language my entire life. When I approached my advisory dean about testing out of the language requirement with Hindi, they mentioned that Georgetown did not have a proficiency test for Hindi, and I would have to take the ACTFL Written and Oral Proficiency Test for $273, an exorbitant and appalling cost for any student to prove proficiency in a language they had grown up speaking.

For students in the College and the MSB’s international business major, the graduation requirement is proficiency at the intermediate level, while students in the SFS, including those pursuing the BSBGA dual degree with the MSB, are required to reach intermediate high to advanced mid-level proficiency. The ability to test out of the foreign language requirement early allows students to take more courses toward their major or even add another major or minor.

Georgetown attaches a clause at the end of its foreign language proficiency test policy to make financial accommodations for students. In an introduction to registration Canvas course, the university mentions that students “should contact their financial aid counselor” if the exam presents financial difficulties.

While I understand that the university does not have the capacity to provide in-house proficiency tests for over 7,000 languages, I urge the administration to sponsor external proficiency tests for those students who wish to take them in a language not currently offered by the university. Guaranteeing equitable access to these exams would take Georgetown one step closer to being a genuine “community in diversity” where every student is able to fulfill the language requirement with any language of their choice at no cost.

Anaya Mehta is a sophomore in the College.