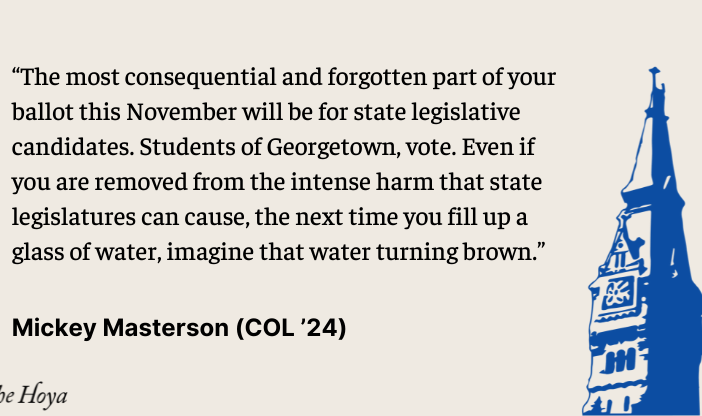 From July 28 to Sept. 14, Jackson, Mississippi’s roughly 150,000 residents lacked access to clean water. The government failed in providing one of its most basic and crucial services to its citizens.

For a city so long neglected, Jackson needed a lifeline — and nearly got one. The American Rescue Plan Act of 2021 provided a massive influx of federal dollars to local and state governments across the country, as a part of efforts to restart the economy. The bill was not just an attempt to recover from the COVID-19 pandemic, but was also an opportunity for governments to start fresh with a clean slate. Although Jackson received money directly from the federal government, it was not enough to repair its water infrastructure.

In order to prevent a crisis, Jackson needed the State of Mississippi to pitch in. Despite having several billion dollars at its disposal to aid the capital city, the state legislature instead created more barriers to funding access. The legislature singled out Jackson, alone among other Mississippi cities, to jump through bureaucratic hoops.

I would like to say that the state legislature was simply being overly cautious or fastidious, but the fact that no other city had to clear the same hurdles as Jackson leads me towards a more cynical explanation. In a city that is 83% Black and 85% Democratic, the white Republican state legislators seemingly targeted citizens who did not vote for them or do not look like them.

Some may point to President Biden’s domestic legislation and federal action as a remedy to this problem, specifically the roughly a quarter-of-a-trillion dollars for environmental-related projects raised by the Bipartisan Infrastructure Law and the Inflation Reduction Act.

The Jackson crisis proves that we are past the point of GOP state legislatures feeling apathy towards its citizens. Antipathy is now their modus operandi.

Think about dangerous gun laws, total abortion bans, anti-trans bills, restrictions on free speech, and attacks on voting rights. Even if you live in a blue state, these issues affect you. Think about the fact that state legislatures are the ones who draw Congressional maps through redistricting. Think about the alarming number of state legislative candidates, who could and would work to overturn the 2024 presidential election. The most consequential and forgotten part of your ballot this November will be for state legislative candidates. Students of Georgetown, vote. Even if you are removed from the intense harm that state legislatures can cause, the next time you fill up a glass of water, imagine that water turning brown.

Mickey Masterson is a junior in the College.