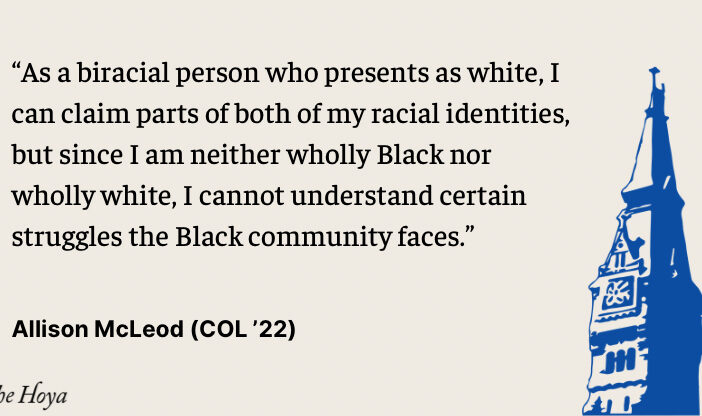 CW: This article directly references racism and violence. Please refer to the end of the article for on- and off-campus resources.

I’m half African American on my father’s side, but I was born with physical features greatly resembling my white mother. Throughout my life, I’ve heard the question, “So, what are you?” countless times. Sometimes it’s a mutual getting-to-know-you attempt, but it has also been posed in a “no offense” and “you don’t have to answer” manner, where I fall under scrutiny because my race is not as obvious as others’. Either way, it’s a question I find myself having a hard time answering because part of me is unsure if I can claim the identity that my appearance conveys.

In this country, being Black is more than genetic ancestry; being a Black American means belonging to a community full of deep culture and history — and it means facing ongoing racism and bias. Therefore, I struggle with claiming my Black identity because I do not look Black. As a biracial person who presents as white, I can claim parts of both of my racial identities, but since I am neither wholly Black nor wholly white, I cannot understand certain struggles the Black community faces. As a result, I cannot identify as Black in the same way that others can because I benefit from white privilege and its protection from many forms of racism.

The seemingly unending string of recent incidents of police brutality and murder only further exemplifies the fact that police kill up to six times more Black people than white people in the United States. Police are more likely to stop Black and Hispanic Americans on the road, and after they are stopped, they are more likely to be searched. My father, my uncles and my cousins live with this fear of being racially targeted, but I do not. I will most likely not have to contend with instances of racism like my father has. For instance, when his college landlord did not like the idea of a Black person living in his building, he exploded with rage toward my father, screaming “Goddamn, n******, you give them an inch and they take a mile.” My dad sued and won the lawsuit, but nothing erases the intense embarrassment he felt after being harassed in front of his college friends, a recurring sick feeling he gets when his race is weaponized against him.

I have never had my race used against me in this way, and I worry about it less than my other family members do. This is part of my white privilege. Acknowledging white privilege does not mean complying with the systemic racism that allows it to exist — it means I am understanding how my life may be easier because of my appearance, even though I am genetically half Black.

In addition to benefiting from white privilege, people like me reap certain benefits associated with being multiracial. I am able to participate in Georgetown’s affirmative action admissions process; therefore, I cannot deny the possibility that I had an advantage getting accepted into college because of my race. In my case, I could argue that I deserve affirmative action benefits because I descend from a line of Black Americans who faced discrimination in this country, and I, as a member of that community, should be compensated for past disadvantages. In the same sense, my white ancestry’s role in oppression is the reason affirmative action policies exist. The conflicting aspects of my identity complicate arguments for or against my right to receive affirmative action.

Because of the discrimination I have avoided and the benefits I have received, I am understanding my racial identity in a unique way, claiming my Black identity while remaining conscious of my privilege. My appearance causes my race to belong to me in a different way than it does to others in the Black community.

I face racial confusion, even from family members, such as when my uncle who told me he was glad my dad didn’t try to give me “one of those fake Black names.” Or when I straightened my curly hair every day in middle school because all the other girls had straight hair. In a society where race is too prominent not to be seen, I’ve learned to embrace those differences wholeheartedly. With more experience and reflection, the question of “what are you?” will hopefully become easier to answer.

Alison McLeod is a sophomore in the College.