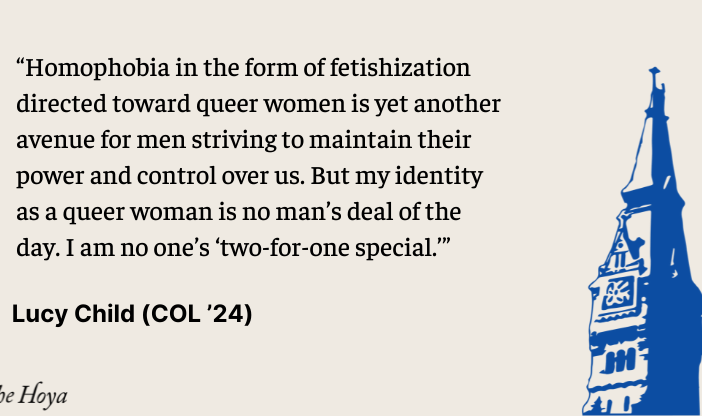 “I’m all about that two-for-one special.”

Dumbfounded by the confidence with which he had uttered these words, I was almost certain that I had misheard him.

He repeated: “I’m all about that two-for-one special.”

Nope — I heard him correctly the first time. I guess I wasn’t prepared for his uniquely sexual, yet homophobic comment.

I had just met this stranger in the middle of a party. He asked a friend of mine who her “cute friend with the curly hair” was. Initially flattered, I laughed and gave him my attention. When he asked if I was single, I hesitated. Not because I was interested in him or had any intention of lying about my relationship status, but because I hadn’t gauged whether or not it’d be safe to out myself as a queer woman to this stranger. “He seems nice enough,” I remember thinking to myself. So I told him the truth and said that my girlfriend had just gone to the bathroom.

He hesitated and I felt my stomach tie into knots as I waited for what I was hoping would be a casual acceptance of my rejections.

Instead, he referred to my girlfriend and me as a “two-for-one special” available for him to take advantage of. He said it with a grin — almost as though he saw it as a charming gesture.

I don’t remember what I did next, I just remember feeling confused. I felt insulted but wasn’t sure if I was allowed to be mad about the offhand comment. The remark seemed homophobic, but it wasn’t like anything I had heard before. I hadn’t been threatened or called any sort of gay slur. Instead, I felt the same way I do when I’m catcalled on the street: humiliated.

This was the first time I realized that queer women and queer men experience homophobia differently. I can unequivocally confirm that queer women are no exception to the patriarchal system our society has cultivated. For queer women, homophobia is underpinned by sexism and more specifically, hypersexualization.

While physical and sexual violence against women are frequently cited as the most obvious and egregious displays of sexism, I’ve found that there are also much more subtle forms of harassment that I and many other women encounter in our daily lives. Whether it’s having my body commented on by random men passing by on the street or being told to smile more because it would make me prettier, these socially acceptable forms of objectification are ultimately intended to strip me of any power and autonomy. They reinforce antiquated conceptions of womanhood within our patriarchal society, and they make me feel ashamed of my own femininity. Interestingly, though, I’ve found that these are the same intended effects of much of the homophobia I’ve experienced as a queer woman.

Queer women are fetishized and hypersexualized by straight and cisgender men in an extraordinarily similar way to how any woman is objectified by the same perpetrators. Don’t get me wrong — there is certainly an added layer of bigotry that is unique to the discrimination faced by queer women compared to straight women. However, I’ve found that even homophobia experienced by queer women is compounded by those universal standards of sexism that work to make women feel less comfortable and safe in spaces that continue to be male-dominated.

As a queer person, the unfortunate truth is that I’m no longer fazed by the gay slurs I’ve been called or by the glances of disdain I receive when holding my partner’s hand in public. As a queer woman, though, I find myself still saddened and angered by the overtly sexualized commentary I receive, often from complete strangers.

I’ve only just begun to understand the intersection of my identity as both a woman and a queer person. The clearly negative implications of this intersection as it relates to bigotry do not only affect me, but rather all women, because any space in which hypersexualization is allowed only perpetuates the acceptance of these subtler forms of sexism.

Homophobia in the form of fetishization directed toward queer women is yet another avenue for men striving to maintain their power and control over us. But my identity as a queer woman is no man’s deal of the day. I am no one’s “two-for-one special.”

Lucy Child is a sophomore in the College.