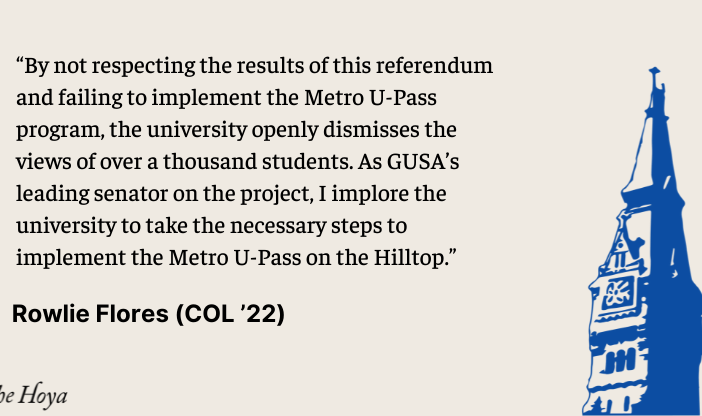 If implemented, the program would automatically charge all full-time undergraduate students $127 per semester for unlimited rides in WMATA’s train and bus services in the region.

The university’s failure to act is indicative of a long history of the administration’s disconnect with the student body. For instance, the school has yet to act on the GU272 referendum, which the student body also fervently supported.

In our research to push for the referendum, the authors of the bill — including former President Nile Blass (COL ’22), Senators Dominic Gordon (SFS ’23), Leo Rassieur (COL ’22) and myself — looked at American University’s participation in the Metro U-Pass program and found that of 10,000 AU students enrolled in the program, approximately 9,000 students used their U-Pass Smartrip cards in 2017 alone.

This statistic shows that the program is not just another added fee to our cost of attendance; rather, it’s a program that is utilized by all students, regardless of their socioeconomic status or background.

George Washington University recently joined AU as the second university in Washington, D.C., to enroll in the program. In December 2021, GW pushed through a trial period to collect data on student usage of the program and then fully implemented the program a month later. Satellite campuses of other universities have also utilized the program.

Although GUSA has provided various proposals to make transportation equitable on campus, such as a transportation stipend program, there has been little movement on the university’s part despite being given opportunities to do so.

In a March 31 article in The Hoya, the university cites the Capital Bikeshare Universities Program and free transportation services via the Georgetown University Transportation Shuttles (GUTS) as sufficient alternatives to the Metro U-Pass. However, these transportation options are simply not enough.

For instance, most GUTS buses do not operate on weekends, when students usually plan to get out of the Georgetown area to explore the city and attend to their personal matters.

There is a common misconception among opponents of the Metro U-Pass that Georgetown students will not benefit from the Metro U-Pass program because we don’t have a Metrorail station, but that is not true.

Georgetown repeatedly uses its location in the capital to market the school to prospective students and donors. Nevertheless, it has done very little to help students, especially financially disadvantaged students, get around the city to explore, pursue opportunities and get out of the Georgetown bubble.

The Metro U-Pass started as a GUSA initiative, but is now supported by many in the student body, regardless of whether they voted in the referendum. As one of the authors of the referendum, I find it necessary to hold the university accountable to listen to student perspectives and act on them. This led me to introduce a resolution that reaffirmed the 2021 referendum vote and emphasized the university’s inaction on an overwhelmingly popular proposal.

However, we must remain clear that this resolution is not the end of GUSA’s efforts. GUSA must continue to pressure the university to implement the program even after a referendum vote or having peers sign a petition. Effective policies can only happen when the Georgetown community is engaged at every step of the process.

Rowlie Flores is a senior in the College.