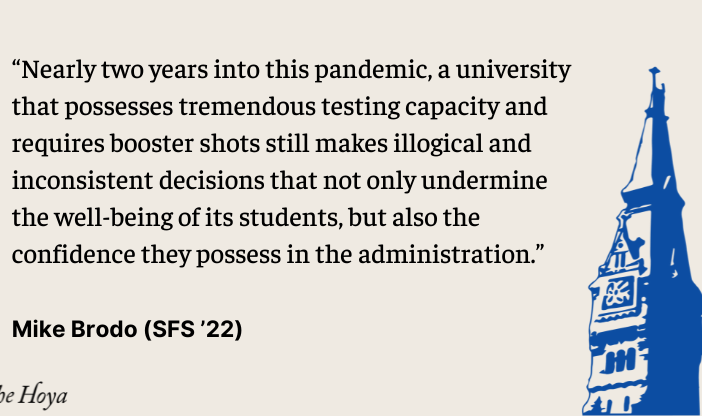 In a Dec. 29 announcement, Georgetown University released updated COVID-19 policies pertaining to the beginning of the spring 2022 semester. To my shock — but not my dismay — undergraduate residential students would be allowed to return to campus on the regularly anticipated date of Jan. 11. Yet despite allowing for an on-time return to campus, the administration determined that in-person classes would not begin until Jan. 31.

Given that my time as a second-semester senior taking only two classes would primarily be spent outside of the classroom, the announcement about virtual classes only marginally affected me. Yet I was still upset, and I couldn’t exactly pinpoint why.

Maybe it was because I knew that any more time spent in a virtual learning environment, especially for those enrolled full time, would resurrect previous challenges of zoom fatigue and diminished learning outcomes. Maybe it was because I realized that one of the nation’s most expensive universities continually fails to provide adequate wireless bandwidth for its students — so slow that the bandwidth reached the point of dysfunction, even while classes were in person last semester.

However, I was most frustrated by the fact that in addition to the university’s COVID-19 policies being hypocritical, they also fail to sustain the physical and mental well-being of our community members. Nearly two years into this pandemic, a university that possesses tremendous testing capacity and requires booster shots still makes illogical and inconsistent decisions that not only undermine the well-being of its students, but also the confidence they possess in the administration.

But, before questioning the logic behind Georgetown’s new COVID-19 policies and providing reasonable alternatives, let me first clarify that I am not attempting to downplay the severity of this pandemic nor the importance of public health measures.

Let’s take a deeper look at the range of new COVID-19 policies put in place.

All university community members are required to participate in arrival testing upon their return to campus. In addition, despite some rare exceptions, Georgetown community members were mandated to receive a booster dose by Jan. 21.

Given these two mandates, there was not sufficient reason to postpone in-person learning until Jan. 31 if students were simultaneously allowed back on campus.

Though it may not be empirically provable, I am quite confident that the majority of campus COVID-19 transmission is not coming from classrooms, where students sit feet away from each other while masked.

The packed indoor parties and Washington, D.C. bars, where participating students are crammed together, often maskless, despite the citywide mandate, are the more probable culprits. As a result, by prohibiting an immediate return to in-person learning, the university administration isn’t doing much to reduce campus transmission rates since students can legally frequent off-campus establishments that lack the level of masking implemented in classrooms.

Let’s consider some policies, in addition to arrival testing and the booster mandate — which are already effective on their own — that actually make sense for the Georgetown community’s health and well-being.

Third, the university should eliminate the restriction on consuming beverages in public spaces, most notably the library. Forbidding students — who often spend hours at a time in the library — from sipping water in the name of public health is a gross and unnecessary overreaction that is not supported by science. According to the CDC, sipping water for a few seconds does not pose a risk of COVID-19 transmission, especially when others are masked and physically distanced. I understand that allowing the consumption of beverages can be a slippery slope for students to take their masks off for sustained periods of time, but banning water is a leap too far. If the university so desires, it can increase the number of “mask police” in public spaces, ensuring that students only pull their masks up or down for seconds at a time to drink their water.

Fourth, the university should expand the operating hours of Yates Field House and Kehoe Field, while putting in place reasonable restrictions. In a time when physical fitness is supremely important, limiting opportunities for students to exercise in the name of public health is extremely misguided.

Lastly, instead of making ineffective, inconsistent and harmful decisions to prove worthiness in the new world of “public health” erotica, Georgetown should implement policies that actually improve the physical and mental well-being of the campus community.

For example, while the university is applying all sorts of ridiculous policies that harm the physical and mental health of its students, it simultaneously allowed thousands of students to pack into Capital One Arena for a Jan. 13 men’s basketball game against Butler — and even promoted attending the game by giving student season ticket holders two additional tickets! Hypocrisy like this undermines trust and confidence in Georgetown’s COVID-19 protocols, which are supposedly rooted in public health considerations.

What explains these inconsistencies? Greed? Incompetence? The desire to say that one did something while not actually taking logical steps to achieve mutually beneficial outcomes? It’s not my goal to uncover such motivations, and I am not implying any sort of unfounded conspiracy that suggests any of those motivations are true.

But, what I can tell you is that Georgetown students like myself are confused and frustrated. While many students recognize that some COVID-19 restrictions on campus are valid and necessary, some of these policies have gone too far. By imposing some illogical policies while failing to implement others that would actually make sense, the university has succeeded only in revealing its incompetence.

Packed arena? Encouraged! Water in the library? How dare you!

Mike Brodo is a senior in the School of Foreign Service.