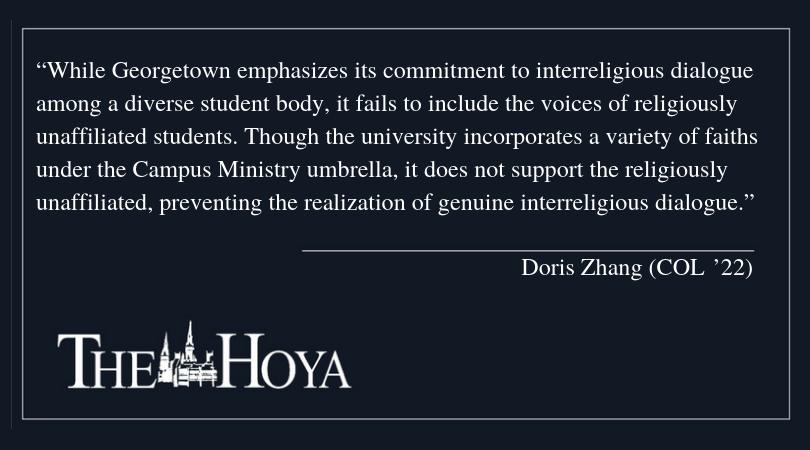 When I sat in the Jesuit Values Panel during New Student Orientation, I felt a disconnect. As each of the Georgetown chaplains spoke about their own faith traditions, I was left wondering why no one represented my voice on stage.

I was raised in a secular household and am religiously unaffiliated, part of a spectrum that does not subscribe to any religious tradition. Because of the university’s Catholic affiliation, I was hesitant to commit to Georgetown but reassured by its publicized commitment to openness and diversity in interreligious dialogue.

While Georgetown emphasizes its commitment to interreligious dialogue among a diverse student body, it fails to incorporate the voices of religiously unaffiliated students.

Though the university incorporates a variety of faiths under the Campus Ministry umbrella, it does not support the religiously unaffiliated, preventing the realization of genuine interreligious dialogue. If Georgetown is truly dedicated to promoting this dialogue, it should expand the conversation to include students who are atheist, agnostic or otherwise religiously unaffiliated.

The number of religiously unaffiliated college students in America is on the rise. In 1986, 10 percent of college students identified as unaffiliated; by 2016, this number increased to 31 percent. Pursuant to the university’s goal of creating future leaders, it must educate these leaders about a group that now accounts for more than one-fifth of the American population.

Currently, Campus Ministry “welcomes and supports students who identify as agnostic, atheist, humanist or simply ‘none of the above,’” according to its website. However, the ministry has not sufficiently dedicated resources to retreats and events for this group.

Because of the absence of a designated platform to support unaffiliated students, this minority lacks a space on campus to talk about their shared identity without risk of encountering judgement or stigma that can be present in other spaces.

Georgetown can use existing resources within Campus Ministry to support platforms of discussion that incorporate a nontheistic perspective. These platforms could support events dedicated to the exploration of the wide range of perspectives that nontheism encompasses.

For example, Georgetown should invite prominent figures within the nontheistic community for larger lecture events that explore topics such as morality or current events through a distinctive atheist or agnostic lens.

Simultaneously, the university could create discussion events focused on the topic of nontheism. These more intimate events would exemplify the immense diversity among religiously unaffiliated students and add much more nuance to students’ understanding of their unaffiliated peers beyond the simple labelling of “atheist” or “agnostic.” To facilitate these efforts, Georgetown could consider hiring a humanist or secular chaplain to sustain the dialogue.

By including more nontheistic voices on campus, Georgetown can better educate its students to combat a nationwide bias against the nonreligious. According to a 2017 study, people from more religious countries, including the United States, have widespread bias against atheists. This bias is rooted in misconceptions about atheists’ moral integrity. By creating more conversation and better representation of the unaffiliated student body, Georgetown can play a part in combating prejudice in the current national narrative.

If Georgetown wants to continue to be a leader in interreligious dialogue, it must start supporting its nonreligious students by incorporating a nontheistic perspective into the conversation.

Doris Zhang is a freshman in the College.