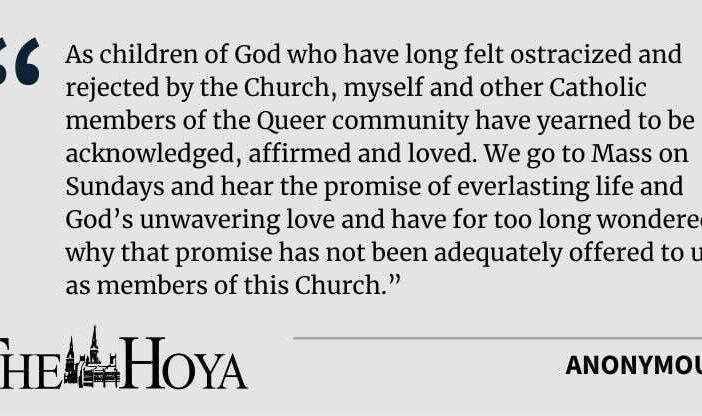 I was born into a Catholic family. I try to go to Mass, even now that it’s virtual, every Sunday. I try to pray every day and nurture a strong relationship with God. I wear a cross around my neck all day and crosses, icons and prayer books are always present in both my dorm and my bedroom at home. On paper, I seem like the perfect devout Catholic.

Except, I’m also Bisexual, and since my first year at Georgetown University, I have openly entered into relationships with male-identifying and female-identifying romantic partners.

And then, reports emerged that Pope Francis was voicing his support for same-sex civil unions to ensure same-sex couples could enjoy the same benefits in society that heterosexual couples have long enjoyed. His statement seemed to break from years of Catholic opposition to same-sex unions of any kind, whether they be directly religious or solely legal. In the words of the Pontiff, “What we have to create is a civil union law. That way they are legally covered.”

Precisely because of the long hostility of the Church against its LGBTQ+ members, the news that Pope Francis supports same-sex civil unions took me and many of my friends in the LGBTQ+ Catholic community by deep surprise. Yes, then-Cardinal Jorge Bergoglio may have voiced support for same-sex civil unions back in 2010. Yes, as Pope, he has already acted with much greater sympathy and compassion toward the LGBTQ+ community than any of his recent predecessors. Yes, now there are attempts by conservative members of the clergy to qualify and reduce his words. Yes, it wasn’t a statement supporting the offering of the sacrament of marriage within the Church to same-sex couples. Nevertheless, the announcement caught me completely off guard and brought me to tears.

I firmly believe my identities as a Queer person and as a person of deep religious faith do not exist in conflict. After all, in Genesis 1:26, God declared “let us make man in our image, after our likeness.” My Queerness is squarely part of the great human diversity that God intended when He created the universe. Additionally, prohibitions in the Abrahmic religions — Judaism, Christianity and Islam — against the LGBTQ+ community, including the oft-quoted Leviticus 20:13, can be traced back to outdated understandings of human reproduction and strictures in early Levantine societies intended to preserve the patriarchy. Because of this misconstruction of scripture, when I examine my conscience, I do not feel ashamed of who I am and who I love. Instead, the Church and its conservative theologians have always been the ones to impose the obligation of shame and silence upon my LGBTQ+ siblings.

As children of God who have long felt ostracized and rejected by the Church, myself and other Catholic members of the Queer community have yearned to be acknowledged, affirmed and loved. We go to Mass on Sundays and hear the promise of everlasting life and God’s unwavering love and have for too long wondered why that promise has not been adequately offered to us as members of this Church. We question how the Church can continue to encourage bigotry within its ranks and how it can cast judgment on us in the middle of its reckoning with its pervasive complicity in sexual abuse. To hear the Pope, who I and 1.2 billion others see as the divinely appointed representative of God on Earth, reiterate his support for the basic human and legal dignity of LGBTQ+ persons gave me hope.

For years, I have wished to proudly and openly live my life as a member of the Church and as a Bisexual man, to marry within the Church and to not worry about judgment and reprisal for the gender and/or sex of my partner. I have wished I could come out fully to my devout relatives and live with total confidence that they would accept the validity of my identity. I have wished that the Church can adequately and inclusively support me and others. I also hope that in the future, I need not worry about writing an op-ed like this anonymously.

In the meantime, I pray, I hope and I carry my cross, imperfectly but with my head raised high, as I am called to do by the Scriptures. And I let myself be filled with God’s light and love. No prejudiced theologian can take that love away from me, regardless of whatever scarlet letters they emblazon on me and my LGBTQ+ Catholic brethren for being born this way.