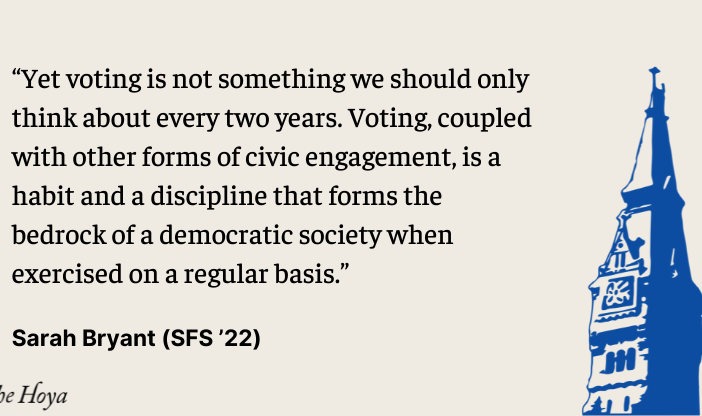 When it comes to voting and civic engagement, there are no off years.

A misconception I hear frequently as a director of GU Votes is that when there are no midterm or presidential elections coming up, no heated prime-time debates or splashy front-page headlines, there is no need to worry about casting a ballot. It’s common for students to assume there’s nothing they can or should be doing when it comes to voting.

Yet voting is not something we should only think about every two years. Voting, coupled with other forms of civic engagement, is a habit and a discipline that forms the bedrock of a democratic society when exercised on a regular basis. In a year without national elections, students should still engage in the democratic process by recognizing the importance of state and local elections, performing other civic actions to hold elected leaders accountable and resisting cynicism about the impact of individual political participation.

First, it’s important for students to stay informed about upcoming state and local elections for the region in which they’re registered to vote. This November, there are gubernatorial elections in Virginia and New Jersey as well as special elections for Congress in two Ohio districts, not to mention local and municipal elections across the country. These state and local elections matter just as much, if not more, than national elections because of their direct impact on local policy implementation. For instance, municipal governments are responsible for measures such as police department budgeting, infrastructure development and education reform.

Students’ participation in local elections is often hampered by a lack of awareness of the deadlines or structural barriers to accessing the ballot box. GU Votes has sought to address these challenges by working with Georgetown’s Office of Federal Relations and the Andrew Goodman Foundation to share state-specific information on voter registration and absentee ballots with students, as well as by providing pre-stamped envelopes in the GU Politics office for mailing forms and ballots. Take advantage of campus resources to register to vote, request an absentee ballot and confirm when elections are approaching. Students can also take steps individually to stay informed of upcoming elections by following local news sources and candidates on social media.

Voter engagement also goes beyond casting votes in each election. When elections aren’t occurring in your locality, consider ways you can hold your elected officials accountable for the issues you care about. This might include calling your representatives, signing a petition or taking part in marches or letter-writing campaigns led by activist organizations. Though some may doubt the efficacy of these actions, a study by the OpenGov Foundation has found that consistent communication and personal stories can actually have a significant impact on members of Congress. While constituents may be less likely to change a representative’s mind on highly politicized issues such as gun control or abortion, voicing concern on less hot-button topics has a considerable chance of success. In the time leading up to elections, you can also educate yourself about specific candidates and the policy issues they stand for to make an informed decision when the election arrives. When you engage in these efforts, you contribute to a culture of democratic participation and public accountability, both critical aspects of a healthy democracy.

Finally, as engaged citizens, we must resist the cynicism of thinking our votes don’t matter. Young voters too often stay home because they think that the system is rigged, that all politicians are corrupt or that they lack the power to actually change anything. We can combat this mindset by thinking of voting as one of many instruments in our toolbox for change and recognizing that voting is a right and a privilege that many are systematically denied. Exercising our right to vote and holding our officials accountable are important ways to recognize the contributions of those who fought for this right.

The path to sustainable change starts with small steps: a vote, a phone call, a signature. Framing these actions as building blocks for larger change can be a powerful motivator for democratic engagement. Keep voting in local elections, keep calling your representatives, keep advocating for the policies you care about — this year and every year — to use your toolbox and to honor the privilege you’ve been given.

Sarah Bryant is a senior in the School of Foreign Service.