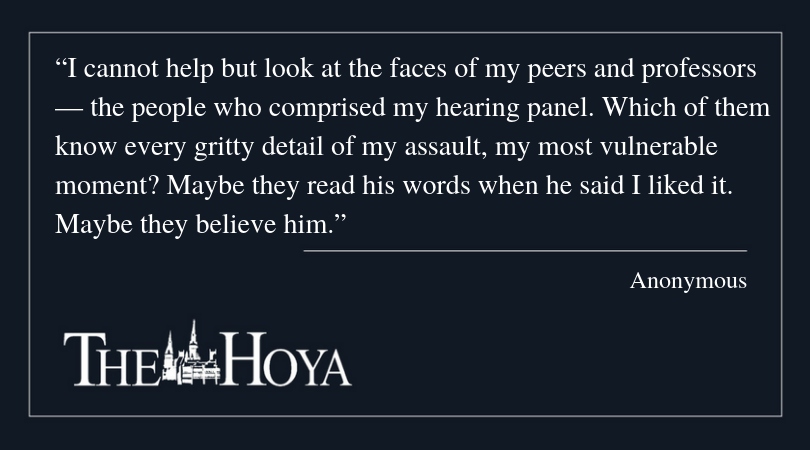 The author of this Viewpoint chose to remain anonymous and wrote with assistance from Emma Oechsner (COL ’21) and a third student, who left Georgetown University in summer 2018 and is referred to by the pseudonym “Annie.” All first-person references should be attributed to the anonymous author.

Blue denim skirt. Vodka on a Village A rooftop. Trapped between an athlete and a brick wall on a twin-sized bed.

I reported to the university what had happened to me a month earlier because I knew it was unjust; Georgetown had just spent weeks informing my whole freshman class about its purportedly extensive resources for sexual assault survivors. Instead, my experience with the university’s Title IX proceedings was assaultive.

I brought my case to Georgetown at the same time as Annie, who had been assaulted by the same perpetrator just before I was.

We brought separate cases to Title IX. The office told us that we could have a friend or trusted teacher as an adviser, but we could not have legal counsel. However, it failed to mention that the adviser could be a lawyer. Not until later conversations with Health Education Services did we learn legal counsel was not only allowed but practically imperative to building a successful case.

The perpetrator had the correct information at least three months before I did, and his parents hired a private lawyer before Annie or I even knew to find one. Amid midterm assignments and without the support of my parents, I frantically searched for pro bono legal counsel. Annie, who had already named a friend as her adviser, was discouraged from switching after she found a lawyer instead. After finally allowing Annie the adviser she was entitled to, the Office of Student Conduct warned her she would not be allowed to switch counsel again.

My preliminary meetings with Title IX officials were conducted without regard for my sensitivity to talking about my assault and without acknowledging the potential that their questions would trigger trauma. Berner asked me what I had eaten and drank, who I had seen, what I had said — every detail of the day I was assaulted. When my answers were inconsistent with information Berner had received, she pressed me and asked if I was “sure” this was the case. I was made to look at a picture of the man who assaulted me. In fact, they took into high consideration details that were tangential at best.

My interviews were like cross-examinations. I was asked what time of day I was in a certain room unrelated to the assault, or whether a photo was taken on Saturday or Monday. I felt like Berner was trying to get me to accidentally slip on tiny, inconsistent details in an effort to dismiss my case.

When a preliminary hearing date was proposed, my pro bono counsel was unavailable. My lawyer urged me to schedule a fake gynecologist appointment in order to get Georgetown to move the hearing date, wasting my time and my doctor’s.

When preparing my statement, the Title IX office removed a line based on its guidelines, which state past sexual history cannot be referenced. This line included a coercive quote from my assailant, which proved the instance inarguably nonconsensual.

Annie and I both lived in the same dorm as our assailant. The standard practice for no-contact orders between victim and assailant in these cases is to have each individual live in a separate building, according to an email to Annie from Heather Kimball. The Office of Student Conduct, however, disregarded its own rules, neglecting to follow up on the order to make sure it was enforceable. Annie lived on his floor, and — with no support from Student Conduct — was left no choice but to move to a new dorm entirely and was banned from her old building, where all of her friends lived.

The assailant’s two cases were kept separate: The hearing panel — made up of one undergraduate student and two faculty members — was not allowed to know he had two cases being brought against him. He was also granted 50 percent more time to respond to emails and interviews than I was, and 50 percent more time to prepare with his lawyer throughout the process. I was never told why these accommodations were made. As a student in the Academic Resource Center, I am granted extra time and testing accommodations, yet throughout my process I was never offered any additional resources.

In both Annie’s and my experiences, several meetings in the Title IX office were dotted with comforting smiles and “you can drop this at any time.”

Between 2014 and 2017, Title IX held only 14 hearings, and only four perpetrators were found responsible, even though 31 percent of undergraduate women at Georgetown report experiencing nonconsensual sexual contact as a result of physical force or incapacitation since entering Georgetown, according to Title IX’s 2017 annual report and Georgetown’s 2016 Sexual Assault and Misconduct Climate Survey.

Annie’s hearing process was over before the end of spring semester, having started in December. Title IX told Annie that the student on Annie’s hearing panel had previously interacted with the perpetrator and asked if Annie wished to replace this student. When Annie and her lawyer confirmed their wish to replace the student with an unbiased panel member, Heather Kimball of the Office of Student Conduct dismissed the request and kept the student who knew the assailant.

The panel ruled her assailant to be not responsible. Annie lost her case because the perpetrator admitted to touching her nonconsensually on the thigh, and when asked by the panel to demonstrate where, she motioned to her upper, outer thigh. According to the university’s sexual misconduct definitions, touching is only misconduct if it occurs on certain specific areas, including the inner thigh or buttocks, but not including the outer thigh. The university was able to manipulate its absurd policies to serve the purposes of a male student with a private lawyer.

My hearing process was drawn out for over nine months. Title IX consumed my entire freshman year and beyond: Georgetown placed the burden of cost on my shoulders when it asked me to stay in Washington, D.C., after the school year ended for my hearing, which would have required me to fly back from studying overseas during the summer. The university was wholly unsympathetic to my desire to keep the situation private from my parents.

Georgetown also never alerted me when Laura Cutway, the Title IX coordinator, quietly resigned over the summer — during my proceedings. The entire process was completely unclear: Which office or person was handling what job? What, in fact, was the process I was meant to follow? What was I allowed to do, and for what could the university take responsibility? I still can’t tell you.

By the beginning of fall semester, I could not take the weight and disappointment any longer. I did what the office seemed to want me to do all along: I dropped my case. I could not let my assault be my Georgetown story; I had already lost a full year begging for unforthcoming relief from an endless nightmare.

When I went to officially withdraw my case in September, I was informed by Director of the Office of Student Conduct Judy Johnson that the university had the option to pursue the case on my behalf but had chosen not to.

The university may move forward with an investigation without the person who filed the complaint if “there is a community safety concern,” according to Title IX’s stated policies.

When I walk across campus, I cannot help but look at the faces of my peers and professors — the people who comprised my hearing panel. Which of them know every gritty detail of my assault, my most vulnerable moment? Maybe they read his words when he said I liked it. Maybe they believe him.

Georgetown’s system of trial by peers is not like that of a court system, where members of a jury have never met the defendants: It is cruel and inevitably biased, a complete violation of students’ privacy. Survivors may feel they are being violated all over again.

Coming forward to the university was difficult. Speaking out publicly now is even more so. But our university community and the national community must learn how gravely Georgetown is failing its survivors. The university must act as an institution for all its people: It must care for the entirety of its student population, so its students can care for their whole selves.

In our experiences, the university acted solely, intentionally and recalcitrantly in the defense of a white man with money. Georgetown must act immediately to remedy its violent deficiencies, lest we help elevate another Brett Kavanaugh or Bill Clinton (SFS ’68) from the Hilltop to the highest offices in the United States.

The author also encourages readers to follow @georgetownsurvivors on social media, where stories of brave survivors on campus will be shared to raise awareness of how common and persistent this problem is and what we can all do to contribute to a comprehensive solution. Stories can also be submitted here. Finally, the author asks readers to support the work of GUSA’s gender equity team, which will be pushing for reform to the Title IX process, university policy and resources for survivors.