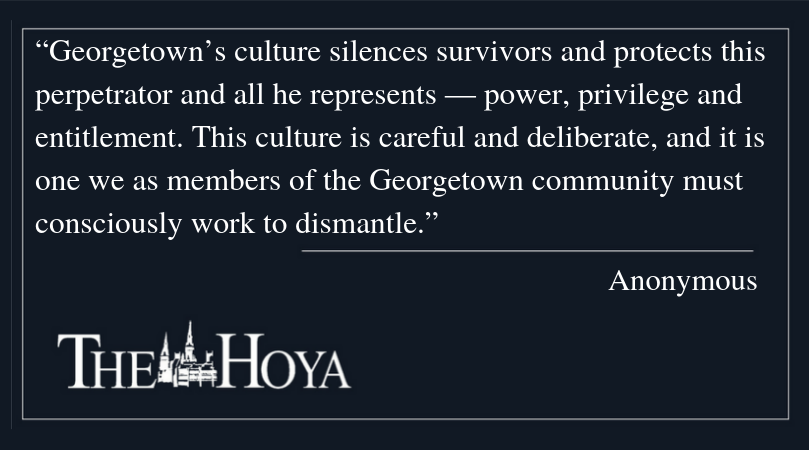 The author of this Viewpoint chose to remain anonymous and wrote with assistance from Emma Oechsner (COL ’21). All first-person references should be attributed to the anonymous author.

You may have noticed the parade of blue flags lining Copley Lawn earlier this week. It is difficult not to. Unless of course you’re doing so intentionally — which seems to be a pervasive theme at Georgetown University.

The flags represent the thousands of students who have reported experiencing sexual harassment at Georgetown.

“This one’s you, and that one’s me,” my friend joked, pointing to two of the flags as we walked across campus.

You may recall an anonymous op-ed published in The Hoya last fall in which two survivors described their experiences with Georgetown protecting predators despite its promise to support survivors.

The accused perpetrator from the November op-ed is still a Georgetown undergraduate. He has in no way changed his behavioral patterns.

His continued presence on campus, despite several formal Title IX complaints against him, poses an active threat to women at Georgetown. The university’s systemic negligence is dangerous for all survivors of sexual assault and interpersonal violence.

The university continues to allow his pervasive misconduct that, coupled with his colossal wealth, provide him with a safe harbor in a system that was built for him.

It is hard to describe the mix of anger, fear, dread and defeat I felt when he approached me a few weeks ago for the first time since he assaulted me in the fall of my freshman year.

He said he’d heard where I was planning on studying abroad next semester. He said he’d see me there.

A few days later, I reached out to the Office of Global Education with concerns about both his presence at Georgetown and his admission to this particular small, secluded program where avoiding him would be virtually impossible. After speaking with others also planning to study abroad there, I learned I was not the only one with concerns: Several of them had also met with OGE’s regional program adviser to express their fears.

OGE suggested we defer our acceptances to the spring semester or look into other study abroad programs — the regional adviser even offered to waive the application late fee.

I then presented a letter to OGE signed by nine students on the trip, stating that if he was permitted to study abroad with this program, we would all rescind our decisions to do the same. A week later, OGE replied:

“The student about whom you’ve raised concerns has elected to withdraw from the program and will not be studying [at this program] in the Fall 2019 semester,” the regional program adviser wrote.

After OGE sent its response, a student leader from Georgetown Survivors’ advocacy team met with officials in the Office of Student Conduct to raise concerns about the existence of several allegations of sexual assault against this single perpetrator. The student asked if anything could be done to prevent more harmful behavior by this individual.

The officials suggested that each allegation against the perpetrator be presented as a formal complaint by each of the survivors, but they admitted that these complaints could only lead to university-sanctioned repercussions if he was found guilty as a result.

Yet two complaints have already been filed against this perpetrator — and zero have found him guilty, on various technicalities. Georgetown’s Title IX conduct process has shown how it sets survivors up to fail: The existing student conduct system does not operate in a way where it can accurately determine innocence or guilt. It is broken, and in the process of trying to achieve “fairness,” it breaks.

My intention was not for the predator to be removed or elect to “withdraw” from the program, only to see him attend classes comfortably on Georgetown’s campus. He has proven himself to be an imminent threat to community safety — as evidenced by the multiple Title IX complaints and the nine people who spoke up against his presence on the trip.

In allowing the perpetrator to remain on campus despite being made aware of his persistent predatory behavior, the university continues to gravely fail its survivors.

Were this institutional apathy unintentional, I would think it a matter of horrific incompetence. But Georgetown’s culture silences survivors and protects this perpetrator and all he represents — power, privilege and entitlement. This culture is careful and deliberate, and it is one we as members of the Georgetown community must consciously work to dismantle. When Georgetown fails to take tangible action, we must hold our school accountable.

Perpetrators are being found innocent, and without a record, they can receive acceptance into study abroad programs, clubs and resident assistant positions.

Georgetown, do better. Your systems are still failing.

And to the perpetrator: It is not vengeance we seek, nor even justice. There can be no justice, because what you’ve done cannot be undone. Your impact was so emotionally draining that I found difficulty in even the most habitual of tasks: getting out of bed; checking my email; showing up to class and to work; breathing. While the pain you caused diminishes with time, it never goes away.

Your story is still being told because of what your actions represent: the white supremacy, classism, toxic masculinity and misogyny that exist not in a vacuum, but on our Hilltop. Georgetown may not acknowledge the consequences of your actions, but they will stick with me for the rest of my life.

Resources: On-campus confidential resources include Health Education Services (202-687-8949 or [email protected]) and Counseling and Psychiatric Services (202-687-6985); additional off-campus resources include the D.C. Rape Crisis Center (202-333-7273) and the D.C. Forensic Nurse Examiner Washington Hospital Center (844-443-5732). If you or anyone you know would like to receive a sexual assault forensic examination or other medical care — including emergency contraception — call the Network for Victim Recovery of D.C. at 202-742-1727. To report sexual misconduct, you can contact Georgetown’s interim Title IX coordinator at 202-687-9183 or file an online report here. Emergency contraception is available at the CVS located at 1403 Wisconsin Ave NW and through H*yas for Choice. For more information, visit tinyurl.com/GUselfcare.