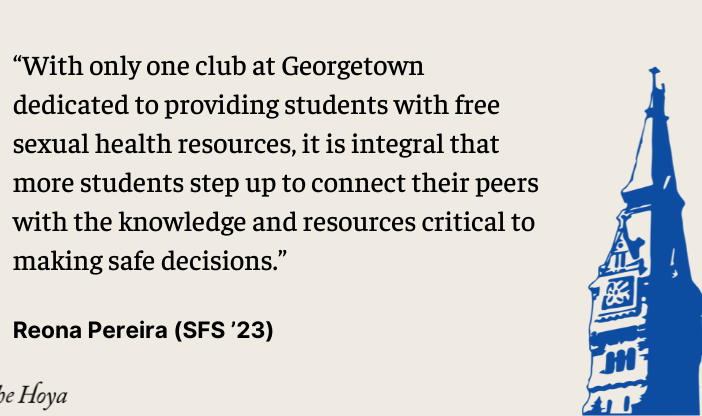 It may be no surprise that Georgetown’s Catholic-Jesuit identity prevents the university from distributing condoms to students. However, it is surprising that one of the only places to get free condoms on campus is at the H*yas for Choice table in Red Square, where a majority of the rubbers are donated by Trojan Brand Condoms through the Condom Collective, a program by Advocates for Youth.

Regardless of how contraceptives are perceived, they are a matter of health, and access to them is a right that needs to be protected. College is the first time most young people navigate the world without the guidance of their parents or close adult figures, so it is integral that students have the choice to make independent decisions and stay safe from sexually transmitted infections and unplanned pregnancies. By joining sexual health advocacy programs and helping to distribute free condoms on campus, students can safeguard their right to sexual autonomy and work to create a safe environment, with access to necessary resources, information and support regarding their sexual health. The research is clear: exclusively preaching abstinence to college students is not effective and alternative means of encouraging safe sex are needed.

Alongside the work of H*yas for Choice, a handful of students on Georgetown’s campus have taken it upon themselves to creatively work around the university’s free speech rules, which allow students to post any materials that express personal views on their dorm doors. Their efforts involve placing envelopes of condoms on their doors for other students to easily access. Nevertheless, there are not enough reliable avenues to access contraceptives on campus. With only one club at Georgetown dedicated to providing students with free sexual health resources, it is integral that more students step up to connect their peers with the knowledge and resources critical to making safe decisions.

As a first-year on campus in 2019, I had no idea where to find condoms. I wasn’t bombarded with flyers, information sessions about safe sex, or social media posts related to contraceptive access. Only after hearing about H*yas for Choice’s tabling program in Red Square from 10 a.m. to 5 p.m. on weekdays did I learn where I could reliably get free condoms. However, the fear of being seen by passers-by discouraged me from walking over to the table. I doubt I was the only student who felt this way, especially given how intimate and personal one’s sex life can be. Picking up condoms in Red Square almost felt like telling the world “Hi, I might have sex tonight and if I do, it’ll be safe sex.” Thanks to Trojan’s donated condoms, H*yas for Choice has distributed up to 10,000 condoms during a single semester, so there is no question as to whether or not demand exists. But H*yas for Choice can’t single-handedly provide a condom to every student in need. Thankfully, the Condom Collective Program, which sends 1,000 students a box of 500 condoms each, is continually helping to meet that demand. Students can help the program by applying to be condom distributors for their college campus each semester when applications open up in August and December. Along with spreading more awareness about the importance of condom use and where to access them on campus, Georgetown students can work to foster a more open and safe space to talk about sex and contraceptives. The stigma that surrounds such conversations is partly to blame for the lack of knowledge among students. Joining programs like the Condom Collective, speaking openly about sexual health and directing people to resources they need will make tangible differences in protecting student health and autonomy. Even the smallest action, like letting friends know that there’s a box of condoms on your door, can have the greatest impact.

Reona Pereira is a junior in the School of Foreign Service.