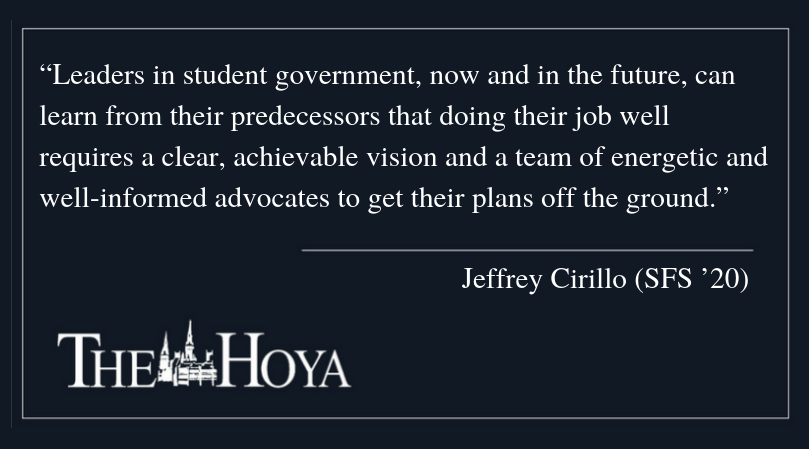 When students talk about the Georgetown University Student Association, most often they remark offhandedly either that “GUSA doesn’t do anything” or “GUSA doesn’t matter.”

The reality is not nearly as bleak: Students in GUSA can, and regularly do, accomplish meaningful change. The problem is partly perception: Students rarely know about the work student government does for them out of the public eye and they know even less about what student government did before their time.

Just in the last five years, GUSA has won little-known but crucial achievements that still benefit students today. Five years ago, GUSA blocked a proposal that would have forced students to spend their entire undergraduate careers in on-campus housing, according to GUSA executive’s midterm report. Two years later, GUSA fought university efforts to convert Brown House and other student townhouses into faculty buildings. Kehoe Field, a shuttered auxiliary athletic field on top of Yates Field House, is soon to reopen because GUSA and other student leaders pressured the university for years to repair it.

However, the student association has recently slid into disarray. Many formerly active members of GUSA have headed for the exits as internal dysfunction and publicized resignations have hobbled GUSA’s ability to play a meaningful role on campus. Students, meanwhile, have spoken with their silence: Voter turnout hit historic lows in recent elections, including the executive election this spring. An anonymous group of students recently suggested abolishing GUSA altogether.

The challenge of the current GUSA executive is rebuilding student government to its prior strength. The executive has the opportunity for a legacy in showing campus that GUSA can be effective again, starting by setting an agenda of impactful reform on major issues of student interest, including improving campus facilities and addressing flaws in Georgetown’s Title IX process. Just as importantly, the current GUSA executive must recruit a strong bench of advocates to join student government.

Enushe Khan (MSB ’17) and Chris Fisk (COL ’17), arguably the most effective GUSA president and vice president in recent memory, should be a guide for their successors. They racked up achievements because they more or less turned student advocacy into a full-time job. They learned the issues in and out, worked long days and nights, and kicked down doors to get into the meetings where important decisions were made. Dining improvements and a fair campus plan are just two of their many lasting legacies.

For another recent case study in good government, students should look to Hoya Hub, an on-campus food pantry opened last October. Hoya Hub exemplifies the best of the student association’s ability to serve other students: It is a well-suited solution to a real need — food insecurity — and it was executed patiently, with the input of all relevant stakeholders and countless hours of careful planning.

Crucially, nothing Khan and Fisk accomplished would have been possible without a strong team behind them. The onus is on GUSA’s current leaders to actively recruit passionate students to join policy teams and run in future elections. They should fill their senior staff and policy teams with a slate of bright and energetic advocates, particularly proven leaders in other campus groups and communities.

Recruiting talented students to join GUSA will pose its own challenges. Many potential advocates may hesitate to join what seems like a sinking ship and opt instead to pursue internships or join preprofessional clubs rather than student government. Current leaders will have to compete with those alternatives by convincing new recruits of the worth of student government. With a clear and achievable vision, strong student government can make a real difference.

Leaders in student government, now and in the future, can learn from their predecessors that doing their job well requires a clear, achievable vision and a team of energetic and well-informed advocates to get their plans off the ground. If all goes well, these younger students will be well-prepared to take the reins of student government when the time comes for a next generation of leaders.

Jeff Cirillo is a junior in the School of Foreign Service.