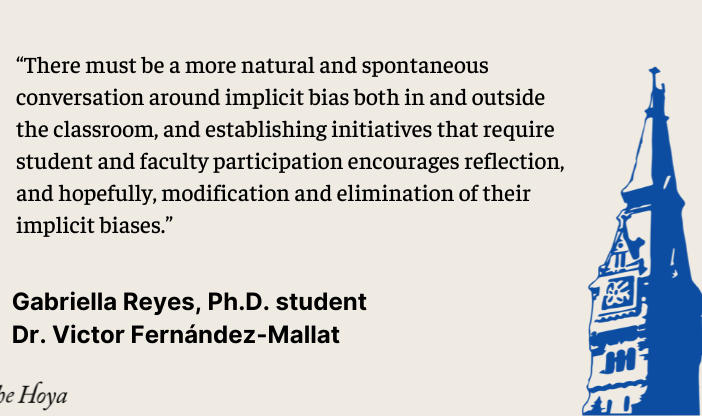 In every arena, from educational institutions like Georgetown University to workplaces, implicit biases can cause people to engage in discriminatory behavior without conscious intent. These biases are often aimed at people of color in the United States and have a harmful impact socially, financially and professionally.

Many institutions, including universities and corporations, are aware of these biases and have made efforts to center their discussions on diversity and inclusion initiatives on implicit bias and its repercussions. However, employment equity statistics still reflect the prevalence of implicit racial biases.

Demographic information from the United States Bureau of Statistics demonstrates clear job equity discrepancies. Black and Latinx people primarily work in blue-collar jobs, which typically are lower-skilled, lower-paid and more dangerous. Furthermore, Black and Latinx people have median yearly earnings of about $45,870 and $55,321, respectively. By contrast, white people dominate white-collar jobs in the U.S., and the educational skill set these occupations require allows white people to have a median income that, at $74,912, is approximately $20,000 more than that of Latinx people and $30,000 more than that of Black people.

It is crucial to acknowledge that these findings reflect symptoms of sticky floors and glass ceilings, which originate in collective biases against minorities and contribute to racial inequity. These job equity discrepancies correlate with implicit biases that remain prevalent in the U.S. They hinder equal opportunity in many areas, including employment leading many institutions like Georgetown University to establish diversity and inclusion initiatives.

For example, Georgetown has offered continued training opportunities on implicit bias in the community for staff and faculty, required training on implicit bias for all Georgetown University Police Department officers and provided online courses on preventing discrimination through the Office of Institutional, Diversity, Equity and Affirmative Action (IDEAA).

After looking at all of this data, we wanted to test whether Georgetown’s initiatives have been effective in dismantling inherent biases among students, staff and faculty. To begin exploring this issue, we conducted an implicit association experiment among 96 Georgetown students of varying ethnoracial and gender identities. Participants listened to voices that represent groups of a given racial demographic because they contain phonetic features that are characteristic of these demographics and were asked to make judgments about these voices. We asked these students to attribute each of the eight voices — both male and female Black, Latinx, white northerner and white southerner — to an occupation, which we categorized into lower-paid jobs, like a security guard and a delivery person, and higher-paid jobs, such as a lawyer and a marketing manager. Finally, we conducted statistical analyses to examine latent associations between the different voices and occupations.

The results of our statistical modeling show that the probability that the surveyed students associated Latinx, Black and white southerner-sounding individuals with lower-paying jobs averaged 75%, yet only 30% for white northerner-sounding speakers.

Despite the steps the university has taken to attenuate the effects of implicit biases, our results suggest that these initiatives have failed to entirely diffuse biases toward minoritized groups on the implicit level in the Georgetown community.

Georgetown must develop more vigorous measures, including the implementation of mandatory implicit bias training for students, staff and faculty, increasing scholarship funding for students of color so that their representation on campus can reach the national average and elevating more people of color to visible positions, such as president of GU, leadership positions in student organizations and faculty department heads.

Requiring completion of the training programs that Georgetown offers through the IDEAA would compel members of our community to consider their biases and promote open discussion. There must be a more natural and spontaneous conversation around implicit bias both in and outside the classroom, and establishing initiatives that require student and faculty participation encourages reflection, and hopefully, modification and elimination of their implicit biases.

While the university’s policies still have room for improvement, these modifications can be a catalyst for change that creates a fairer and more equitable campus community.

Gabriella Reyes is a Ph.D. student studying Spanish Linguistics. Dr. Victor Fernández-Mallat is a professor in the Department of Spanish and Portuguese.