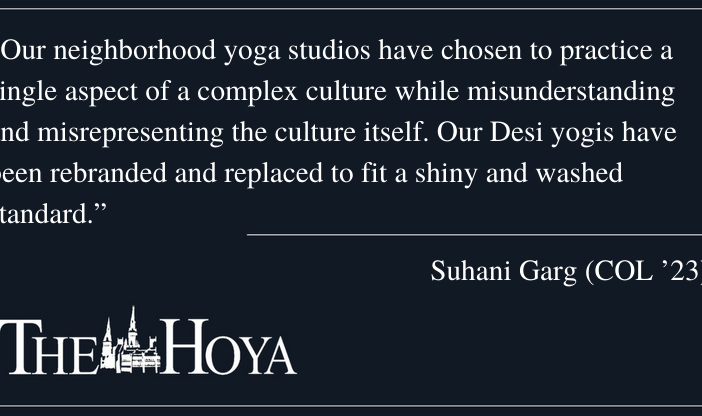 I have long struggled with sharing certain elements of my culture. Whether it is a bindi at Coachella or the art of mehendi turned into summer “henna tattoos,” forms of appropriation, defined as “the act of taking or using things from a culture that is not your own, especially without showing that you understand or respect this culture,” seem to have taken the place of voluntary cultural exchange. Having grown up in South Asia and lived in various regions of India, I have seen how enthusiastically my culture welcomes foreigners into our celebrations and practices. However, something about watching my white peers get trained as yoga instructors and claim to “channel their inner patangali” — all while misspelling Patanjali — has never sat right with me.

It is much easier to recognize the appropriation of objects like a colored dot on the forehead or a religious tapestry, as the reduction of meaningful cultural symbols into mere aesthetic is visible. But the appropriation of centuries-old spiritual practices is more convoluted. South Asian spirituality has been grossly misrepresented in the Western world, stripped of its foundations and placed into a cultish, polytheistic category. Through centuries of colonialism, Europeans ascribed titles such as “Hinduism” and “caste” to a culture that initially knew no such words, and consequently outsiders could pick and choose elements of South Asian practices to appropriate.

To understand the practice of yoga, it is important to understand what the term truly means. The word “yoga” comes from the Sanskrit word for “union,” but there are many different schools of yoga and therefore many different meanings for the term. According to tradition, each yogic school is a pathway toward liberation or escape from suffering, namely the paths of knowledge, devotion, selflessness and meditation. What we know as yoga in the West is a diluted form of raja yoga, the path of meditation. In Dharmic traditions, liberation is rooted in equanimity. The irony is that yoga in the West has been commodified into a consumable subscription, exploited as and when desired.

The Westernization of yoga is clearly a matter of appropriation, not appreciation. Culture appreciation typically occurs when members of a culture invite an outsider to celebrate an aspect of their culture alongside them, but how many times have you seen a South Asian person on the cover of a yoga magazine? The colonized tradition of yoga in the West is, in fact, not yoga at all. Local yoga studios like Corepower Yoga do not have authority on or knowledge of the roots of yogic philosophy, nor do most white instructors in these spaces. These studios promote workout classes, not schools of yoga. The mindfulness and tranquility that is central to yoga dissipates when the practice is set to workout music and disconnected instructors who speak through the entire session.

Our neighborhood yoga studios have chosen to practice a single aspect of a complex culture while misunderstanding and misrepresenting the culture itself. Our Desi yogis have been rebranded and replaced to fit a shiny and washed standard. Our original yoga, a spiritual discipline intended to lead practitioners toward detachment from the material world, has turned into another facet of consumerism.

Whitewashing takes place when Western ideals are infused into cultural practices as a means to “improve” them. But the assumption here is that white is better.

The white man’s burden has always been seen as the responsibility to guide inferior people in how to live the right way — the better way. Our local yoga classes, in their erasure of supposedly inferior cultural roots, embody this colonial mindset.

The real white man’s burden is the inconvenience that arises when other cultures do not cater to him. To solve this problem and maintain his superiority, he must change and erase parts of that culture. The problem is that this whitewashing occurs in self-interest.

I understand there are good intentions behind the adoption of yoga. Over time, the Western world has realized the transformative effects of meditation, even if colonialism initially debunked raja yoga as a meaningless ritual. There is no easy way to tell my peers that their occasional partaking in an activity with mental and physical benefits is rooted in ignorance. But although it is not the intention, the whitewashed practice of yoga continues to embody colonialism, as it unrelentingly centers whiteness and Western self-interest. By co-opting and simplifying an elaborate tradition into an hour-long Sunday class, we have lost yoga’s meaning and purpose.

Suhani Garg is a freshman in the College.