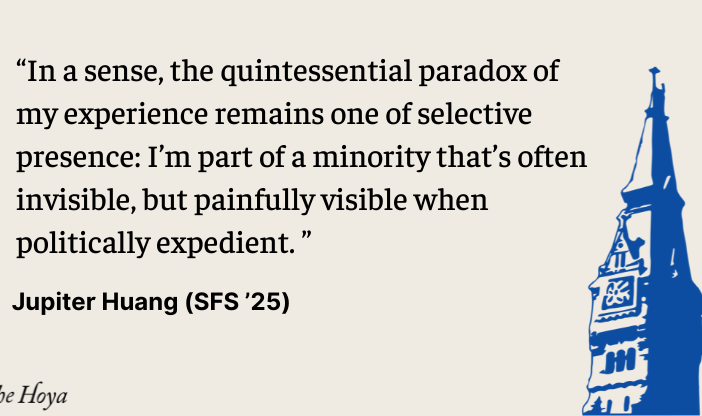 The hallmark of my Asian American experience has been one of paradoxes, often subtle, sometimes blatant, that contribute to the crisis of identity that I currently grapple with. I expect that struggle to continue, perhaps unceasingly so.

My experience in the United States has centered around my identity as an international student. My first vivid recollection of high school is sitting in a bare, empty room at my boarding school, unpacking my airplane models and books, distracting myself from the fact that I would forever study, and perhaps live, 8,000 miles from “home.”

“Where are you from?” That simple question never ceases to stab me with a twinge of trepidation, sometimes coupled with regret, uncertainty and even emptiness. I’ve always been the “American” kid to my friends back home and in my extended family, yet I found it distinctly more comfortable to classify myself here in the United States. as being from Guangzhou, China. I’m constantly foreign to places that I could have perhaps called home. The international student communities I’ve been lucky enough to find bond over this shared sentiment, forming another home within a sea of estrangement. Still, it often only conceals the feeling of untethered-ness that comes from your family being 12 time zones and a firewall away.

As a Chinese American in particular, cultural and political conflict permeates my experience. Here in the States, I often find myself one of the few mainland Chinese students in the room; as such, a wave of expectation follows me whenever someone raises dogged questions on the policies of the Chinese Communist Party. It never escapes me that I constantly confront two clashing ideologies that may never align. It’s a strange prospect to explain why I prefer to live in the United States, a country constantly working to find its identity within the many contradictions between varying individual freedoms. Yet it’s stranger still to portray the realities of living within an authoritarian country where a predominant culture with different priorities largely embraces obedience — coming at the cost of willful ignorance and a woeful lack of individual agency — in return for the promise of security and stable growth.

The intricacies of fitting into racialized and politicized spaces grows out of these conflicts. Asian Americans, while a group diverse far beyond public recognition, aren’t a comparatively large minority community in the United States, numbering around 7% of the population. Thus, the temptation to just disappear into the background, coveting the social and financial stability of finally beginning to fit into the “American” story, easily jeopardized by standing out, looms ever-present. The lack of media representation and the lack of Asian stories brought to the forefront of popular and literary culture, trends that are just now beginning to fade, only perpetuate the subconscious pressure to confine ourselves to established routes, thinking that the true respect we’ll get must come through silently building familial wealth.

Moreover, the past few years have compounded the difficulties of being Chinese American; if the chilling rise in hate crimes has taught me anything, it’s that my very appearance and presence remains intricately tied to the growing conflict between the United States and China. This would be an easier dilemma to deal with if our cultural heritage didn’t so strongly intersect with the history of our civilization. I can’t deny that I feel pride when I’m cruising at 200 miles an hour across the Chinese countryside, or watching entire skies of gleaming glass and concrete rise around me. At the same time, these thoughts are caught in the crossfire of increasing antagonism as ideological differences between the East and the West become harder to ignore. In my experience, there’s always been a palpable, though often subtle pressure to conform, and I face questions that are intrinsically hard to answer. Where do I fit into the American narrative? Will I ever become American enough? What does that even mean?

In a sense, the quintessential paradox of my experience remains one of selective presence: I’m part of a minority that’s often invisible, but painfully visible when politically expedient. A movie with Asian representation or an award-winning novel by an Asian American author doesn’t automatically change that.

We must reckon with the conflicts that threaten the stability of Asian American identity, and that reckoning can and should start in spaces like Georgetown. Through vastly expanding our Asian Studies course offerings, building politically vocal affinity groups, and most importantly, and through conscious efforts by students and faculty to understand the diversity in Asian stories and raise awareness around the issues this growing community faces, we can play our part in promoting true multiculturalism in this nation.

Jupiter Huang is a first-year in the School of Foreign Service.