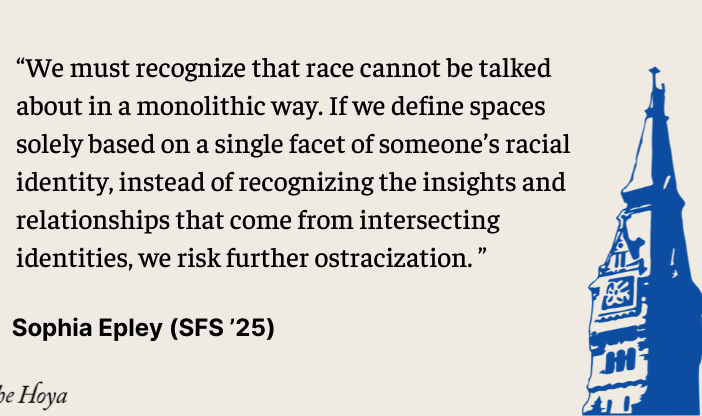 As the only daughter of a Chinese-American mother and a white father, my racial identity has always been at the forefront of my insecurities. In a world that’s becoming increasingly conscious of the role that race and ethnicity play in shaping certain communities, individuals who identify as multiracial can feel ostracized.

The percentage of the United States population that identifies as multiracial has grown exponentially in the last few decades. In particular, according to the U.S. Census Bureau, the population of adults with both white and Asian backgrounds increased by 87% percent between 2000 and 2010 and continues to be one of the fastest growing demographics in the U.S. In places like Hawaii, the prevalence of half-Asian and half-white people has influenced the local language. The term Hapa is used to describe mixed-race people and usually refers specifically to half-white and half-Asian people. This demographic became common in Hawaii as guest plantation workers from the Philippines, Korea, China and Japan began to marry white women. While the term was initially a shortened version of a derogatory word, it is now a word that people all throughout the U.S. embrace as a way to describe their identities.

People who identify as Hapa find themselves in an interesting dilemma, as the majority are not white-passing and yet still feel unable to fully claim the minority side of their identity. On a personal level, I feel extremely proud of my Asian American identity, but I also feel like I’m not fully worthy of speaking out on issues facing the community.

In spaces dominated by Asian Americans, I often don’t feel Asian “enough” and focus on my brown hair and white last name. In spaces dominated by white people, especially at Georgetown, I feel as if I am “too” Asian and am insecure about the parts of me that make me stand out. For a long time I envied my parents for the simplicity of their racial identities, and tried to suppress parts of my own identity to fit in.

This pattern of trying to pick and choose parts of our racial identity is a common occurrence in the Hapa community. Most spaces, whether it be in higher education or politics, are still dominated by white people, and as a result, many Hapa people try to suppress their Asian American identities in order to assimilate. This issue is exacerbated by the fact that many Hapa people do not feel like they have a safe space among Asian Americans to discuss their experiences with racism and white supremacy.

The U.S. Census Bureau found that the majority of Hapa people identify more with their white side than their Asian side. In a society that marginalizes anyone who is not fully white and looks “different,” this identification does not prevent individuals from being victims of discrimination and oppression. If we are to truly deconstruct systems of racism, we need to present a more united front, in which people embrace the minority sides of their identity instead of seeking out whiteness.

For me, the process of integrating myself further into the Asian American community was accelerated after being confronted on the street with racial slurs and blamed for the “China Virus.” I hope that it does not always take a traumatic experience like this to facilitate this process among other members of the Hapa diaspora.

Conversations about diversity, equity and inclusion often fail to acknowledge the intersection between different groups, as well as the experiences of people who do not fit cleanly or feel fully accepted into one. This lack of nuance can lead to a perceived rejection of those who are not fully part of that demographic.

We must recognize that race cannot be talked about in a monolithic way. If we define spaces solely based on a single facet of someone’s racial identity, instead of recognizing the insights and relationships that come from intersecting identities, we risk further ostracization.

For my fellow Hapa and multi-racial people, it is important to remind ourselves that coming from multiple racial and cultural backgrounds should never be something that prevents us from engaging in conversation and activism regarding race. We cannot pick and choose facets of our identity based on the spaces we are in. At the end of the day, we will always be multiple things. That is perfectly okay.

Sophia Epley is a first-year in the School of Foreign Service.